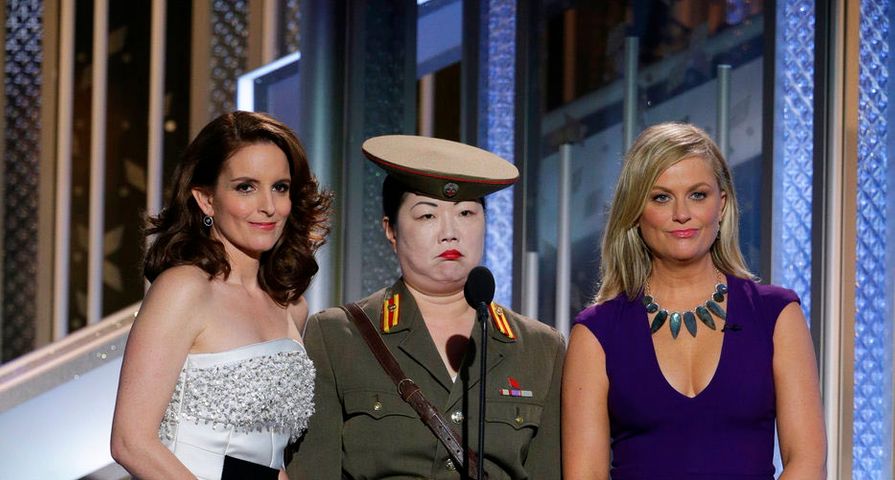 While many are praising the work of Golden Globes hosts Tina Fey and Amy Poehler for the third consecutive year, many fans of the awards show are also complaining that this year’s show lacked the entertainment and shocking jokes to keep the event lively and entertaining.

Although the word boring is being used in conjunction with the awards, there was at least one joke that has garnered a lot of attention from fans over social media.

Comedienne Margaret Cho joined the two other funny women as part of a bit poking fun at the drama surrounding North Korea’s condemning of the Sony film, The Interview.

Cho showed up in character as North Korean General Cho Young Ja who demanded a picture with actress Meryl Streep and even goose-stepped off the stage after calling the lesbian relationship on Orange is the New Black, “very toxic” and also had the last words of the show stating, “Show over. I host next year. Good night.”

While some took the bit as merely satire, many others did not agree, writing things like, “Wow this is some of the most racist s–t I’ve ever seen on tv @margaretcho. Didn’t you fight your whole career to avoid being a stereotype?”

After many similar reactions were posted, Cho finally responded by posting on her own Twitter, “I’m of mixed North/South Korean descent – you imprison, starve and brainwash my people you get made fun of by me #hatersgonhate #FreeSpeech.”

Also Check Out: Golden Globes 2015: The 7 Best And Worst Moments