For many, it didn’t come as a shock that Jessica said “I cannot” instead of “I do” to Mark during her Love Is Blind finale wedding. All season long, viewers watched the then-34-year-old struggle to get over the 10-year age gap with the then-24-year-old Mark. Yet, she still put on her wedding dress and walked down the aisle, only to break up with Mark at the altar in front of their closest friends and family.

What comes as a shock is Jessica actually tried to end things with Mark before the wedding – by exiting the show. In a recent interview with Entertainment Weekly, the outlet asked the Love Is Blind star if she was given the opportunity to end the relationship with Mark before filming the wedding or if she had to walk down the aisle (to either get married or end things, knowing that she had to make up her mind before the ceremony).

“I don’t know I’m allowed to answer that question,” she said after a pause, before a Netflix rep gave the okay to answer. “Okay. Yeah, I mean, I had to stay. I definitely had a conversation about leaving and I wasn’t able to do that. My dog got sick too, and almost died during the show, I had so much other stuff going on.”

In a recent Instagram post, Jessica detailed how her dog Payton “ingested a very small piece of a stick” which required life-threatening surgery during filming. “Every night after working and filming my struggles with whether love was blind or not, I would go lay with her in the ICU cage and every night I thought would be the last time I would see my pretty girl,” she wrote on Instagram. “This went on for ten days.”

Despite knowing that her relationship with Mark wasn’t going to result in an “I do” and having to go through with the motions of wedding planning and participating in it on camera was “tough” she admitted with a laugh.

“It was psychological warfare, for sure, because planning a wedding is stressful enough, I hear,” Jessica said. “But when you’re planning a wedding with someone that I knew I didn’t want to marry him, we weren’t ready for that, and we actually had multiple conversations and we were both on the same page about that. We weren’t ready to marry each other in that allotted amount of time that we had. We were very much on the same page about that.”

“You’ll see at some point in the show I start to relax a bit; that’s after we had those conversations and I felt like, well, at least we’re on the same page,” Jessica continued. “Then I started to really warm up to him a lot more actually. It was super stressful just being in a situation where you can’t leave, the pressure’s on, you’re planning a wedding, and you know the ending, right? But he and I really wanted it to be a positive thing too, because we had found each other and we had such a strong friendship and we were definitely connected for a reason. We definitely had love for each other, I just wasn’t fully in love with him so planning a wedding was a really, really difficult thing to do.”

Now with her stint at Netflix’s Love Is Blind being over and watching some episodes herself, she says, “It definitely was a bit shocking initially because what you see portrayed [of me] is more of a one-dimensional character. It’s based on the theme of the show, which makes sense. It was definitely hard to see kind of a one-dimensional person and other parts of my personality not necessarily shine through. But Mark and I were so in our relationship that it was really interesting to see how all of the other relationships have played out, and similarities and differences.”

However, from what she’s seen of the episodes, it has not changed how she views her relationship with Mark. The two recently reunited for the Love Is Blind reunion show (which is set to debut on Netflix’s reunion channel on March 5), but have been texting each other before then.

“I know he’s had some stuff going on in his personal life so we’ve just been texting back and forth,” Jessica revealed. “But before that it had been a while since we’d spoke. We had some off the record conversations on multiple occasions that we weren’t ready to get married, so that wedding day was a big surprise to me. It was pretty traumatic with how that went down. We didn’t talk for a while but when I saw him last week, we’ve been chatting back and forth, I have nothing but love for him. He and I weren’t meant to be but I’d love to continue a friendship with him.”

The first season of Love Is Blind is available to stream on Netflix. 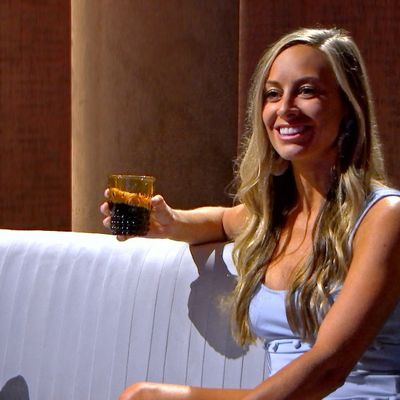