Kelly Ripa Does Solo Monologue, Talks About Respect In First Day Back To Live 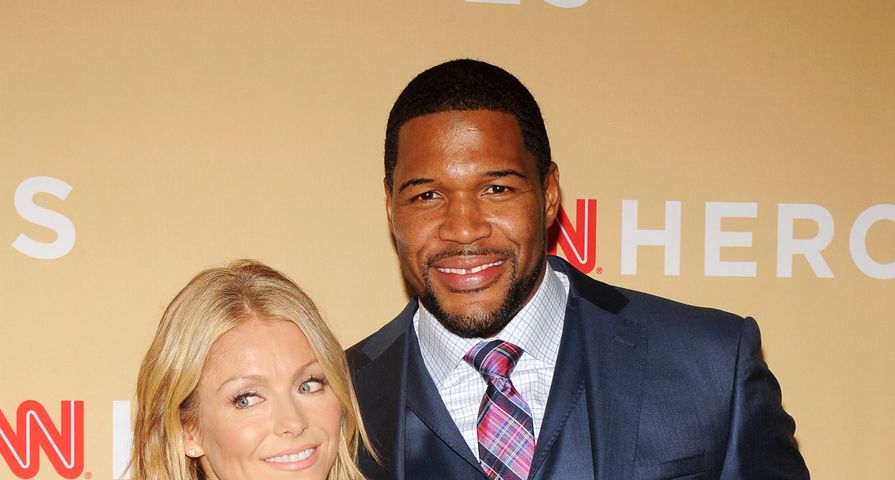 As promised, Kelly Ripa returned to work as host of Live With Kelly and Michael on Tuesday, April 26 following a firestorm of controversy after last week’s surprise announcement that her co-host Michael Strahan was being shifted over to host Good Morning America instead. While Ripa never spoke out, her early vacation along with reports that she was angry and blindsided by the news made it clear her return to Live might be awkward; however, she took it all in stride, and did not shy away talking about it all.

Strahan and Ripa walked out holding hands and then Ripa stood solo onstage while the audience gave her a standing ovation. “Guys, guys, guys. Guys, guys, guys, our long national nightmare is over,” she joked with her guests. “Please, be seated. Look, I am not — I’m going to be completely honest. I’m fairly certain that there are trained professional snipers with tranquilizer darts in case I drift too far off message. OK. I first want to honestly, sincerely thank you for welcoming me back to the show. The show of support through this bizarre time has been really overwhelming. I really — I needed a couple of days to gather my thoughts after 26 years with this company, I earned the right.” She then opened up about taking time off following the major news, beginning with, “I gained some perspective. I always speak from the heart. I didn’t want to come out here and just like say something I might regret.”

She continued, “So what transpired though over the course of a few days has been extraordinary in the sense that it started a much greater conversation about communication and consideration and most importantly, respect in workplace. And since we’re being honest, I don’t consider this just a workplace. This is my second home. This is a place that I’ve devoted myself to not just because of you, our loyal viewers, but because of all of the producers and the crew who work on this show. We have an incredible team. We are incredibly devoted to one another. We are family. Apologies have been made and the best thing to come out of all of this, you guys, is that our parent company has assured me that Live is a priority.” Ripa then announced, “I am thrilled for Michael. I’m thrilled for you. This is a tremendous opportunity and I couldn’t be and we couldn’t be prouder of you.”

Strahan then jumped in adding, “I’m so happy you’re back. And one thing I know about you is you love the show. You love the fans. You love this staff. I love you. And I’m so happy you’re here because you brought me here with [Michael] Gelman and this show has — it’s been transforming for me. And I know the show lives on.” The pair then got down to business with Ripa turning the topic to the news of Prince’s death which occurred while she was away.