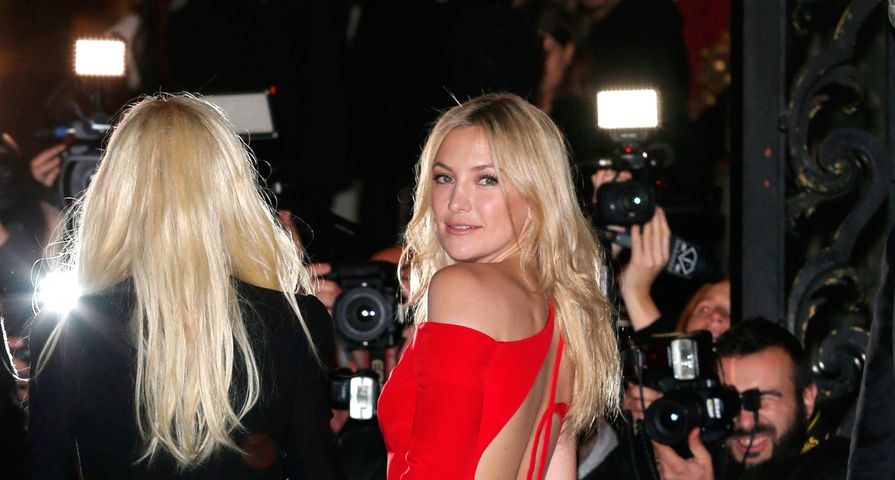 With all eyes on the SAG Awards red carpet on Sunday night one word that could be used again and again to describe some of Hollywood’s biggest stars was definitely sexy.

Jennifer Aniston, 45, left little to the imagination in a stunning body hugging and deep plunging gown and while she was turning heads in Los Angeles one of her best friends Kate Hudson, 35, was doing the same in Paris, France.

Aniston and Hudson had quite a moment together while on the red carpet at the 2015 Golden Globe Awards earlier in the month when Aniston grabbed Hudson’s butt, a photo that instantly went viral and Aniston later explained, “Well, my gosh, look at that ass. It’s such an irresistible tush.”

Hudson decided to once again make that “tush” a focal point when she was on hand at the Versace Spring/Summer show at Paris Fashion Week rocking a stunning red cut-out dress, given to her by designer Donatella Versace especially for the show.

Hudson posed alongside the famous designer with her own mother Goldie Hawn but definitely stole the spotlight in the dress with strategically placed cut outs showing off her abs, shoulders, back and just the top of her bottom.

As well, a very high slit revealed Hudson’s incredible toned legs made even better by nude Christian Louboutin heels. Matched with her perfectly tousled blonde hair it looks like Hudson is taking her split from ex-fiance Matt Bellamy very well.