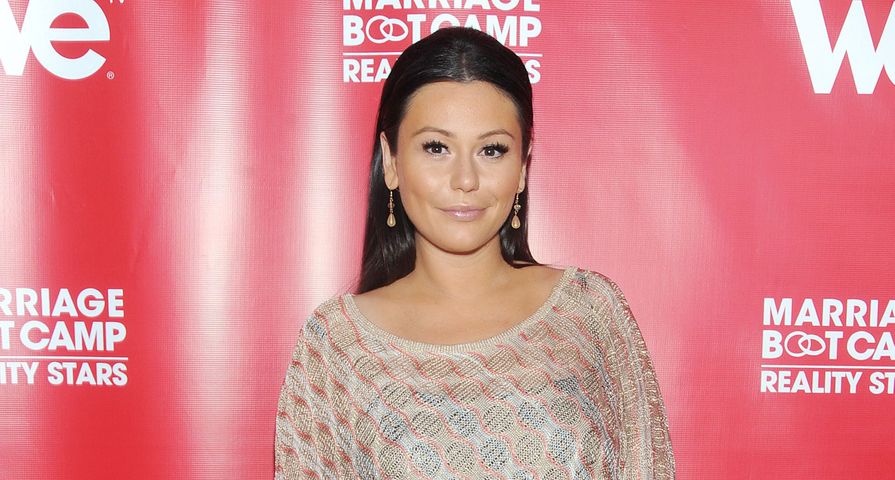 It seems former Jersey Shore star Jenni “Jwoww” Farley is preparing her baby daughter Meilani to be the next generation of Jersey Shore stars after posting a very controversial pic to her Instagram followers on January 23.

“So Roger [Mathews] and I are trying to figure out who Meilani looks more like, me or Roger? So Roger decided to give Meilani a baby beard, faux hawk, and a muscle-tee so she would look like him! But then we gave her some hair extensions, fake boobs and some hot pink sunglasses and she definitely looks more like me! LMAO! just kidding, we decided that our baby is the perfect combo of both mommy and daddy!!! What do you think!?,” she blogged along with the two “makeover” pictures side by side.

While JWoww and Roger obviously thought it was funny, many were quick to criticize the two for giving their baby daughter hair extensions and fake boobs claiming they had gone too far.

Jenni however took on the haters during an interview stating, “I love how everyone’s an internet bully – that’s the problem with society these days. Nobody will say it to your face. Keep hating as we enjoy our lives.” While best friend Snooki added, “Shake it off!”

Jenni also fought back on social media after InTouch Weekly did a story on the photo and posted it along with, “Do you think this star took it too far by giving her daughter fake boobs ‘like mommy’?” On her own Instagram Jenni wrote back, “Actually no I didn’t. It was a joke and in good fun so she can laugh when she’s older…Honestly shut the f–k up and mind Ur business. I would love b–ches to say this to my face.”

In fact although Meilani is only a few months old, Jenni has already said she has no problem if her daughter wants plastic surgery when she’s older.”I want my daughter to have self confidence. I want her to be secure. If she has a problem with her nose or her boob, or if there’s something she would really like to fix that would improve her confidence, why not?”

Check out the pic below:

We have to ask: