Tiger King‘s Jeff Lowe revealed to PEOPLE that he and his wife, Lauren Lowe, “are now signed for a reality TV show.”

Jeff shared that the reality show “will divulge a lot more information about the relationship between” himself and former zookeeper Joseph Maldonado-Passage, famously known as “Joe Exotic.”

“It’ll be our narrative on the Tiger King with evidence to support our sides of the stories. And it will be about the transfer of all these beautiful animals from Joe’s facility to the new facility,” said Jeff, who is set to open a new zoo — Tiger King Park — in Thackerville, Oklahoma, in September “And then the day-to-day struggle of running something as big as a 60-acre animal park and all the intricacies of the employment of zookeepers and fighting all of the animal rights groups.”

The reality star said the goal of the show is to prove to the world “that it can be done right.”

Lauren added: “Just showing the animals going from small enclosures to bigger enclosures. We just want to put a brighter light on things because everybody wants to put a horrible light on roadside zoos. Every zoo is off of a road.”

As for when the reality show will be released, Jeff said “We’re just going to have to find out.”

“They haven’t even given us an exact date of production. It’s in pre-production right now. It’s with a content group in California, and it will prove to be very, very informative,” he elaborated.

“We’re filming B-roll right now. It’s hard with COVID-19 to put crews together and get them all out here, staying in hotels. It’s just a little bit difficult, but I think they anticipate a few more weeks before they start all of the big camera filming,” Jeff added.

Right now, it is not clear which network will air the show.

The news of Lowe’s upcoming reality show comes just after Carole Baskin and her Big Cat Rescue corporation was granted control of The G.W. Exotic Animal Memorial Park – which was formerly run by Maldonado-Passage, but recently was under the control of Lowe.

A judge ranted Baskin control of the zoo property after finding it was fraudulently transferred to Maldonado-Passage’s mother years ago, according to court documents.

On Tuesday, June 2, Baskin told PEOPLE that Big Cat Rescue is prepared to help the animals of the zoo – however, Jeff said he doesn’t need Baskin’s assistance.

“If the need arises to make other plans to place the animals in new homes, Big Cat Rescue and the animal welfare organizations that have previously successfully placed big cats from large facilities in new homes stand ready to assist,” Baskin said.

Now, Jeff has 120 days to vacate the premises – including all of his animals that currently reside at the zoo, according to the ruling.

In a statement released on Tuesday, Jeff addressed the lawsuit – and confirmed that Baskin will not be taking any of the animals from the zoo.

“Although I am not personally named in the lawsuit, it appears that Carole Baskin and her desire to exact revenge against Joe Exotic trumps the livelihood of the families that came together to save her life. Without our efforts, it is well known that Carole would no longer be here. We anticipated Carole Baskin gaining title to the former park that once belonged to Joe Exotic many years ago. It is my understanding that she will also be taking the cages from the zoo, which thankfully means that the animals that she has will finally have the proper amount of space to move around,” he wrote about Baskin.

He went on to elaborate that the animals will be re-homed at the new Tiger King Park.

“Please don’t worry about our animals. As you saw on the Netflix documentary, I have been building the greatest Tiger Park the world has ever seen. Thanks to our loyal fans and customers, and the amazing people who work at the zoo, the new Tiger King Park is opening in Thackerville, Oklahoma this September, directly adjacent to the World’s Largest Casino, WinStar World Casino and Resort,” wrote Jeff.

“We look forward to seeing you at our new location in September. Please visit us at www.officialtigerking.com for more information. But in the meantime, we are still open for business! So, if you haven’t had a chance to visit the zoo and see our animals, this may be your last chance,” he concluded his statement. 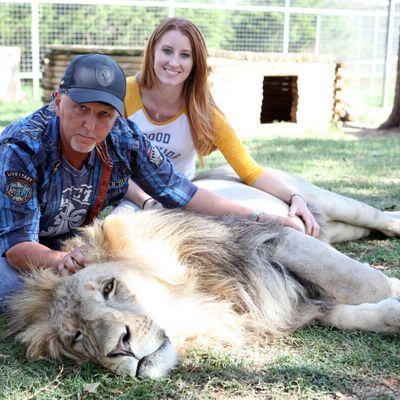