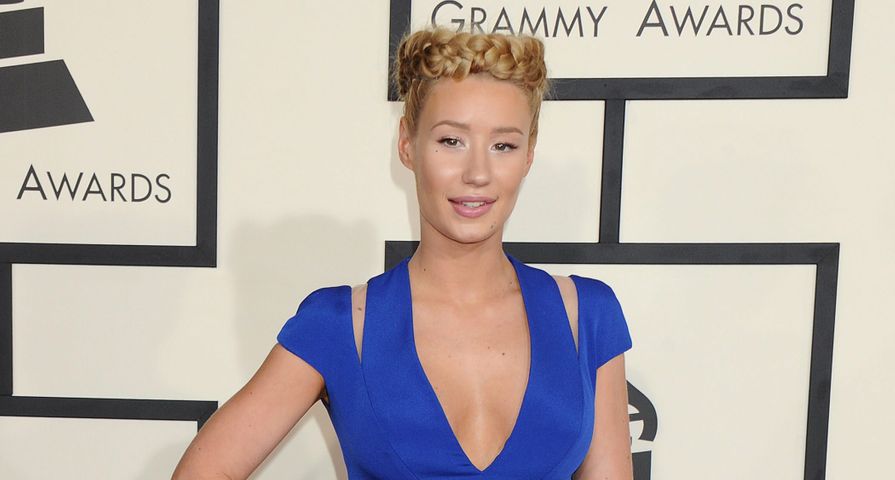 Australian rapper Iggy Azalea, 24, has always been open and down-to-earth, qualities that have made her partly sensitive to the harsh criticisms that she, like all celebrities, has received from the public and the press. Although she has temporarily “quit” social media after the latest round of comments, she still has no problem being welcoming and open in interviews.

In a segment for Vogue, the superstar took part in a 7-minute video where she bravely answered 73 rapid fire questions while also giving an impromptu tour of her gorgeous house.

In the interview Azalea, whose real name is Amethyst Amelia Kelly, answered everything from who she would love to collaborate with (Andre 3000!) to what made her fall for her L.A. Lakers boyfriend Nick “Swaggy P” Young, and while all of that was intriguing and fun, it was a bombshell she casually dropped during another piece for the magazine that shocked many.

When discussing her shape and dressing for her curvy and tall figure she was asked the question, “What would you change about your body?” and she nonchalantly replied, “I did change something: Four months ago, I got bigger boobs! I’d thought about it my entire life,” she revealed.

She went on to explain that she decided not to talk about because she didn’t want other girls to start criticizing their own bodies, “But then,” she said. “I decided I wasn’t into secret-keeping.”

Azalea also talked about how she has often struggled with being tall and having a skinny waist but also having a behind made famous with her J.Lo song and video “Booty.”

“When I first got to the States, people told me I should think about modeling. So I went to a few agencies, but once they measured my body, they didn’t like me anymore […] it’s about proportion. I have to have everything tailored because I have such a small waist. I’m a 2 or a 0 on the top, and a 6 on the bottom.”

Also Check Out: 7 Celebrities Who Looked Better After Plastic Surgery