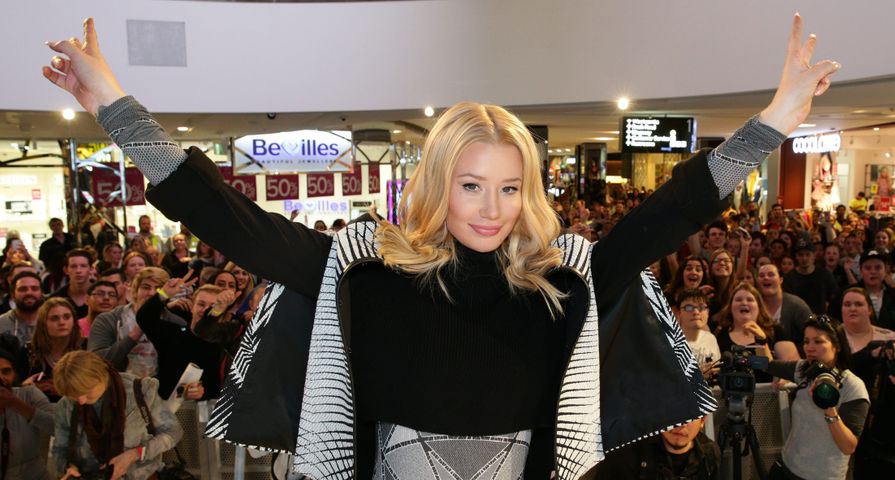 “This is the way the world ends: Not with a bang but a whimper.” Many thanks to T.S. Eliot for stating it so perfectly. And if only Iggy Azalea could flow like that master, she wouldn’t have to worry about popularity in order to keep making music. This girl did a number on herself in 2015, but if you look back, she was destined to be consumed by her own aimless ambition from day one. Here’s an education for young, aspiring artists — please pay close attention. Eight ways Iggy Azalea ruined her own career.

Iggy Azalea set herself up for failure by building a foundation on a feud. After Iggy came to the United States from Australia, she settled in Miami, looking to make a name for herself in the music industry. She was able to play some small-to-large clubs in the American South and had enough in her pockets at the time to leave some resonant sounds in audience ears. But then she took to Twitter, and started beefing with well-known names in the industry, most notably, Nicki Minaj. This such hubris suggests one thing: idiocy. To a certain extent, there’s no such thing as bad publicity, there is only publicity; however, it’s all in moderation. When you’re driving the press with negativity, you can only use it as shtick for so long before it will eventually consume you. People will get tired of your act quickly… unless you’re on a reality show.

After Iggy Azalea started making a name for herself, and signed with Grand Hustle — as well as a few other monster labels — she was thrust into the spotlight. She quickly became a caricature of contemporary rap and hip-hop, complete with the butt implants, a sexed-up look and the vapid look in her eyes. She was the new kid creating buzz and mystique, but everyone wanted to keep her at an arm’s distance. Every time she opened her mouth, she made unsavory statements about another artist attempting to traverse the same career mountain. You don’t climb Everest and push other mountaineers off the side of a cliff. She was idolized, catered to and thoroughly inflated by her camp, the media and her fan base… and it was more than a 22-23 year old could realistically handle. She lost it due to herself.

Along the way, Iggy Azalea has enjoyed some stellar mentoring from industry pros, like her label boss, T.I. Sadly, it seems as if the two of them aren’t necessarily picking up and laying down the same vibe. There’s not an artist in hip-hop who doesn’t see the profitability of a quick, faux-feud from time to time, but when your mentor tells you to cool it… you cool it. Iggy began to lay waste to her advice from T.I., leaving him to clean up her social media messes. If that confuses you… you get it. Her ignorance created a big ball of confusion. This is the reason T.I. announced that their relationship cooled dramatically over the past several months. One thing Iggy should have done from the get-go: talk/tweet less, and listen a helluva lot more.

This may be the root cause of all Iggy Azalea’s impropriety from the butt implants to the look to the attitude that frosted everyone she’s ever worked with. All her mistakes seem to be mistakes of youth and ignorance. Thinking you’re better than you actually are? Working with individuals, and then openly criticizing them in open, Internet forums? Only a child is foolish enough to bite the hand that feeds them. It’s the age-old, “I hate you, mom!” Mom puts the food on the table, doesn’t she? Sadly, Iggy was so insecure — another frequent youthful folly — that she allowed herself to be molded into something that was not focused on talent, rather what she could look and sound like. When you’re properly seasoned, you don’t let people pull that wool over your eyes. She was young and made some dumb mistakes, and is now facing the consequences.

We don’t need to spell it out, do we? People are sick and tired of the b**** shtick. The routine. The show. Nobody wants to root for the bad guy. It is easy to be entertained by the bad guy/gal for a short while, but ultimately, it’s not sustainable. Ironically, Iggy can look to Justin Bieber for a perfect example. When Justin proved to be contrite, disappeared from the public eye and made claims that he really only cared about making music, while making his fans happy, he was extended the long arm of grace. Iggy has a chip on her shoulder that nobody cares to break off, and obviously, nobody wants to look at. Similarly, people are getting tired of the Nicki Minaj shtick. All people beware: that stuff may be appealing, but it will eventually consume and isolate you.

Nicki Minaj has been mentioned a couple of times, and now we can focus on her influence. It seemed rather obvious that Iggy was cut to be the white Nicki Minaj. It was so obvious it almost seemed satirical. Iggy believes her flow, talent level, style and overall substance to be far superior to Nicki, but taking into account every fan of the music industry, Iggy has only ever been seen as an imitator. Either way, they’re both tired, and one had to go. Just like “new” Coke in the 1980s, people opted for the “Classic.” If only Iggy had rolled to the show as herself: no implants, no hypersex, nothing but being a lanky white girl from Australia who could rap. That… would have been novel. She wouldn’t have enjoyed immediate fame and celebrity, but she could have built a sustainable foundation.

Now we can strip all the character flaws down to the brass tacks of business. It is show business. Therefore, you need some show — a little razzle dazzle — if you want to conquer the beast known as fame. Sadly, there was no real foresight in developing this personality known as Iggy Azalea. She was cloaked in style, but severely lacked substance. It was all about the now, offering little thought to “What will I do once people know who I am? How will I continue to engage this audience?” Sadly, she kept doing the same thing. People want to see growth, change, progress… not more feuds, and fewer clothes. Iggy isn’t the only individual who has fallen victim to this dilemma. If she could do it all over again, she should be Amethyst Kelly, and simply show up and rap. Break new ground. Be an artist.

Digging deep to the root cause of Iggy’s downfall, it’s not hard to see her lust for fame — that obsession with all the things fame and celebrity can buy. If that is the desire of an individual who is parading as an artist…? Kudos! Hopefully they invest well from the get-go, then laugh all the way to the bank to collect residual income. That’s not the case for someone like Iggy Azalea. She wants praise, adoration, fans, live performances, hit music and legacy, but she’s obsessed with the only thing that doesn’t matter in all of it, the “Look at me!” factor. The celebrity. And while chasing that carrot on a string, the one thing she forgot to consider: how do I earn a lasting respect? At this point, everything she does is damage control. Time to step away for awhile and let the waves die down.