Hunter King And Michael Mealor Open Up About Y&R Return 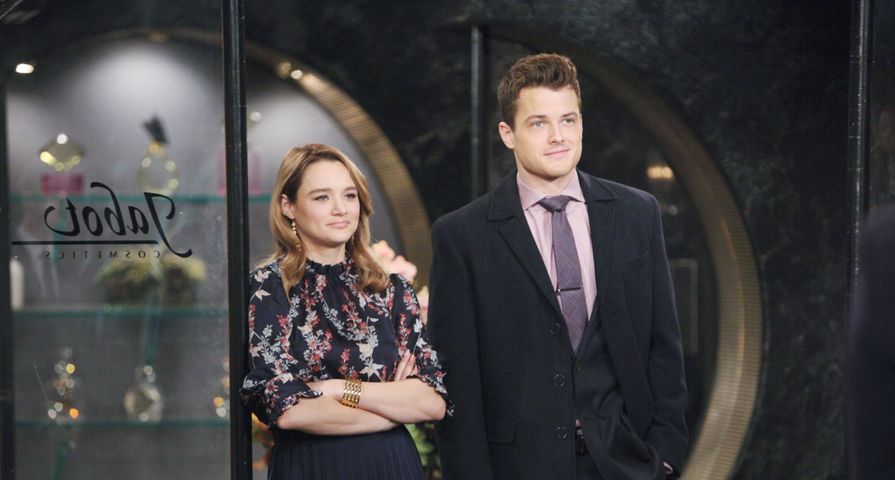 Michael Mealor and Hunter King have shared a lot of experiences, both on The Young and The Restless (Y&R) — as bonafide super couple Kyle Abbott and Summer Newman — and off-screen, where they endured a very intense round of contract negotiations at the same time.

While those contract talks ultimately failed, causing no shortage of Y&R fan outrage, these former cast members are sharing yet another career milestone as they make a special appearance on the CBS soap this week.

Interviewed by Soap Opera Digest about their much-publicized return, the soap stars unsurprisingly felt similarly about going back to their old jobs.

“It’s like going back to high school after summer break,” Mealor described the feeling.

“You’re excited to see everybody and all of the stress washes away for a little while,” King agreed. “You walk in and it’s nothing but fun and joy and happiness because it’s like coming home.”

“The days have gone by so slowly since I was last there but as soon as I stepped into that building, it felt like yesterday,” King added. “I have so many friends between the crew and the actors, so it felt so nice to be back.”

Mealor and King’s return will coincide with the wedding of Victoria Newman (Amelia Heinle) and Ashland Locke (Richard Burgi), an opulent occasion that brought new stress and excitement for the duo.

“I’m someone who doesn’t like to be in the spotlight,” Mealor shared. “So when we were called to set, pretty much everybody was already there because they had just shot scenes for the rehearsal dinner. So, we walked out there and everybody was like, ‘Yay!’ I was kind of meek and said, ‘Hi, everybody.’”

“I agree with Michael,” King jumped in. “I don’t love being the center of attention, so it was a little uneasy when everybody was like, ‘Hey! Look at those two!’ It kind of felt like when a crowd of people sing ‘Happy Birthday’ to you and you don’t know what to do with yourself.”

“But in 20 seconds, we were old news,” King laughed. “It was back to business as usual and it felt normal again.”

With that mild awkwardness out of the way, the larger cast presence allowed both actors to reconnect with some favorite co-stars.

“I love group scene days,” King said. “I know they’re long and exhausting for everyone involved, but I think they’re so much fun because you get to work with people who you usually don’t get to work with. I kept saying all day long that I was getting paid for just hanging out with my friends. It was a blast for me.”

“I really hoped that I would at least work with Jack [Peter Bergman] and Nick [Joshua Morrow],” Mealor admitted. “If I’m going to be there, I want to see everybody, so it was really fun that it was for a wedding. I don’t care what the story is, I’ll go back, but it’s more about the family that Y&R has created, so it’s a lot of fun to see everybody.”

Although Y&R viewers will get to see both Mealor and King back in action this week, as the Newman-Locke nuptials unfold, their future on the soap is unknown. So what’s next for these two?

“I went back to school,” King shared. “I’m taking an accelerated math class that’s only six weeks long, but next quarter, I’ll be taking a lot more classes. As of right now, my major will be psychology. And hopefully, I’ll be working that in with acting, but I’m in the pursuit of learning as much as I can and constantly growing as a person.”

The subject of psychology is near and dear to King, who has been a vocal supporter of mental health awareness over the years.

“Depression is something I’ve struggled with for years, so I’m passionate about finding ways to not only help myself but others in that way. That would be extremely rewarding for me,” King continued. “I also went to Europe for a while and I’m also auditioning but I feel like I’m at a weird crossroads in my life, of ‘What do I want to do next?’ I’m just taking it day by day, exploring what options are out there for me.”

Mealor, on the other hand, has been content to take things a bit slower. “I moved and have been hanging out with my dog,” he laughed. “I’m auditioning here and there, but only for things that mean something. Not that I have a bunch of money saved up and I can go on without having a job, but I’ve been acting for so long that I decided that whatever I do next, I want it to be fun. I don’t want it to be, ‘I need a job so I’ll just do this.’”

“Other than that, I’m discovering what my life looks like at this point,” Mealor continued. “I’m trying to find a routine because I had been working so much that I don’t know what my hobbies are anymore. So I’m actually enjoying the time off.”

As fans try to make peace with the fact that Summer and Kyle’s wedding occurred off-screen, the question will always arise: when can we expect to see Summer and Kyle back on Y&R?

“Of course I would love to come back,” King confirmed. “I miss playing Summer. Y&R will always have a huge place in my heart. I’m not sure exactly what the future holds and how often I’ll be back, and how often they want me to come back, but I’m always open to coming back.”

“I love the show and the fans so much,” she enthused. “I feel so grateful to have the opportunity to play Summer, so we’ll see what happens.”

“I love everything Y&R and it’s just so much fun to go and act with these people again,” Mealor chimed in. “So of course I’ll aways be back when they call.”