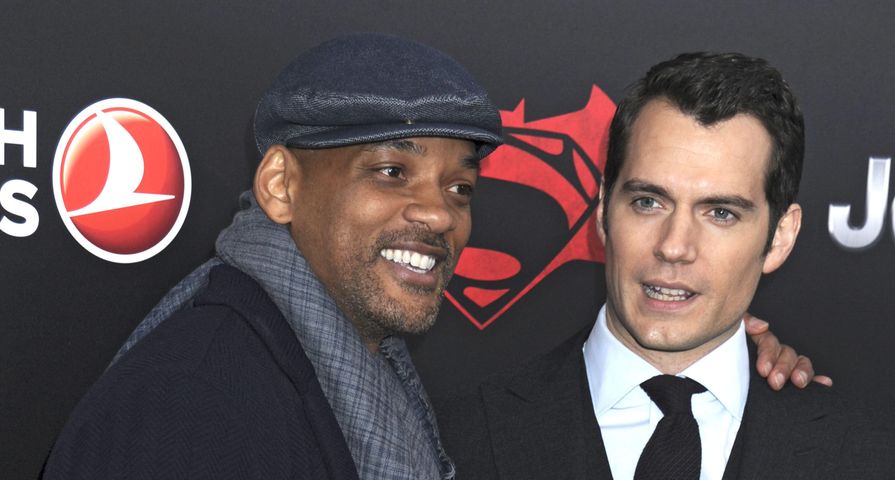 Henry Cavill was quite the joker this weekend! On Saturday, the handsome Superman actor attended the 2016 San Diego Comic-Con, where he surprised Will Smith with a little visit.

Smith was promoting Dan Ayer’s new film, Suicide Squad, where he plays Deadshot, and was signing autographs at the event. Cavill thought it would be funny to prank Smith by pretending to be a fan. In a video he shared on Instagram, Cavill told viewers, “Here we go. Gonna head onto the floor and see if I can get away with it. Wish me luck.”

Cavill wore a Guy Fawkes mask from the film V for Vendetta, and roamed the convention to visit booths and get pictures with fans. Covering his face with the mask, the actor approached the Suicide Squad panel to get an autograph and a picture with Smith. As the two of them posed for the photo, Cavill removed his mask. It took Smith a few seconds to realize that the fan was Cavill, but once he did, he let out his signature laugh.

Cavill was pleased that his prank went off without a hitch. “Best Comic Con yet,” he wrote on social media. “I got to be here for Justice League but couldn’t miss Suicide Squad. #SDCC2016 #JusticeLeague #SuicideSquad.” Carvill was at the event to promote Justice League, which screened its first trailer this weekend.

Suicide Squad is set to release in theaters on August 5. In addition to Smith, the film stars Jared Leto as the Joker, Margot Robbie as Harley Quinn, Cara Delevingne as June Moone / Enchantress, and Ben Affleck as Batman.

Best Comic Con yet. I got to be here for Justice League but couldn’t miss Suicide Squad. #SDCC2016 #JusticeLeague #SuicideSquad