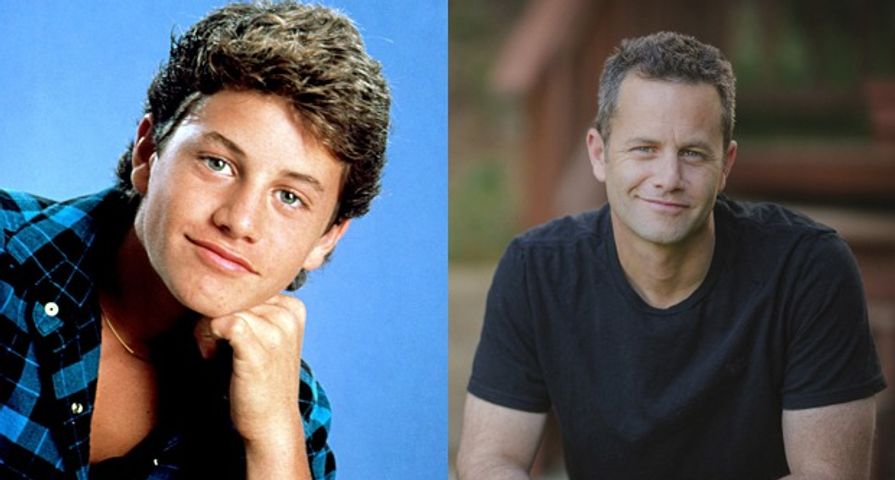 Most remember Kirk Cameron as a young star on Growing Pains, but today the actor turns 48!

Cameron began acting back in the early ’80s with small roles on several series and TV movies before he landed the role of Mike Seaver on the beloved sitcom Growing Pains which ran for seven seasons from 1985 to 1992 when he was only 15 years old.

In the years since the show came to an end, Cameron has continued acting with many roles in both TV and film including in Like Father Like Son, Listen to Me, Left Behind and Fireproof, but has since mostly left mainstream television to focus on his Christian-based work. While he was an atheist as a teen, Cameron became a born-again Christian at 17 during the peak of his career on Growing Pains.

On July 21, 1991 Cameron married his Growing Pains costar Chelsea Noble and together the pair have adopted four children: Jack, Isabella, Anna, and Luke and have welcomed two biologically: Olivia and James.

In honor of Kirk Cameron’s 48th birthday, check out where some more of the most popular ’80s heartthrobs are now!

15 Forgotten ’80s Heartthrobs: Where Are They Now?

Emilio Estevez got his big break in the ‘80s with his role in Tex and he continued his success with a role in The Outsiders, a film adaptation of an S.E. Hinton book, which became a cult classic, putting nearly every major actor, including Matt Dillon, Patrick Swayze and Tom Cruise, on the Hollywood map. Throughout the ‘80s, he was part of the Brat Pack, a group of young actors that included Rob Lowe, Demi Moore, Judd Nelson and Andrew McCarthy, but by the early 2000s, he began spending more time behind the camera. He’s directed episodes of Cold Case, CSI: NY, Criminal Minds and Numb3rs.

Arnold Schwarzenegger made a name for himself in action movies like Conan the Barbarian and The Terminator. After becoming governor of California in 2003 and leaving office in 2011, he has revived his acting career. Fans can expect to see him The Expendables 4 in 2018.

Judge Reinhold was a pretty big deal in the ‘80s. He had roles in Fast Times at Ridgemont High, Gremlins and the Beverly Hills Cop movies. Most recently, he was in My Many Sons, a film about NCAA coach Don Meyer. He even shaved his head for the role!

Judd Nelson’s role as bad boy John Bender in The Breakfast Club made him a star. Although he isn’t the movie star that he was in the ‘80s, he continues to act in film and on television. This year, he will be in the movie Billionaire Boys Club and he has a recurring role in the television series, Empire.

Sylvester Stallone became a bona fide heartthrob (and action star) thanks to his roles in the Rocky movies. In recent years, he’s experienced a career resurgence because of his roles in a series of action films, including The Expendables franchise and Creed.

Kurt Russell made a real name for himself as an actor (and hottie) in the ‘80s with his roles in Escape from New York, The Thing and Silkwood. He’s still happily committed to Goldie Hawn and this year fans can find him in The Fate of the Furious and Guardians of the Galaxy Vol. 2.

Eighties heartthrob Jean Claude Van Damme rose to fame courtesy of his roles in Bloodsport and Kickboxer. Although he experienced some personal and professional struggles beginning in the 1990s, these days his career is back on track. This year, he can be seen in Kickboxer: Retaliation.

John Cusack became a heartthrob in the ‘80s thanks to his roles in films like Better Off Dead, The Sure Thing, One Crazy Summer, Sixteen Candles and Say Anything. Although his film career has been unconventional, he has been successful. In 2014 alone, he had six films come out – The Bag Man, Maps to the Stars, Drive Hard, The Prince, Love and Mercy and Reclaim. In 2016, we can expect to see him in Arsenal.

Michael J. Fox stole hearts with his roles in Back to the Future, Teen Wolf and Family Ties. Although he semi-retired from acting in 2000 when his symptoms of Parkinson’s Disease worsened, he has continued to do voice-over work and he had a recurring role on The Good Wife, for which he has earned three consecutive Emmy nominations.

Kirk Cameron was a total heartthrob in the ‘80s because of his role on Growing Pains. Girls couldn’t get enough of him. Fast forward 30 years and things have really changed. Since he’s become a born again Christian, he won’t kiss another women on-screen and he’s mostly worked in Christian-themed productions, like Saving Christmas, which was panned by critics.

Scott Baio stole women’s hearts in the ‘70s and ‘80s as a result of his roles on Happy Days and Charles in Charge. In the 2000s, he guest starred on Arrested Development and had his own VH1 reality TV shows, Scott Baio Is 45…and Single and Scott Baio Is 46…and Pregnant.

Matthew Broderick was a total cutie in Ferris Bueller’s Day Off, with his boyish good looks and his carefree attitude. Although he isn’t quite as cute as he used to be, he’s still working in the entertainment business. In 2017, expect to see him in The Gettysburg Address and Look Away.

Val Kilmer made a name for himself in the ‘80s thanks to his roles in movies like Willow and Top Gun. These days, he looks like a shadow of his former self, as he has put on a lot of weight since his heyday. While he continues to act and has been seen in movies like The Traveler and Twixt, his career is nowhere near where it was even a decade ago.

Popular TV Shows That Were Plagued By Feuding Co-Stars

For some people, this may be hard to believe but, back in the ‘80s, Mickey Rourke was a real hottie. Anyone who has seen 9 ½ Weeks can attest to that! In 2015, he had three films come out – Ashby, War Pigs and Blunt Force Trauma.

Back in the ‘80s, Alec Baldwin was quite the heartthrob. With those blue eyes and that gorgeous facial structure, women everywhere swooned. To this day, he still has a pretty hot career. This year, he’s had four movies come out –The Boss Baby, Downsizing, Drunk Parents and The Private Life of a Modern Woman. Not bad!