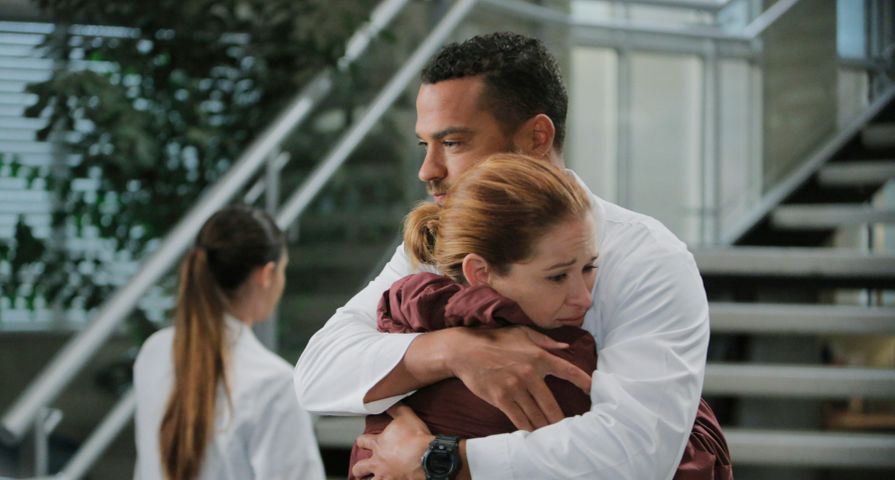 Many people have had a lot to say since news broke that two longtime Grey’s Anatomy stars, Sarah Drew and Jessica Capshaw, would not have their contracts renewed at the end of season 14.

While both Drew, who played April Kepner for nine season, and Capshaw, who played Arizona Robbins for 10 seasons, released brief statements on social media after finding out they had been let go, many of the Grey’s cast and crew have also posted messages about the news.

Jesse Williams, who plays Jackson Avery, took to his Twitter to share, “Sarah and Jessica are easily among my very favorite people and coworkers, so this news f–kin sucks. Their immense talent speaks for itself but it’s them as people that I’m so grateful to know, privileged to have worked with and learned from.” He added, “To say they’ll be missed is a massive understatement. Luckily for all of us, we’ll get to see these artists continue bringing compelling and complex characters to life for many moons to come! #OurWorkIsForever”

Shonda Rhimes also released a statement after the news (and outrage) broke. “It’s always hard for me to say goodbye to any of my characters,” Rhimes said. “Both Arizona Robbins and April Kepner are not only beloved but iconic — both the LBGTQ and devout Christian communities are underrepresented on TV. I will be forever grateful to both Jessica and Sarah for bringing these characters to life with such vibrant performance and for inspiring women around the globe. They will always be a part of our Shondaland family.”

Meanwhile drama was brewing for Meredith Grey herself, Ellen Pompeo, after she believed that the Deadline article about the news suggested that Drew and Capshaw had been let go due to Pompeo’s major raise which she recently opened up about. “Its unfortunate that @DEADLINE chooses to try to pit women against each other on #InternationalWomensDay #shameonyounotme,” she tweeted. “I’m a big girl @DEADLINE can take shots at me if they want but to the fans please don’t fall into that trap. This is above my pay grade.”

Meanwhile Grey’s co-showrunner Krista Vernoff also responded to the Deadline article, writing, “The suggestion in the Deadline article that our cast changes are in any way related to Ellen Pompeo‘s salary renegotiation is wrong and hurtful and misguided. It smacks of an old, broken, patriarchal notion that women must be pitted against each other and that one woman’s success will be costly to others. Ellen Pompeo has not only advocated passionately for her fellow cast members, she has taken the time to educate women worldwide as to how to advocate for themselves and that must not now be twisted.” She continued, “The decision to make changes to our cast was a creative one. The only thing constant on Grey’s Anatomy as Ellen Pompeo is our penchant for reinvention. It is a part of our success and what keeps the show exciting. We love these actresses and we love these characters and it felt true and right creatively to wrap up their stories. And that is the whole story.”

Deadline then updated their article, writing, “While Deadline’s story stressed that the decision for Capshaw and Drew’s exits was strictly creative, the mention of the big new deal for Pompeo, which helped secure a renewal for Grey’s, led to online speculation about a possible connection between the two. There is no such connection that we are aware of. Because this has become an issue, pitting women against each other on International Women’s Day, we are making it clear,” the article added while then sharing Vernoff’s statement.