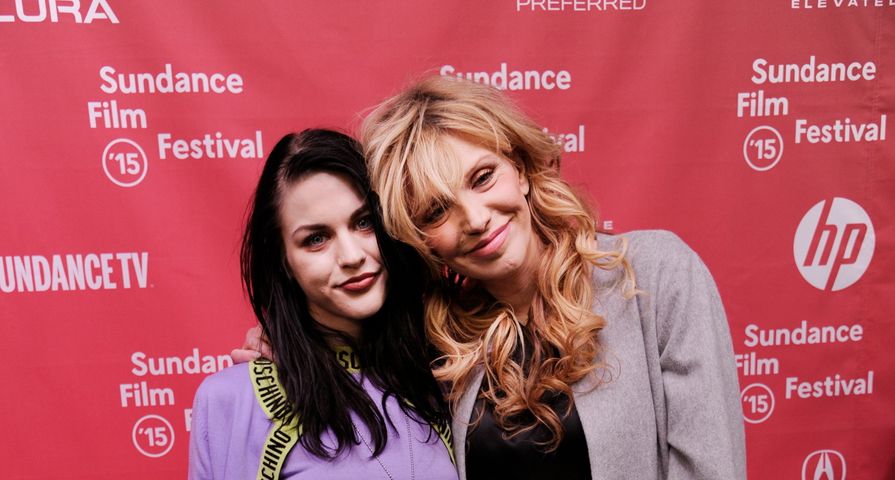 Frances Bean Cobain, 22, was only two years old when her father, legendary Nirvana frontman Kurt Cobain committed suicide but, despite not knowing him, she appears to be a lot like her famous father.

Not one to be pulled in to the Hollywood spotlight, Frances is rarely seen but she did step out on Saturday January 24 to attend the première of the first fully authorized documentary of Kurt’s life, Kurt Cobain: Montage of Heck at the Sundance Film Festival in Park City, Utah.

Frances donned a purple and yellow Moschino crop top and skirt that exposed her “K” tattoo in honor of her father on her stomach.

Also at the première was her mother, Courtney Love, who Francis has had a tumultuous relationship with since childhood, often being taken out of her mother’s care and placed with other family members although the two were happy to hug and pose together on the red carpet.

The documentary was eight years in the making for Brett Morgan who acted as writer, producer and director while Frances signed on as executive producer, “I just wanted to give Frances a few more hours with her dad,” Morgan said during his introduction to the film.

As well as Kurt’s daughter and ex-wife, his mother, sister and long time friend and bandmate Krist Novoselic attended the première.

Also Check Out: 10 Stars Who Are Estranged From Their Parents