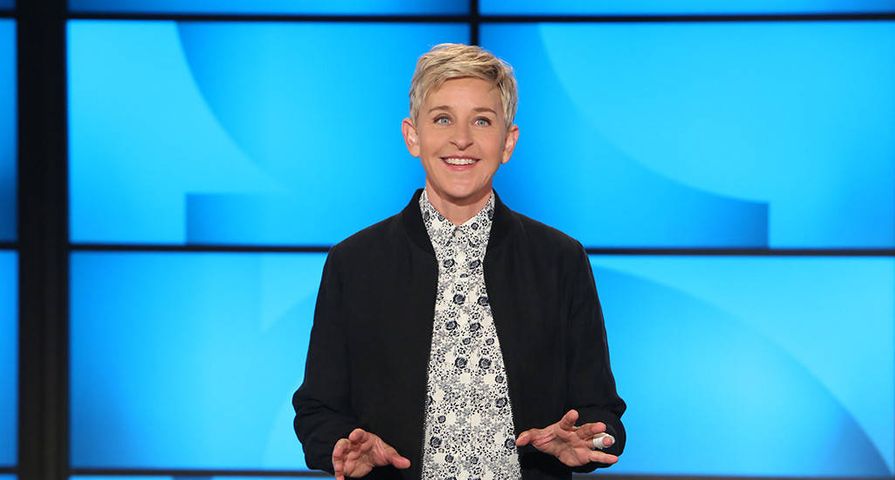 Oh, Ellen! The beloved talk show host revealed on her show on Tuesday, March 21 that she recently had to make an emergency trip to the hospital after injuring her finger in a wine-related incident.

“I have something to show you — it’s that right here. Can you see it?” she said to the camera showing off a splint on her finger. “I broke my finger. I know what you’re thinking: ‘How can you host a show without the tip of my ring finger?’ I am not gonna let this beat me. I am not,” she joked.

DeGeneres went on to explain the whole incident, stating, “So, you know how in gymnastics when you do a one-handed cartwheel and you have to spread the weight evenly between all your fingers? Well, I had two glasses of win and fell into a door.”

She and her wife were coming home from a dinner party and were almost to the door when the accident happened. “The dogs were so excited to see us and I caught the lip of the top step. I was a foot away from the door and I fell into the door and it did something to my finger, I knew something was wrong.” She then failed to warn her audience before showing a photo of the dislocated finger. “I should have warned you. Don’t look at that. If you’re squeamish, don’t look at it. I’m sorry,” she said.

“My first thought was, ‘No big deal; Obama Care will cover this.’ So, Portia drove me to the hospital—to the emergency room—and when I got there, of course, the receptionist had so many things for me to sign: a picture for her nephew, a T-shirt for her,” DeGeneres joked. “No, they were wonderful. UCLA, thank you so much…There was a lot of people who were helpful, but Tammy, thank you so much. Tammy was my nurse who was taking care of me.” DeGeneres then showed an X-ray of her finger. “Don’t worry—this isn’t as bad as the last one I showed you,” she said. On second thought, she said, “Maybe it is. I was wrong. It’s worse. I’m so sorry.”

The beloved host then explained how they fixed the dislocation. “So, do you know what they do when you dislocate your finger? It’s very technical. What they do is they take the part that’s dislocated and then they just snap it right back into place. Yeah, you can see why they have to go to eight years of medical school. Before they did it, I was in incredible pain and Tammy said, ‘Do you want a shot?’ And I said, ‘No, I had two glasses of wine—that’s what got me into this mess in the first place, Tammy.’ She meant a shot to numb my finger. She said, ‘You’re gonna feel a little prick.’ This is a daytime show—you make up your own joke there.”

Luckily DeGeneres was okay and even stopped to take a selfie with some patients including one young man who explained he got hit by a bus. “He won,” DeGeneres told Stephen “tWitch” Boss. “He won the story.”