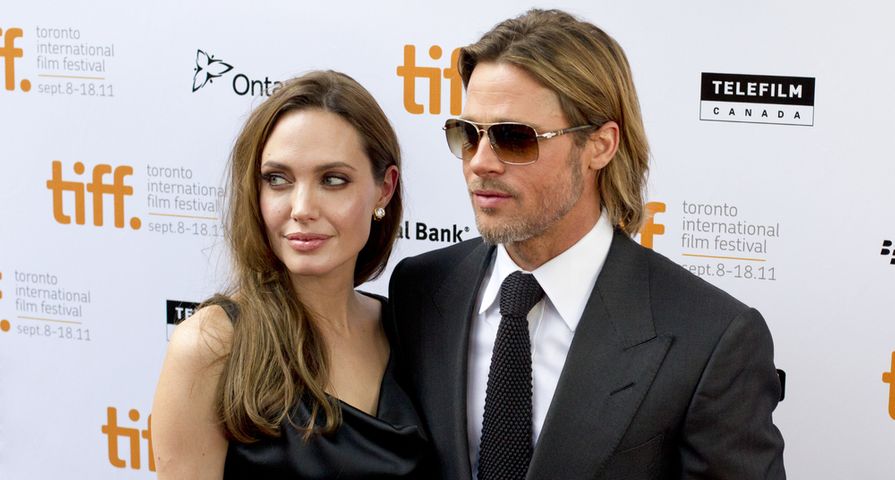 You can never say it too many times. It’s so appropriate they call it Hollyweird. Brad Pitt can attest–it’s one of the reasons he and the family now call New Orleans home. Still, Brad got a wonderful reminder of the odd balls who leech upon celebrity when they roll out the red carpet on Hollywood Blvd.

Brad was attacked by serial red carpet prankster, Vitalii Sediuk, not to be confused with prankster, Vitaly Zdorovetskiy, a different prankster who calls Ukraine home. This is the same Vitalii Sediuk who kissed Will Smith while posing as a reporter, and who has given his face-to-crotch hugs on red carpets. His list of “crotch hug victims” include Leonardo DiCaprio and Bradley Cooper. And now, it would seem… Brad Pitt.

It was a gorgeous evening in Los Angeles. The kind you hope for at a premiere for the sake of comfort: early evening sun, perfect temperature, all that good stuff. Unfortunately, when the elements are so enjoyable, the super crazies come out to play. If you’ve never seen the madness surrounding a Hollywood premier, it’s something that everyone should experience.

As Brad and Angelina were walking the red carpet, answering a few questions and signing autographs, Vitalii saw an opportunity, and he jumped on it. Well, he jumped on Brad. Right on him. Surely, there is photographic evidence that we’re waiting to see, but as it has been reported, Vitalii jumped on Brad and wrestled around on him. This sounds like another crotch hugging incident.

To see the aftermath, as well as Vitalii in cuffs waiting on the LAPD paddy wagon, check out the video below.

Also Check Out: 10 Things You Didn’t Know About Brad Pitt!