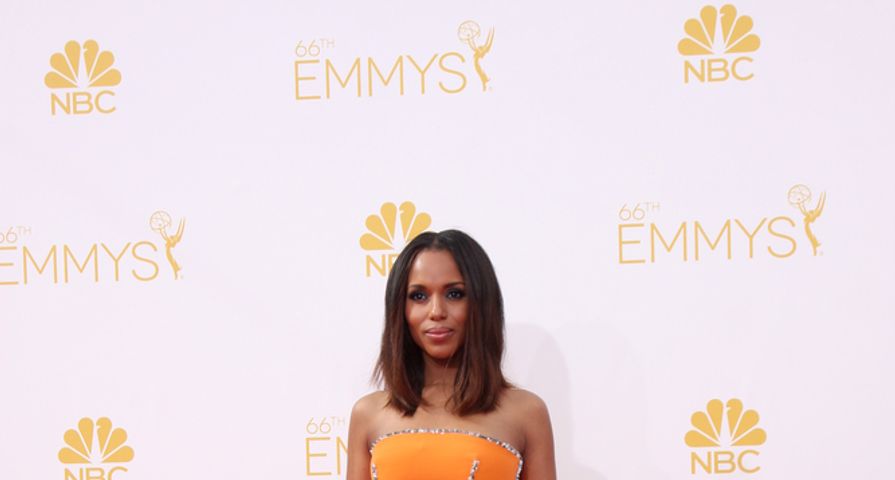 Kerry Washington is easily one of the most fashionable actresses on the red carpet today. We’ve watched her evolve from a struggling movie actress, who made some pretty questionable style choices, to a television actress with one of the most sophisticated fashion senses in the business. For years now she has been rocking the red carpet like it is nobody’s business. She wears some of the most eye-catching designs and she does with it such grace and elegance. Because she has become such a fashion icon, join us as we take a look at Kerry Washington’s fashion evolution!

A young Kerry Washington looked really cute in this strapless, green cocktail dress that she wore to the premiere of “Against the Ropes.” The dress isn’t nearly as sophisticated as what she wears on the red carpet these days, but for 2004 it looks somewhat stylish. Sadly for Washington, the film ended up being a flop. It totally bombed at the box office and critics mostly gave it negative reviews. Luckily, she only had a supporting role in the film.

The struggling actress wore a rather interesting looking dress to the 9th Annual Hollywood Awards Gala. There are definitely some things that we really like about this ensemble. The dress itself would look amazing if she didn’t have that flower ornament hanging off the waist. The shoes aren’t especially good either. A simple pair of black pumps would have looked better. Kerry Washington is obviously fashion-oriented, but she still has a long way to go before she becomes the fashion icon that she is today.

Kerry Washington wore an unfortunate-looking black and white dress to the premiere of “The Dead Girl.” She clearly likes to take risks on the red carpet, and we praise her for that; however, this dress is all wrong. The material looks cheap and the design wasn’t well executed. The black and white patterns and the way the back hangs so low make it a complete mess. While it hugs her body nicely, we think that, overall, the dress is a red carpet fail.

The up-and-coming actress looked great in this cream and burgundy Prada dress with a black belt, a black Prada clutch and a simple pair of black heels. Kerry Washington’s career hadn’t really taken off at this point, though. While she had a number of roles in some big films, including “Save the Last Dance,” “Mr. and Mrs. Smith” and “Fantastic Four,” she still wasn’t a well-known actress. It would take the hit television drama “Scandal” to put her on the map.

Kerry Washington looked absolutely stunning at the premiere of “Synecdoche, New York.” She wore this stunning black Oscar de la Renta Fall 2008 gown with gold embroidery, which landed her on many best-dressed lists. Washington wasn’t even in the movie, but we’re pretty certain that she looked way more fashionable on that red carpet than any of the actresses who were in the film. We see a fashionable future for this rising star!

The soon-to-be television star rocked the red carpet at amfAR’s Cinema Against AIDS Gala in this strapless deco beaded Marchesa gown. The designs on the dress are exquisite, as is the overall fit of the dress. Washington is really proving to be quite savvy when it comes to fashion. She may not score a lot of leading roles, but she works the red carpet better than most – if not all – of her contemporaries. That is a skill in itself!

Kerry Washington looked beautiful in this white Giambattista Valli dress. She accessorized with a Bottega Veneta clutch and a Miriam Salat quilted cuff, a star-studded bangle and a pair of black Casadei pumps at Variety’s 2nd Annual Power of Women Luncheon. Washington seems to become more fashionable with every red carpet she graces. This dress looks so nice on her. All of the details are lovely. We are excited to see what she wears next!

The rising star outdid herself at the 2011 ESPY Awards. She looked uber chic in this shimmering high neck Jenny Packham mini dress with a matching belt, Gio Diev shoes and H. Stern jewelry. Kerry Washington never gets it wrong on the red carpet anymore. We would be hard pressed to find anyone who doesn’t think she is one of the most fashionable stars in Hollywood. At this point, all she needed was a real career break. Thankfully that was coming!

Kerry Washington turned heads at the Hollywood Film Awards Gala 2012 in this black and white Monique Lhuiller Spring 2012 dress with Borgioni earrings, a Louis Vuitton clutch and black satin pumps. 2012 was a really great year for the actress. She landed a role on “Scandal,” which earned her an Emmy nomination, and she also secured a part in Quentin Tarantino’s Academy Award-nominated film “Django Unchained.”

The “Scandal” star was one of the best-dressed celebrities at the Film Independent Spirit Awards. She donned this floral-print Giambattista Valli Fall 2012 Couture dress with floral print Christian Louboutin ‘Sissi’ pumps and a blush colored Bottega Veneta clutch. We love this entire outfit on her. If more stars could dress like her on the red carpet, there would be no need for any more worst-dressed lists.

Kerry Washington dazzled on the red carpet at the 2014 Primetime Emmy Awards in this orange, strapless column Prada gown with blue, green and clear edges and an underlying navy mini skirt embroidered with crystals and paillettes. She accessorized with a Prada clutch, Prada pumps and Fred Leighton jewelry. Kerry seems to have it all – a happy family, a thriving career and some of the best fashion sense in the business.