Home » Entertainment » TV » Young And The Restless’ 7 Most Ridiculous Deaths

Young And The Restless’ 7 Most Ridiculous Deaths 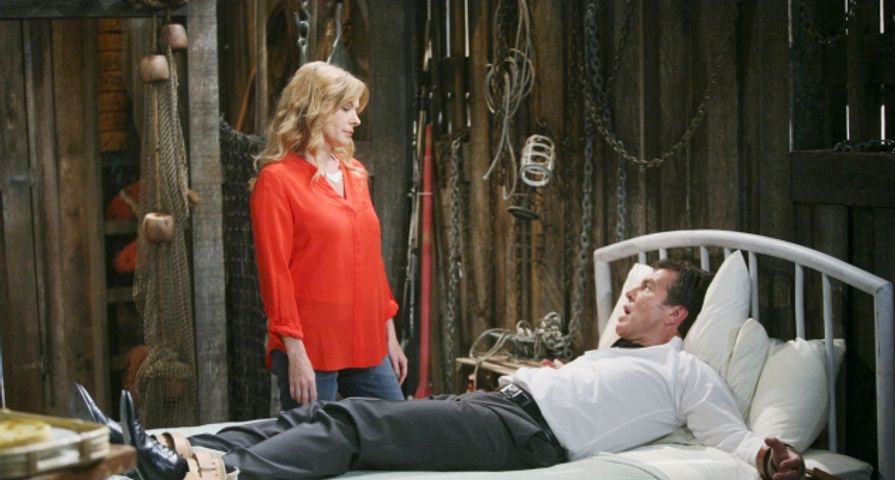 Soap fans love a good piece of drama … why else would anyone tune in daily and weekly, right? For many viewers that hour (or hours) in the afternoon can be a guilty pleasure. Sure, things can seem over the top at times, but that is the entertainment of it all. When it comes to soap opera storylines, things can get a little out of hand and down-right ridiculous! Alas, sometimes soap opera deaths (and the situations round them) can be the most outrageous of all. Below is a list of seven Young and the Restless’ (Y&R) most ridiculous deaths.

7. Skye And The Volcano

Despite her shorter tenure on the show, Skye Lockhart sure died and came back to life a lot. Adam Newman helped her frame her own death in 2008 and then his dad Victor did the same in 2010. But who knew her real demise would be at the hands of a … volcano? Later in 2010, while Sharon was desperately trying to find Skye to prove she wasn’t dead and Adam hadn’t killed her, she found Lockhart near a volcano. While Skye was trying to take the camera that had evidence on it that she was still alive, she slipped and fell into the smoldering lava pit. Seriously folks, do they not barricade these things in Hawaii?

If we rewind time we’ll find a death that occurred over 40 years ago in Genoa City in 1975. A young (and poor manicurist) Jill Abbott was able to swoon handsome, rich, and distinguished Phillip Chancellor away from Katherine Chancellor while the two were married. Phillip wanted to divorce Katherine, marry Jill and live their happily ever after. Katherine did not want that to happen. On the way back from picking him up at the airport, Katherine tried to convince good old Phil to reconcile, but he rejects her. Mad, she swerves the car and drives over a cliff (very dramatic, yet very A-typical … soaps just love when characters drive over cliffs to their looming death). Ironically, she survived and Phillip didn’t, thus the Katherine/Jill rivalry was official born.

5. Death By Taser And Explosion

Speaking of cliffs and deaths, Adam Newman is another character that seems to have nine lives and some pretty ridiculous deaths as a result. He too flew off a cliff at one point and was presumed dead, but his latest death was just outrageous. While staying in a cabin escaping his latest legal woes and pending imprisonment, Chloe of all people was able to track him down. Little Miss Five-Foot-Nothing was able to not only find her way to Adam, but she shot him with a Taser dart to watch him die. Alas, thankfully she escaped before the cabin exploded (not sure how), but Adam was left there struggling and then (presumably) passed away in the burning inferno. Or did he? Should Adam ever return, this latest rise from the dead may be a harder explanation than all the others combined.

The ‘who dunnit’ storylines involving Diane Jenkins sent shock waves throughout Genoa City and Y&R audiences. She had a lot of enemies, and when she was found face down in a Genoa City creek, it was a bit creepy that any of the suspects would murder her in such a fashion, despite the fact that she was the town villainous. It ended up being Nikki Newman who was the culprit, and she was too drunk to remember she killed the woman in self-defense. Makes sense, but here’s the ridiculous part: Nikki can barely walk, talk, or do anything remotely functional when she’s drunk … how the heck did she muster up enough strength to kill Diane with a rock?

Another crazy ‘who dunnit’ storyline had to be the one involving Austin Travers and Courtney Matthews. When Abby, Summer, Noah, Courtney, Fen, Kevin, Mariah, and Austin all gathered at the Abbott cabin for a Valentine’s Day party, no one would have imagined it would end up with someone dead. Austin was found the next morning with blood on him and stuffed in the armoire. As the storyline continued, the same fate would be bestowed on Courtney. Turned out it was one of Genoa City’s finest, Detective Harding and his weapon of choice was a … fire poker? Not a gun, a knife, or death by strangling … but a fire poker? Seems like a ridiculous item to reach for when trying to kill someone. You’d think a cop who has seen it all could’ve done something a bit bolder with less incriminating evidence.

Especially when you’ve kidnapped him, tied him to a bed, refused to feed him, and drugged him. He may just turn on you! That was exactly the case for poor Kelly Andrews in 2014, who completely lost her marbles when Jack Abbott ended up leaving her and going back to Phyllis. With the help of the Victor, she kidnapped Jack, took him to St. Barts and tortured him. He tried to escape, but had no luck. She withheld food from him and even drugged him at one point. In the end, after spending the night with her, Jack woke up confused and next to a dead Kelly. Thankfully he was able to escape and head back to Genoa City, but the ridiculousness of the situation and Kelly’s death was just one piece of the outrageous Marco Annicelli storyline that year.

1. Who Died? Marge Or Katherine?

Odd as it may sound, Katherine Chancellor had a doppelganger that sprung up in the 1980s. Ironically, Marge Catrooke, a hard-nosed and crass waitress also happened to look exactly like Katherine (although no blood relation), and lived miles down from Genoa City. As luck would have it, in 2008 Kay wanted to help Marge with her drinking problem, but as they drove up to a rehab facility, they got into an accident. Marge died upon impact and Katherine flew from the vehicle. Everyone naturally assumed that it was Katherine that died … because, you know, it was her car and who would even think to run any tests and such. No one confirms death anymore, even if a millionaire is involved, right? Even more ridiculous than Marge dying and everyone thinking it was Katherine was the fact that despite lying in the middle of nowhere for perhaps hours, if not days, Marge’s friend Murphy was able to find Katherine and help her recover from the accident with little issues.