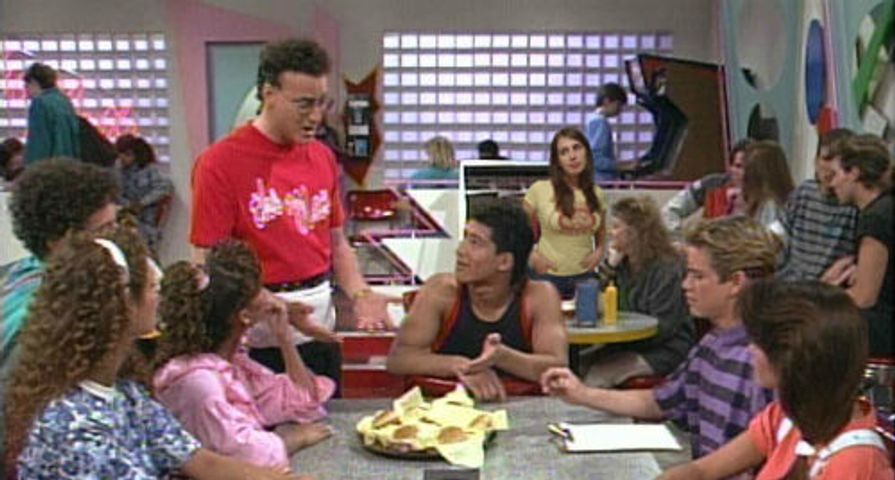 Fans of sitcoms notice similarities in a lot of things about the shows including characters, plot and developments; however, there is one more common thing that often gets overlooked in its importance to the show. Almost every show has a central location where the various characters all come together to hang out, making this spot very critical to the action and development of many of the episodes and series as a whole. As we are lounging on our couch watching these amazing shows from the ’90s and 2000s, we probably all thought we wish we had a place as cool as The Max or Central Perk to always convene with our friends. As much as we miss these shows, we miss these places just as much, so take a trip down memory lane back to the best fictional TV hangout spots of shows past.

If we’re being totally honest, the Cohen’s house would probably be the best place ever to hang out; come on, the pool house alone is amazing; however, the kids on The O.C. had a couple central locations they frequented and The Bait Shop was the best. Not only was it a pretty cool club, it was a pretty cool club on the beach which instantly makes it better. Not only did The Bait Shop have some awesome live acts, it also introduced us to Olivia Wilde as the gorgeous female bartender Alex who Seth (and Marissa) end up getting involved with. The Bait Shop isn’t introduced until season 2 but is prominent throughout the season including in Episode 27 where a drug deal goes bad and a shooting occurs. Apart from The Bait Shop, the Harbor School kids spend a significant amount of time lounging in the private school’s superior cafeteria/lounge and of course there is always The Crab Shack where Ryan gets a job with Paul Wesley who went on to Vampire Diaries fame.

Through all of the drama in Gilmore Girls, we could always depend on Luke’s Diner to be a constant source of stability. Lorelei and Rory visit Luke’s Diner quite often which means it is the place where a lot of the drama gets talked out and decisions are made such as when Lorlei asks Luke to marry her. Luke’s Diner was very realistic to the average small town cafe which only made it better, plus Luke owned it and his ever-changing moods had a lot to do with the quality of service and food which was either humorous or added to the drama, but either way it was awesome.

Charmed is possibly one of the most under-appreciated shows from the ’90s and 2000s, but those who do love the show know that it is great for several reasons. The Halliwell sisters will always be the greatest and most bad-a– female leads on TV, so it isn’t surprising that instead of a diner or cafe they owned an extremely cool nightclub aptly named P3. Not only did we get to see The Charmed Ones kick back and relax while rocking the best of ’90s club fashions, but P3 also featured some great live music with the likes of The Flaming Lips, Dave Navarro, Goo Goo Dolls and Smash Mouth, just to name a few. Of course, it is also one of the only nightclubs where the patrons wouldn’t have to be on drugs to see some crazy and magical things happen.

Looking back, Boy Meets World reminds us of a lot of things but most of all the innocence of TV shows and life in general at the time. Chubbie’s was a place where young kids hung out all the time, even at night and there was no drug dealing or major brawls and parents trusted their kids to be out alone just enjoying a good burger. Chubbie’s was actually impressive for a place for local kids to hang out because it featured not only good food but a pool table, jukebox and dart board. A lot of break-ups and make-ups went on at Chubbie’s, making it possibly the second most important location in the show aside from the school. As the gang grew up and headed off to college, their hangout spot became the campus lounge which was much lamer in comparison.

7. The Bronze (Buffy the Vampire Slayer)

Buffy was another awesome show with a great female lead and a great hangout spot in the form of The Bronze. First of all, it was awesome because it let in minors but didn’t serve them drinks and what other establishments could have a yearly “Fumigation Party” where captured or killed cockroaches could be exchanged for free drinks and still stay in business? The Bronze was the perfect place to unwind by just simply relaxing or having a full-on dance party; either way, a lot went down at this spot over the years making it very important to the show. Of course, it also featured some great ’90s indie rock which makes us miss the decade and the show even more.

The Talon may have been located in the little town of Smallville, but with a superhero in their midst as well as some meteor infected freaks, The Talon was a great place for some big things to happen and was Clark’s first job before he was busy, you know, being freaking Superman. It may have served as a coffee spot, but it also doubled as the venue for many local events making it the coolest place to hang out when not in school. Also, it was run by Lana Lang herself which made the place cool by association. Unfortunately, even though Lana fought to save and keep the Talon over several seasons, it burned down as the show came to an end, but that also just reinforced how important it was.

Tree Hill, North Carolina didn’t seem like it had a lot going on in terms of entertainment but thanks to the smart and talented Peyton Sawyer that was changed. One Tree Hill was heavily influenced by music and the creation of Tric let it be an even larger part of the show. It was the place where Haley first performed and where other big names performed as well, including Fall Out Boy, The Wreckers, and Jack’s Mannequin. Tric left everyone wondering why the heck more towns didn’t have an “all ages” club where you could dance, listen to great music and if you were of age, grab a drink. It also offered an outlet from the quieter and more personal space of Karen’s Cafe, that was the place for more of the adult drama. Get your coffee somewhere else Dan Scott!

4. MacLaren’s (How I Met Your Mother)

The best thing about MacLaren’s, one of the favorite fictional TV bars, is that it is just like many real-life bars, meaning we have all probably had these same experiences in a very similar place. The 2000’s answer to Friends’ Central Perk or Cheers, Maclaren’s is the place where you can always count on finding your friends, having a good beer, good conversation or get hit on with Barney in the room. MacLaren’s was the central location of some of the funniest moments but also some of the most serious, making it important to not only the characters but the entire story. In short MacLaren’s is Legen…wait for it….dary!

The Max was without a doubt the coolest place on TV in the ’90s, starting with the fact that it was owned and run by an actual magician. Saved by the Bell, much like Boy Meets World, reminded us of a more innocent, simpler time where the episodes could be entirely based on saving The Max and still be riveting. The Max was the place where all of the greatest dances happen, including Slater doing ballet, and featured many of the characters’ fights and the drama that ensued. When The Max was involved you know there was going to be way more entertainment than just some good food and friendly conversation and in reality, this high school diner is better than what most colleges can offer.

The intense drama of Beverly Hills 90210 needed somewhere to play out and The Peach Pit was the spot, making it one of the most iconic TV hangouts. Some worked there, but most of the main cast members flocked to the place to sort out or just talk about their issues. It obviously didn’t hurt when a club, The Peach Pit After Dark, was located adjacent to the initial family friendly location, creating a new space for the kids to let loose and get into trouble. This new spot also had some excellent ’90s performances including The Barenaked Ladies, Collective Soul, Brian McKnight and Christina Aguilera in her “Genie in a Bottle” heyday.

Last but certainly not least is THE ultimate TV hangout spot that was so important to the show it was basically the 7th friend. If they weren’t at their apartments, they were at Central Perk, and because there really was only enough room in there for about 10 other people because of the massive reserved seating the Friends took up, it was their spot. Everything happened in Central Perk including Ross and Rachel’s first kiss and one of the best parts just may have been Phoebe’s performances because the place wouldn’t be the same without a good rendition of “Smelly Cat.” Even Gunther made that place great as it takes it place as the best TV hangout spot of the ’90s and ’00s.