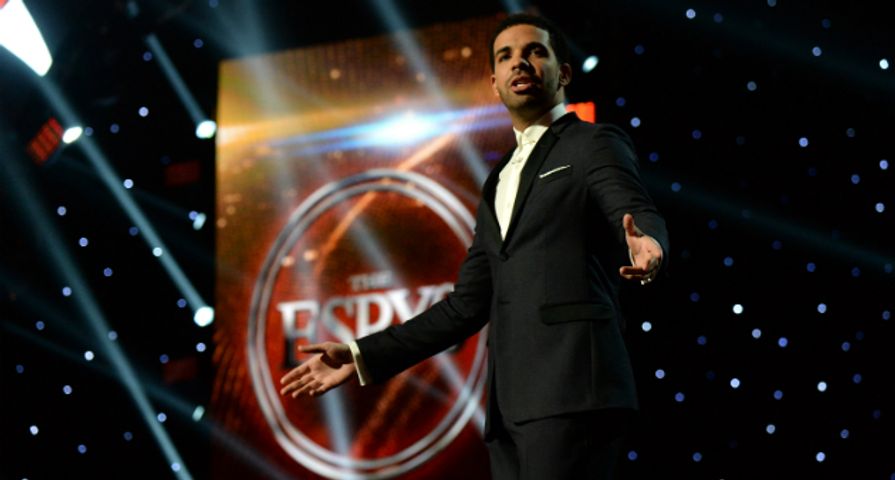 (LOS ANGELES) — Drake took some playful jabs at Macklemore and Iggy Azalea as host of the ESPYS award show on Wednesday night.

During one segment of the ESPN ceremony, which was held at the Nokia Theatre in Los Angeles, Drake performed a song titled “Honorable Mention” — a tribute to athletes who have failed to win a championship.

Singing to Oklahoma City Thunder basketball player Kevin Durant, Drake quipped, “I know you understand real talent doesn’t always win championships, like real music doesn’t always win Grammys.” A photo of Macklemore with a Grammy in hand was then shown on a screen behind Drake.

After Macklemore won a bunch of Grammys earlier this year, and then sent a text message to Kendrick Lamar apologizing for his victories, Drake told Rolling Stone that Macklemore’s gesture felt “cheap” and not “genuine.”

Later in “Honorable Mention,” Drake gave a shout-out to Iggy Azalea and her boyfriend, Los Angeles Lakers basketball player Nick Young, calling them a “poor man’s Jay and B,” referring to Jay Z and Beyoncé.

He followed “Honorable Mention” with a song titled “Side Pieces,” about athletes’ activities with women on the road. He was joined by Brian McKnight for that one.

Drake closed the segment with a song that sampled an interview with embattled Los Angeles Clippers owner Donald Sterling in which Sterling declared he’s not a racist.

Drake’s enemy-turned-friend, Chris Brown, popped up during a sketch in which Drizzy was “feuding” with basketball star Blake Griffin via a series of practical jokes. As Drake was set to undergo an appendectomy, it was revealed that Chris and Blake would be the ones operating on him. They also pretended to tie up Drake so they could take over ESPY hosting duties.

Drake kicked off the ESPYS with a funny monologue in which he riffed on Sterling, LeBron James returning to the Cleveland Cavaliers, and the Washington Redskins team nickname controversy, among other sports topics.
ABC News | ABC Sports News

Check out Drake’s monologue below and let us know what you think: