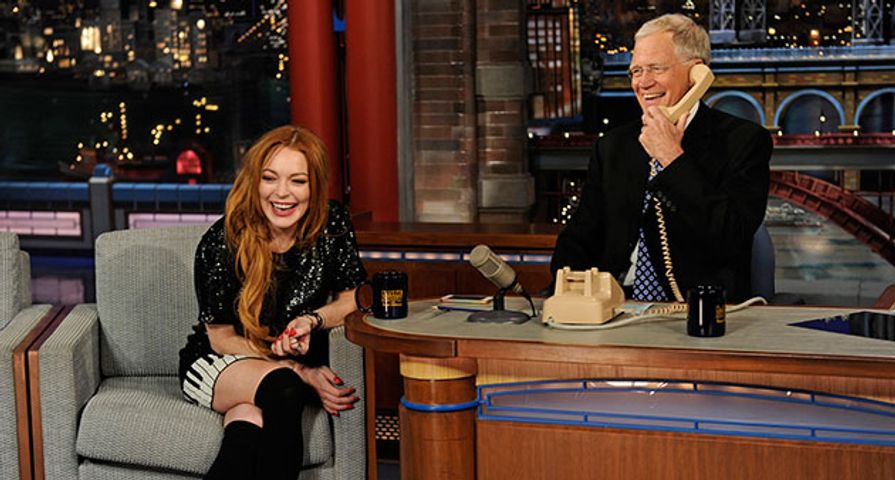 Letterman made a rare comment about his own struggles with alcohol, saying, “I’m an alcoholic, I drank myself every night” and said to the actress, “It’s so nice to…have your control back, isn’t it?” Lohan nodded, saying “Yeah…My life is in a good place.”

The pair then talked about Winfrey, who produces Lindsay, Lohan’s OWN docuseries, and who the actress sees as a mentor. At one point, Lohan asks, “Should we call Oprah?”

At first, Letterman says no to Lohan’s idea, but he’s later convinced to give her a call after Lohan chants “Op-rah! Op-rah!,” and gets the audience to chime in.

When Winfrey picks up, Letterman says in a high-pitched voice, “Yes, could I speak to Oprah Winfrey, please?…Hi, this is Lindsay Lohan’s secretary.”

The trio bonded over Lohan’s recovery and their mutual love of meditation.

Winfrey and Letterman, who announced last week that he’ll retire in 2015, are now friendly after years of feuding. The two buried the hatchet during Winfrey’s 2005 appearance on The Late Show. Their disagreement originally began around 1989, after Winfrey appeared on Letterman’s former NBC talk show. At the time, she said she felt that Letterman had turned the audience against her.

Check Out the Video of David and Lindsay Prank Calling Oprah Below: