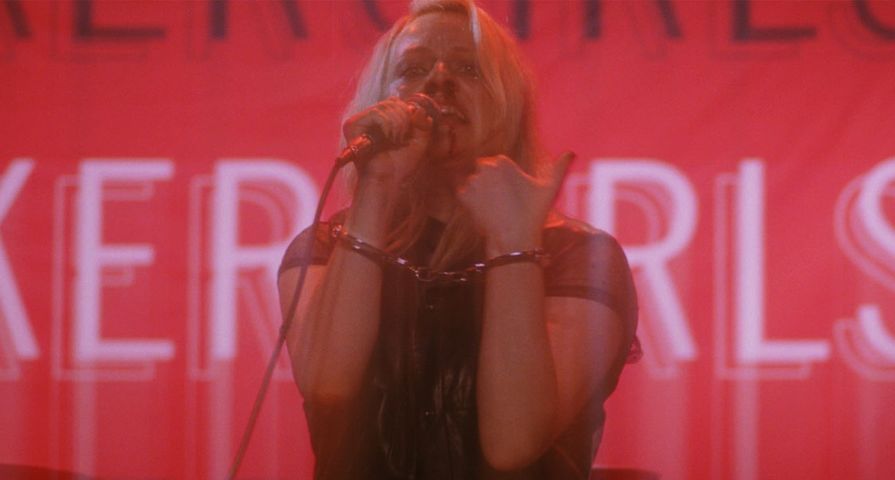 The Toronto International Film Festival was filled with a flurry of music-focused films, many of which featured a female musician as the lead. Her Smell, directed by Alex Perry Ross, followed suit as Elisabeth Moss took center stage as a blurred and confused punk rocker in the midst of a mental breakdown. Although the film had strong character development to the point that it was almost unpleasant to watch, the lack of location changes and over-extended scenes made for a somewhat flat viewing experience.

Her Smell begins by showing a cinematic, vintage looking clip of a young ’90s girl band, Something She, celebrating their success. It’s clear right off the bat that these women are reckless, but considering their genre of music, this doesn’t come across as out of place. The film then flashes into the current day in which it’s clear their lead band member, Becky Something (Moss), has fallen into a downward spiral. Becky’s unpredictable, outlandish behavior and addiction has led the group to a quick decline. From last-minute canceled tours to irresponsible parenting and a divorce, it’s clear Becky’s life has hit rock bottom and she has dragged her bandmates alongside with her. Her mental degradation hits its peak when she forces her way on stage to perform with blood streaking her face and her hands in cuffs, then is dragged off stage by security.

Her Smell gives an accurate and honest depiction of a punk rocker’s downward spiral and many refer to the inspiration of Becky as Courtney Love circa the ’90s. Although the real-time, seemingly unedited style of the film gives it a raw feel, it also makes the scenes feel overly drawn out, which is cringe-worthy at times. One will find themselves at the edge of their seat waiting for a pause in the monstrous behavior that Moss displays on film as Becky. Not to mention, a majority of the scenes take place in the claustrophobic backstage area, which makes the entire experience all the more unbearable. Luckily, the film gives its audience a well-deserved breather following Becky’s final breakdown. We are given a cathartic scene of her post-recovery where she’s calm, somewhat collected, and has revived her motherly qualities in taking care of her daughter, who’s now 7-years old.

One important thing to note of Her Smell is Moss’ incredible performance in playing Becky. Her role in the popular series The Handmaid Tale is quite different in comparison, which is true confirmation of Moss’ incredible acting abilities. Becky’s character, in general, is quite unlikeable, which is a testament to Ross Perry’s impressive directorial role. Popular stars Ashley Benson and Cara Delevingne also take on a role as Becky’s proteges and do a stellar job at playing the wide-eyed newbies fawning over Becky’s past in the industry.

Overall, Her Smell is jarring and at times painful to watch because of how raw and honest it feels. It’s important to go into the film knowing fully well that it won’t be a calm, enjoyable viewing experience, but Moss’ incredible acting and the real-time, uncut style of the film is definitely deserving of praise.