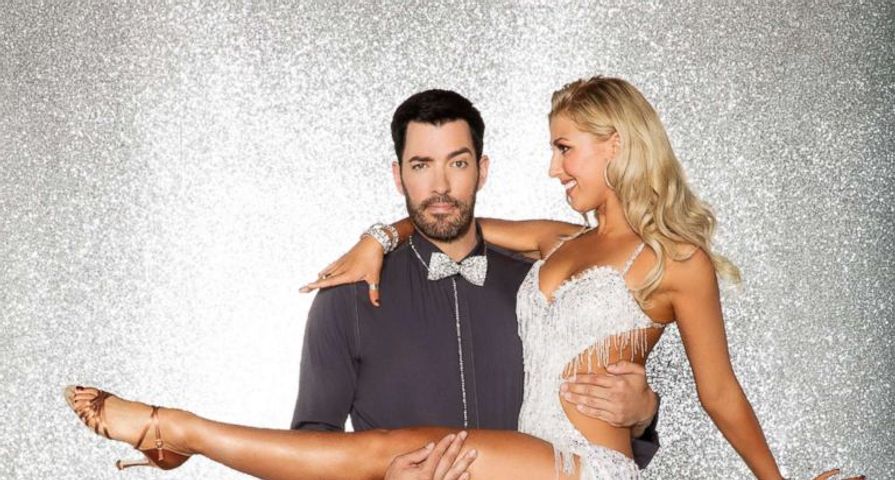 It may only seem like a few weeks ago season 24 of Dancing With the Stars came to an end, but the summer has flown by which means season 25 is here! ABC has slowly teased information about who will be competing this season, revealing HGTV star Drew Scott and WWE Diva Nikki Bella will be taking a turn on the dancefloor and on Wednesday, September 6 the rest of the cast who will be competing for the Mirrorball Trophy was announced on Good Morning America! As always, the star-studded cast includes famous personalities from all facets of the entertainment world including athletes, reality stars and singers! Ahead of season 25’s premiere on September 18, 2017, check out the full cast for the season:

Ballas is back! Dancing with the Stars fans will be happy to see Mark Ballas back as a pro after two seasons away and ending season 22 with a second place finish. The two-time mirror ball winner has been partnered with talented violinist and YouTube star Lindsay Stirling who has over 1.9 billion views on her YouTube channel and sold out tours thanks to her skills on the violin, but she is going to have to learn to be as quick with her feet as she is with her hands, as she hits the dancefloor for the first time with Ballas.

Debbie Gibson is a true entertainer in every sense of the word. At only 16 years old she topped the charts with her hit “Only in My Dreams.” Now at 47, Gibson is also a record producer and an actress with Broadway experience which is always an asset on Dancing With the Stars. Gibson has been paired with new pro Alan Bersten who was promoted to a pro for this season after stepping in for Maks Chmerkovskiy in season 24 when he got injured while dancing with Heather Morris. Bersten has a lot to prove in his first official season as a pro which will make the competition even more important to him and Gibson.

Let’s hope that Sasha Pieterse’s time on the dancefloor is much less dramatic than her role on Pretty Little Liars. The stunning actress, best known for her role in the hit series, has joined Dancing with the Stars now that Pretty Little Liars has wrapped up, and is also focusing on her music career so fans will see if she can become a triple-threat act in Hollywood with acting, singing and dancing. Pieterse will be dancing with three time DWTS veteran Gleb Savchenko who has yet to crack the top three, but came close in season 23 when he and his celebrity partner Jana Kramer placed 4th.

Dancing With the Stars has seen quite a few impressive athletes over the years, but few have been quite as impressive as former NBA star Derek Fisher. Fisher won 5 NBA Championships as a part of the Los Angeles Lakers during his time in the league and after retiring served as president of the National Basketball Players Association (NBPA). Fisher has the benefit of dancing with longtime DWTS pro dancer Sharna Burgess who will be competing in her 10th season and, after placing 3rd once and 2nd twice, she is hoping for her first big Mirrorball win!

One of the earliest contestants to be announced for season 25 was Vanessa Lachey and her husband Nick Lachey which will give added drama to the season as the married duo battle it out on the dancefloor. The former Miss Teen USA, TRL co-host and Entertainment Tonight correspondent has been paired with beloved pro Maksim Chmerkovskiy. Season 25 will mark Maks’s 17th season as a pro on the series and will be looking for a big comeback as his last 1st place win was back in season 18 with Meryl Davis.

Barbara Corcoran is following in the dancing footsteps of her Shark Tank co-star Robert Herjavec who competed on season 20 of the show where he placed 6th. Corcoran has been on the popular series for nine seasons and while she has mastered investing and the world of business, the ballroom will be a whole other world for the Shark. Corcoran has been partnered with Keo Motsepe who has competed on five previous season, but has never placed better than 6th. Hopefully Corcoran and Motsepe’s partnership will lead them both to success!

One day before the big cast announcement on Good Morning America, Dancing With the Stars pro Cheryl Burke announced her return to the series after a season away, and she will be dancing with former NFL pro Terrell Owens. Over his 15 years in the league, Owens became known as one of the most skilled and most exciting players in the NFL who always has a lot to say about his own skill and is quick to shoot down the competition. While Burke placed 1st back in seasons two and three, she has yet to see another Mirrorball Trophy, and is hoping Owens fancy footwork on the field can translate in the ballroom for a big win.

Jordan Fisher will be one to watch out for this season because of his experience in theater and choreography with his roles in Grease Live, Hamilton and the Teen Beach films. He may only be 23, but with his acting, singing and dancing skills already on display, he will be stiff competition for others with no dancing experience at all. Fisher has been paired with Lindsay Arnold who first became a pro in season 16, but after placing 8th took a few years honing her skills and came back stronger than ever in season 21 where she and her partner Alek Skarlatos placed 3rd. She has since placed 4th, 3rd, and last season was runner-up with David Ross. Between Fisher and Arnold it seems there is already a dominant couple to look out for in season 25.

Valentin Chermkovskiy has proven his skill as a pro, specifically working with athletes and, after dancing with Olympian gymnast Laurie Hernandez and placing 1st in season 23, he has another talented athlete for season 25. Val will be dancing with Paralympic Gold medalist swimmer Victoria Arlen. At the age of 11 Arlen fell ill with a disease that left her without the use of her legs for almost 10 years, but she battled back to become a Paralympic athlete, and is clearly not afraid of a challenge.

Since taking a break from Hollywood following his longtime starring role on Malcolm in the Middle, Frankie Muniz has done everything from joining a band, managing a band and even became a race car driver, so now he is adding dancer to his list of talents. The beloved sitcom actor has been paired with Witney Carson who is entering her 8th season as a pro and is hoping to get back to the top of the scoreboard after winning her first and only Mirrorball Trophy with Alfonso Ribeiro back in season 19. In the past three seasons Carson has only placed 8th, 10th, and 12th, which means she will be pushing Muniz to do better.

Source: ABC/Craig Sjodin
Dancing With The Stars Juniors: Everything You Need To Know

Dancing with the Stars has featured a lot of athletes over the years, but never a WWE Diva! Nikki Bella was one of the first announced and is the longest-reigning Divas Champion in the world of wrestling. Along with her twin sister Brie, the two became two of the most popular Divas in the industry and even landed their very own show. As the fiancee of John Cena, and a talented wrestler herself, she is clearly a very strong competitor and faces every challenge with no fear which means she will be one of the fiercest stars out there. Bella will be dancing with Artem Chigvintsev, who has competed in five previous seasons as a pro, but has not had much luck.

With his wife Vanessa Lachey competing with Maksim Chmerkovskiy, it is only fitting that Nick Lachey has been partenerd with Maksim’s wife Peta Murgatroyd in what will be one great battle of the couples. Lachey became popular as the frontman for the boy band 98 Degrees and has since held a passionate fanbase as he transitioned into solo music and even did a stint on reality TV. Of course his brother Drew proved to be one of the most memorable stars to compete on the series so hopefully Nick has the same skills. After her wedding to Maks and welcoming their son Shai, Peta is back in pro mindset and the two time Mirrorball Trophy champ will have high expectations for her star partner.

In the biggest star announcement of the season, insanely popular HGTV and Property Brothers star Drew Scott will be joining the cast, and will be doing so with last season’s champ Emma Slater. Aside from being one of HGTV’s biggest stars alongside his twin brother Jonathan, Drew is actually a multi-talented man with training in karate and acting which means he may be a bigger threat on the dancefloor than he seems. Of course Emma Slater will be competing for back-to-back Mirrorball Trophy wins after taking it home in season 24 with the NFL’s Rashad Jennings.