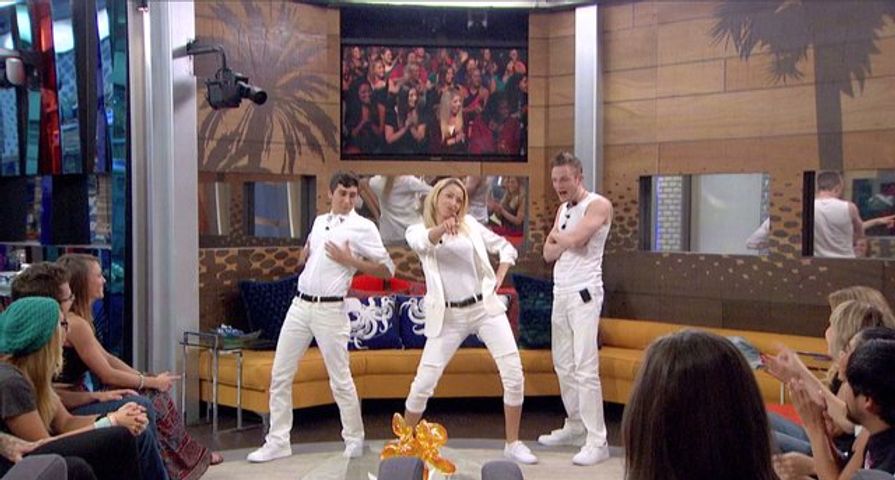 In a lot of ways, this season of Big Brother was a kinder, gentler version of the show we’ve come to know and love over the past fifteen years. The house guests all got along (more or less) with no crazy fights, no real villains, minimal smoking and next-to-no foul language — it was all very PG, so to speak. But that’s not to say it wasn’t fun to watch. Like all good things the summer brings, Big Brother 17 has come to an end, so in honor of another great season, we’ve picked our top 10 zaniest, wackiest, most unforgettable moments from the show. Oh, Mylanta!

Audrey Middleton made Big Brother history as the first transgender houseguest ever to play the game, but she will likely be best remembered for her scary stint as “The Blanket” — her ghost-like alter-ego that was immortalized in the Comic Book Cover Veto Competition. After alienating everyone else in the house due to her incessant lying and overplaying the game, Audrey was nominated for eviction and spent the next few days hiding in bed and — when she had to get up — creeping around the house covered by a blanket. Oh, Mylanta! Audrey, you had so much potential in the beginning…why did you have to go and ruin it, girl?

Every season needs a goofball, and this year’s purveyor of laughs came in the most unlikely form of camo-wearing, Asian good ol’ boy, James Huling — he had a countrified accent and the unrequited crush on city girl, Meg. But while this dude seemed all business at the start — killing the first HOH competition and putting up some big targets — he won us over with his love of pranks. Whether he was hiding in garbage bags or popping out of closets, James never failed to scare the crap out of whatever unsuspecting houseguest happened to be his mark. Oh, Mylanta! We love you, James!

8. Meg Wipes Out And Hits Her Head

During the highly anticipated Otev challenge, when a giant animated head —this time done up to resemble a giant hamburger roll — hosts the veto competition, poor “Grandma” Meg Maley slipped while racing up the lubed-up ramp to reach Otev and fell hard, whacking her head on the ground. Oh, Mylanta! This was no ordinary fall — you could practically hear the “thwump” as Meg’s skull hit the wooden platform. We were surprised she didn’t have to be medically evacuated from the game — and even more surprised that she appeared to be completely normal afterwards. This is one grandma who can take a licking and keep on ticking!

Any moment when Big Brother would turn the camera on Steve Moses and capture him talking about something that either made him excited or stressed him out was a great moment. Oh, Mylanta! He just can’t keep those hands still!

When the world’s most unlikely dentist, Johnny “Mac” McGuire, used his dentistry skills to figure out the Twin Twist by noting that Liz sometimes appeared to have a cap on one tooth and sometimes didn’t, it was such a cool bit of detective work that we had to place it in our top 10. And it also proved for us that Johnny Mac really is a dentist, not just some molly-popping, couch-surfing, party boy, which is how he comes across — oh, Mylanta! Did we just say that?

Unlike the showmance between Shelli and Clay, which was pretty serious from the get-go, the showmance between Austin and Liz was a lot more entertaining, and a lot less, well…equal. While thirty-year-old professional wrestler and ponytail-beard-wearer, Austin Matelson, was smitten with Liz from the start, twenty-three-year-old Miami party girl, Liz Nolan, took much longer to succumb to Austin’s charms. It was pretty funny watching Liz and Julia updating each other on what had gone on in the house while they were still switching places during the Twin Twist, and hearing the annoyance in Julia’s voice when Liz told her she had to be flirty with Austin, who still didn’t know Liz and Julia were two different people. It was clear at that point that Liz was just flirting with Austin for strategic reasons, but at some point over the course of the game, she began to develop real feelings for him. But it always seemed as if Liz was warming up to Austin more out of sheer boredom than anything else — and her conversation with her sister on the hammock, when she talked about what a bad kisser he was just solidified this. Oh, Mylanta! It will suck for Austin to see this clip when he gets home!

Zingbot, the sassy visiting robot, got really nasty with his insults this season. Poor Julia got it the worst, with Zingbot calling her “the less attractive, less intelligent and less charming twin,” and then he really shook things up when he asked her sister, Liz, if she was more excited about meeting Austin’s mom, his dad or his girlfriend. Oh, Mylanta! We had completely forgotten that Austin even had a girlfriend at this point (if we ever knew at all), since he seemed so completely nuts about Liz, and although Liz apparently knew this, she clearly didn’t like being reminded of it. She noticeably cooled off toward Austin afterward, worrying Austin and throwing him off his game. Way to go, Zingbot!

In one of the funniest montages of all time, Big Brother strung together a bunch of clips of BB17 hottie, college football player, Clay Honeycutt, saying gibberish. There were a couple of times earlier on the show, when Clay had seemed a little hard to understand, but this was the first time viewers were made fully aware of Clay’s apparent mumbling problem. It was made even better by the fact that Clay came across as so “perfect” in just about every respect, but in these clips he sounds like someone who’s taken way too many drugs — or taken one too many hits to the ol’ noggin on the football field. Best quote of BB17: “I’m a furless bat!” Oh, Mylanta!

2. Meg and Clay Almost Make Out

Was there any moment more shocking this season than that crazy bathroom scene just before Clay’s eviction, when a drunk, emotional Meg came over to Clay and started hugging him and telling him how much she was going to miss him? The fact that Clay was TOTALLY reciprocating made it that much more awkward — especially considering that he had just finished campaigning to keep his girlfriend, Shelli, in the house over him. Did this thing between Clay and Meg come out of nowhere, or what? Meg was all, “I love you, you’re my number one dude, I can’t wait to see you in New York,” and it sounded as if Clay was mumbling his agreement, although it was hard to tell because his head was buried against Meg’s cleavage. Oh, Mylanta! At the end of the clip, Clay asked Meg not to tell anyone about what just happened, but poor Shelli is bound to find out about it now… Seriously, what the heck was that?

Oh, Mylanta! Whoever is behind the scenes at Big Brother coming up with all the crazy competitions and embarrassing punishments is one heck of a creative genius. As part of their punishment for losing the Battle of the Block in week four, Liz, Jason and Johnny Mac had to dress up all in white and perform a 90s boy band dance routine whenever Big Brother randomly commanded them to. Mad props to these three houseguests for always being prepared and killing it with their performances every time. We also loved seeing the number of house guests who came out to watch their performances dwindle from the whole house for the first few to a lone Jackie in her housecoat for a middle-of-the-night performance. But even when they were roused from bed, the Whackstreet Boys gave it their all. In fact, they were so good that the real Backstreet Boys gave them a shout-out on their Twitter page. Big Brother, if you’re reading this, can you please bring the Whackstreet Boys back for a special performance next season?