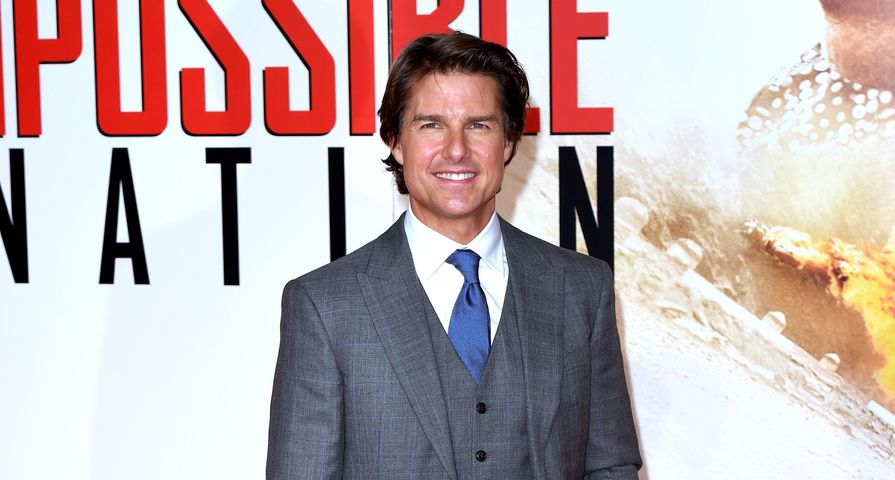 Tom Cruise is back on the big screen in Mission Impossible: Rogue Nation, which hits theaters July 31, 2015. Although he’s always been a fixture of the tabloids, which are mostly interested in his relationships with ex Katie Holmes and daughter Suri and his puzzling status as a Scientologist, he’s still undeniably a movie star oozing with charm and charisma. Here are 9 crazy facts about Tom Cruise — we barely believed them too!

That’s right: Tom Cruise is 53-years-old, born on July 3, 1962 in Syracuse, New York. He looks so unbelievably good for his age, from his lush brown hair to his youthful face to his impressively ripped body, that we wonder if he’s got some kind of secret health habit like injecting the DNA of baby sharks. Plastic surgeons have speculated that he’s probably had some work done on his face, and we wouldn’t be surprised to hear that he has had some enhancements done to his hair. Lots of stars around Tom’s age look amazing (Diane Lane, at 50, and Sandra Bullock, at 51, come to mind), but George Clooney is only one year older than Tom and looks like he could have a decade on him. Google image search some of Tom’s co-stars from movies in the ’80s and ’90s and you’ll be shocked to see how differently they have aged.

8. He Actually Hung Off a Plane for Mission Impossible: Rogue Nation

Tom made headlines when fans found out that he did an insane plane stunt for the new Mission Impossible movie in which he was attached to a plane while it took off. The movie’s director, Christopher McQuarrie, told Yahoo UK that he and Tom felt they needed to outdo the stunts in the last Mission Impossible. “While searching for different locations, the production designer James Bissell bought me a model of this Airbus airplane and presented it as something we could use in the movie,” McQuarrie explained. “I suggested to Tom, ‘What if you were on the outside of this thing when it took off?’ I meant it as sort of a half joke, but he said back to me, ‘Yeah I could do that!’” Tom told Jimmy Fallon that he did eight takes of the crazy stunt, and admitted that “it was kind of intense.”

Also on his appearance on The Tonight Show with Jimmy Fallon, Tom proved to everyone that he’s a master of the lip sync. He did an emotional version of “Can’t Feel My Face” by The Weekend, offering up some crazy dance moves to go with his performance. “This is so ridiculous,” Cruise said. “I love it.” We agree — and we’re not surprised that the video of his lip syncing went viral. Tom has definitely come a long way from his bad karaoke performance in Top Gun! He also said that he’d be willing to star in a sequel to the ’80s classic. “It would be fun. I would like to get back into those jets,” he said. “It would have to be practical. I don’t want any CGI jets. I want to shoot it like how we shot the first one.”

6. He’s Been Accused of Some Serious Child Labor Infractions

We’re all aware of Tom’s public advocacy of Scientology, the new age religion that has been under scrutiny the last few years with high-profile members like writer/director Paul Haggis leaving the Church and writing about its shocking practices. The documentary Going Clear also shed light on the controversial religion and the many members who are now choosing to leave. Tom seems to have distanced himself from Scientology lately as bad press continues to mount, but one thing we can’t get over is the allegation that his 42nd birthday party was powered by the labor of children who were part of the Church’s Sea Org. According to The Village Voice, this organization gets children to sign billion-year contracts and work crazy hours for 50 dollars a week.

5. He Once Wanted to Be a Priest

Tom was brought up in the Catholic church, and briefly went to a Franciscan seminary in Cincinnati on a church scholarship. At the time, he planned to become a Catholic priest, but later abandoned those ambitions. He told Interview magazine that he was “not too close” to becoming a priest. “I was there for one school session,” he explained. “I remember we used to sneak out of the school on weekends and go this girl’s house in town, sit around, talk and play Spin the Bottle. I just realized I loved women too much to give that up.” He was also a linebacker on the varsity football team in his senior year, but ended up getting kicked off the squad after he got caught drinking a beer before a game. Tom actually went to 15 different schools in 14 years.

Tom’s marriage to Katie Holmes was probably one of the most highly publicized ones in Hollywood. Remember his notorious Oprah appearance when he jumped up on a couch and claimed he was in love? Tom and Katie, dubbed “TomKat,” got hitched in 2006 and had daughter Suri that same year. They split up in 2012, when Katie filed for divorce. Before that, Tom was married to Nicole Kidman from 1990 to 2001, and she still had nice things to say about him in 2006. She said in an interview, “He was huge; still is. To me, he was just Tom, but to everybody else, he is huge. But he was lovely to me. And I loved him. I still love him.” Tom was first married to Mimi Rogers in 1987. This was shortest marriage. It lasted only two years and their divorce was finalized in 1990.

2. His Teeth Are Off Center

Hats off to Buzzfeed for doing some very important investigative journalism and uncovering the truth about Tom’s teeth: his front right tooth is at the center of his mouth, instead of set off to the right. They’ve drawn lines down the middle of his face in six different photos to prove it, all involving different tilts of his head to show different perspectives. The site claims that you’ll never be able to look at Tom the same way after learning this fact and seeing the evidence, and we have to admit that they’re right!

1. He’s Responsible For the Popularity of Ray-Bans

Ray-Bans have been cool-looking sunglasses for as long as we can remember, but the company owes a lot of its success to Tom, who wore them in his acting debut as Joel Goodsen in the 1983 film Risky Business. According to Diffuser, sales of the sunglasses went up 2000% after the film was released — talk about star power! We hope that sales of cigarettes didn’t do the same thing (Tom smokes in the movie).