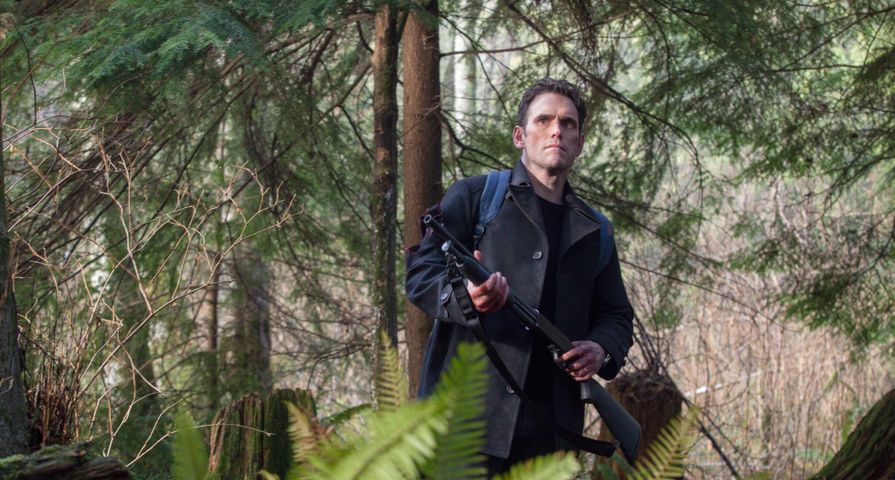 Fox’s Wayward Pines mini-series is coming to an end this week and including time-shifted viewing data the series is the most successful of the summer in the coveted 18-49 demo. It’s not hard to see why as the M. Night Shyamalan produced series has been a true summer surprise and picked up steam every week with reveal after reveal. Yet there are a number of behind the scenes stories that are as fun to explore as the series itself! Here are 9 things you didn’t know about Wayward Pines

It’s been a while since M. Night Shymalan has had a hit…a long while.

And it’s not from lack of trying but, after the genius of The Sixth Sense, the talented filmmaker couldn’t return to that level of success. Unbreakable, Signs, The Village, even a big screen adaptation of Nickelodeon’s very popular The Last Airbender couldn’t do it for him. Yet because Hollywood knows what he’s capable of doing, he keeps getting more chances to come back and try again. Wayward Pines was one of those chances.

Shyamalan was contacted by Chad Hodge, a screenwriter in the middle of working on a adaption of Blake Crouch’s Wayward Pines with an offer to switch mediums. After hearing the pitch to come onboard to co-produce the series and direct the first episode (thus setting the tone), Shyamalan replied he was in “as long as everyone in it isn’t already dead.” Good call.

While landing Shyamalan was one win, Hodge still needed a cast and he was able to get some big names on board and in turn lead to some fun side stories.

Take Terrence Howard for example who was the first actor approached. In a interview with Fast Company, Hodge recounts that Howard was the only actor who did not want to know the whole plot or what happens to his character. He just wanted to know the tone of the series before accepting the role.

Meanwhile, the script was enough to sell Matt Dillon who had never done a TV series in his entire career. What’s interesting here is that Dillon and Howard previously co-starred together in the Oscar winning film Crash where the roles were reversed. While in Crash, Dillon was the power hungry cop abusing his power, Howard is the power hungry cop abusing his role with Dillon in Wayward Pines . The cast also has other connections in that Carla Gugino appeared on HBO’s Entourage opposite Matt Dillon’s brother Kevin and co-stars Melissa Leo and Reed Diamond both had work together on the long-running NBC drama Homicide: Life on the Street.

The picturesque/creepy town of Wayward Pines itself was created in three weeks and all the main-street shots were done towards the end of filming. In a diary for The Hollywood Reporter, Hodge goes into unique details about the set itself.

Hodge mentioned they chose to shoot in a different order to allow the crew time to build the sets which are inspired by the city of Telluride, Colorado. He also had to have time to create fake store names that were to be cleared by the legal department. Each store’s name actually is a clue the overall mystery or ties back a show theme. And as for the electrified walls that surround the city…the crew only built one section of it and used CGI to duplicate it out to make it look bigger.

Showrunner Chad Hodge is no stranger to TV having worked on The CW’s Runway and NBC’s The Playboy Club but for Wayward Pines it was going to be a different animal. Hodge read the first book in the Wayward Pines trilogy and immediately became a fan. He then wrote the script for the series on spec utilizing author Blake Crouch to plot out all the details.

Although he had Crouch behind him, Hodge still needed to explain to the network what the series would ultimately look like so he designed a Wayward Pines “Bible.” It was Hodge’s way of explaining evert facet of the series so executives could have all the answers they needed in one place. The move worked and executives ordered it to series…Hodge was then able to use the Bible when further plotting out and eventually shooting the episodes.

Wayward Pines was created as a 10 episode mini-series based on the book trilogy of the same name by Blake Crouch. Yet the books themselves didn’t pack enough of a punch to adapt them one at a time. Producer Chad Hodge, who worked alongside Crouch, recognized that if he was to do a book-by-book adaptation he’d only has enough material to fill a few episodes a season, which is a problem in today’s Hollywood.

While its possible producers could have done three years’ worth of made-for-TV movies it would take away from the experience and tick off audiences who would expect to know at least some of what was going on after part one. So Hodge and the team doubled-down on creating the full series. The drama has done very well when looking at time-shifted numbers; in fact it leads all other summer shows in the coveted 18-49 demo which has prompted talk of a second season. While the source material will have dried up Hodge and Shyamalan have both said they’d be open to a continuation, but both promise when the 10 episodes end this week viewers will have all the answers.

It’s not just the small screen that’s getting to experience Wayward Pines…the second screen is getting in on the fun. Gone is a 10-episode companion series to the Fox event drama that tells the story of Eric Barlow, who is desperate to find his missing wife Sarah. The further he searches the deeper into the Wayward Pines madness he gets.

Yet here’s the twist…it’s only for online viewers.

Gone is part of a product integration as it is sponsored by Microsoft Surface and plugged every week during one of the show’s commercial break. It’s a similar situation as to the one Theresa Burke (Shannyn Sossamon) goes through when looking for her husband Ethan (Matt Dillon), but now somewhat reversed and as it was revealed a few weeks the two stories DO dovetail. Just another fun twist in the Pines universe.

On its own, Wayward Pines probably just seems like a event series designed to be a summer special, yet it is more than that as the show was part of a larger scheme.

In recent years, Fox had announced a push into event programming with four big splashy projects…24: Live Another Day, Cosmos, Gracepoint and Wayward Pines. Each was envisioned as a one-season multi-episode “event” program designed to give audiences a strong solid story from start to finish in a short period of time.

24: Live Another Day and Cosmos both worked. 24 successfully rebooted the world of Jack Bauer (again played by Emmy winner Kiefer Sutherland) and Cosmos successfully re-imagined the world of Carl Sagan’s timeless TV series. Meanwhile, the less heard about the Broadchurch remake Gracepoint the better. That left Wayward Pines which had the benefit of like 24, being a summer series. It was a smart move that looks to have paid off.

Keeping on that event series track, Wayward Pines was the last of the four to go and with the sting from Gracepoint still there and the uncertainty of if Shyamalan could succeed, critics and audiences were gun shy.

It’s hard to blame them as this Twin Peaks-esque series didn’t really give viewers a lot to go on in terms of assurances. Wayward Pines also had to contend with starting up around the time of the NBA finals and the season finales of the bigger more established hit series airing on other networks.

Being a summer series audiences knew they’d have time to catch up on Pines so what ended up happening was they’d record the series and watch it later on. Take for example the first episode, which aired in mid-May to 3.6 million viewers and a 18-49 demo rating of 1.0. Those are terrible numbers and would spell cancelation for a typical rookie series. Yet when you look at the “Live+3” numbers (which include the weekend), the series grew 65% in viewers and 90% in the demo. All of a sudden the series had a debut of 6.2 million viewers and a 1.9 in the demo. Those are extremely solid for a rookie series (especially during the summer). The +3 bump has continued to pay off and the show’s remained a top summer series.

When laying out the season, Hodge and Crouch had to have quickly realized audiences were going to need to know the big “twist” before the end. For any series that can be dangerous, especially for one that was being compared to Twin Peaks, which fizzled not long after its big reveal.

Making matters more complicated was that with Shyamalan on board people were expecting a BIG twist and hoping to not have a BIG letdown afterwards. In a brilliant move though,  the trio were able to fill the audience in in such a way they had 95% of the information all in one sitting, but that missing 5% was enough to keep them coming back and not be ticked that they didn’t get all the info at once. What the show did was incorporate a series of TV-only twists that bolstered the source material. It told the same story but in way that expanded the experience and enhanced the enjoyment. Parceling out that last 5% over the last 5 episodes could have gone terribly wrong, but it didn’t!