9 Things You Didn’t Know About 98 Degrees 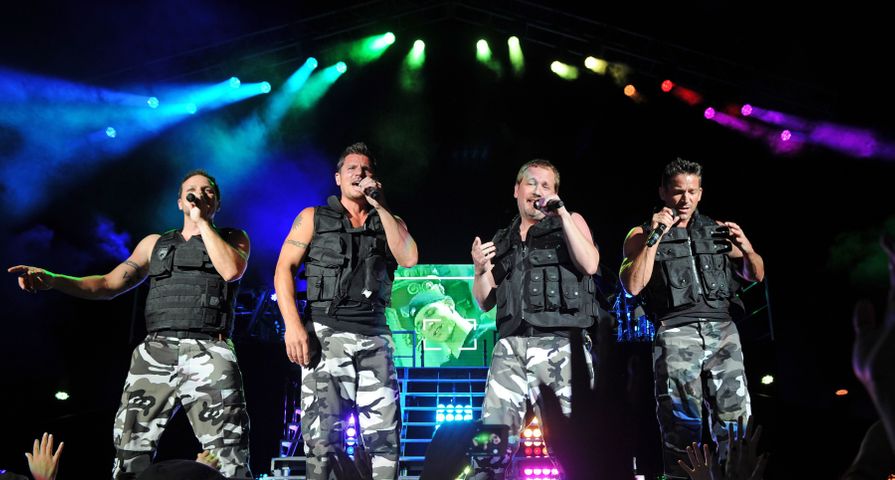 Music in the ’90s was all about forming bands and the most popular were boy bands! There were three boy bands who absolutely dominated the music industry at the time — these were the Backstreet Boys, *NSYNC and 98 Degrees. Unlike many of these bands who were put together through auditions and record labels, 98 Degrees stood out because they formed all on their own. The group consisted of brothers Drew Lachey and Nick Lachey, as well as Jeff Timmons and Justin Jeffre. 98 Degrees was incredibly successful during the peak of their career from 1997 to 2002. Although their musical reign was short, they sold over 10 million records worldwide and achieved 8 Top 40 hit singles in the United States. After taking an extended break in 2002, the group got back together in 2013 and recorded their first album in over 10 years! After their 2016 summer tour, things seem to be heating up again for 98 Degrees, so here’s a look at 9 things you might not have known about this ’90s band!

The two members who founded the group were Jeff Timmons and Nick Lachey. Timmins quit university to pursue a music career after he performed at a college party and received a lot of praise and positive reaction from female friends about his voice. So in 1995 he left school and was determined to make it big as a singer. “It was a pretty hasty decision, looking back, but I was young and dumb. Sometimes ignorance is bliss.” He then met Nick Lachey who was attending Miami University for sports medicine. The two hit it off and decided to form a boy band. Lachey left school, flew to Los Angeles and they started brainstorming who they could recruit to be in their band. Lachey thought of a friend, Justin Jeffre, who was at he the University of Cincinnati. They had performed together before, but just for fun, like dressing up as a barbershop quartet at the amusement park Kings Island and with a cover band. The last member to join was Lachey’s younger brother, Drew, who left his job as an emergency medical technician in New York City to join the group.

After forming the group, their next step was to come up with a band name that they all liked. Reportedly, they mulled over the idea of using names like Just Us or Next Issue, until they finally decided on 98 Degrees. When asked where the band name came from, Drew Lachey said, “It’s representative of the mood we wanted our music to create. It’s like steamy, hot, body heat. All our love songs!” When Jeff Timmons appeared on the talk show Bethenny back in 2014, he also dished on how the name came about and gave more details. He said at the time when they were all trying to find a name that fit; their manager had a “really hot girlfriend” and she said, “Why not call yourselves 98 Degrees?” They all loved it and that was that!

7. They Didn’t Always Get Along

Despite all of them having great chemistry musically and on stage, the members of 98 Degrees didn’t always get along. This is bound to happen when a bunch of 20-something-year-old guys come together to form a band. Jeff Timmons told People magazine, “We got on each other’s nerves a lot. There were a lot of burdens, both professionally and personally. We didn’t have the luxury of having a professional team with us. So there was a lot of stress. Frankly, we didn’t have much fun. It was a great ride, but it wasn’t a lot of fun.” He admitted that they had a lot of learning to do and when they reunited for another tour in 2013 and the summer of 2016 things went a lot smoother because they had all grown up, matured and been through things individually that gave them a little more perspective on how to deal. The little things didn’t matter anymore.

6. Hooking up with Fans

In a playful game of ‘Never Have I Ever’ with E! News, the members of 98 Degrees revealed some juicy secrets about which members have crossed the line with their fans. The question was, “Never have I ever kissed or hooked up with a fan.” The members had to hold up their signs which stated either ‘I Have Never’ or ‘I Have.’ Almost all of them confessed to crossing the line with a fan at some point in their career! The ones who admitted to it were Jeff Timmons, Justin Jeffre and Nick Lachey!

5. Relationship with Other Boy Bands

There were a lot of rumors floating around that there was animosity between some of the popular ’90s boy bands like Backstreet Boys, *NSYNC and 98 Degrees. It only seemed natural there would be a little bit of jealousy or competition between them all because their fanbases overlapped, but Jeff Timmons finally set the record straight when he denied that claim entirely. In fact, they were all friends! “Not a bit, we were all going through, the same thing at the time. We had a mutual respect of both those bands, their talent, and the struggle behind the scenes to even make it. Just yesterday I was asked, ‘Didn’t you guys hate *NSYNC?’ No, we partied with them, sorry!” he said. Drew Lachey admitted in an interview with E! News that he wrestled Joey Fatone in the lobby of a hotel once, but that they were just messing around because they are actually really good friends. Although, Jeff Timmons did say they had a little spat with another boy band in the UK, but they “wussed out.” Drew chimed in that was when they bonded with *NSYNC — over their shared dislike for the overseas band.

Dealing with crazy over-the-top fans comes with the territory of being a celebrity, but it seems when it comes to popular boy bands, it’s a whole new level of fandom! We’re sure they have many stories to share, but this one particular instance seems to stand out to Timmons: “One girl was obsessed with one of the songs, ‘Invisible Man,’ and we were doing something for NBA’s ‘Stay in School,’ and we were in the basketball arena, backstage before we could go rehearse before our little show. And someone had posed as an interviewer for NBC. She came into our dressing room and had the camera rolling and was asking us a bunch of questions. She seemed really nervous to be a reporter, and our security guy realized the light wasns’t on on the camera, and it wasn’t really recording. And she turned out to be that obsessed fan, she started freaking out like, ‘I’m the invisible fan, I’m the invisible fan!’ It was kind of scary, obviously harmless but sometimes you never know,” he said.

Many people assume singers and bands write their own songs, but most of the time that actually isn’t the case. There are professional songwriters who sell their music to artists. In an interview with Jeff Timmons, he was asked how involved 98 Degrees was with their song selection and how much control they had over what songs were put onto their albums. “We played a big hand in most of our albums, even the first one. They didn’t let us write a lot of the songs on the first album; we started writing and co-writing a little bit more on the second album. But we definitely picked the songs — from ‘I Do’ to ‘Invisible Man,’ ‘Hardest Thing,’ ‘Because of You,” we were receiving songs at a huge clip, sifted through all of them and we thought that those were hits.”

It took a long time for 98 Degrees to reunite and take another go at making music and performing live. The band decided to part ways in 2002, but it was always planned that they would get back together. When they made the announcement on their website back in 2002, Drew Lachey wrote that the band had not broken up, but rather was taking an extended hiatus. They got together a few times for one-time performances, first in 2004 to sing on Nick and Jessica’s Family Christmas TV special, again in 2005 to support Jeffre’s candidacy for mayor of Cincinnati, but things went quiet for the group until 2012 when the group revealed they would start recording for a new album. No one expected their hiatus to be over a decade-long! “I think everybody just got busy with life. We never expected the break to last this long. Then these guys got married and started having kids and then doing different projects. It’s a big commitment to come back together. You really have to set aside about a year maybe a year and a half. It’s something that the timing wasn’t right until now and also helped that pop music has come back around and atmosphere just seemed right and things [were] just meant to come together,” Justin Jeffre said. He also said getting back on stage was easy — it was just like riding a bike!

During the band’s hiatus, Jeff Timmons ran into a little legal trouble. He was arrested in April 2006 for drunken driving and driving without a valid license. Timmons was pulled over in Brevard, Florida while driving a white Mercedes. He was caught driving 60 mph in a 45-mph zone on his way home from a celebrity softball game. The police reports stated his eyes were glossy and he admitted to having “a lot to drink.” However, after the arrest, he seemed to change his tune and said he only drank two beers. His license at the time had expired in 2005 and was suspended. Timmons had two passengers in the car who were also very intoxicated. One of the passengers was Mitch English, the host of the syndicated TV show The Daily Buzz. He claimed Timmons was driving his car because he had too much to drink, according to police reports. Timmons was arrested, but released on a $500 bond.