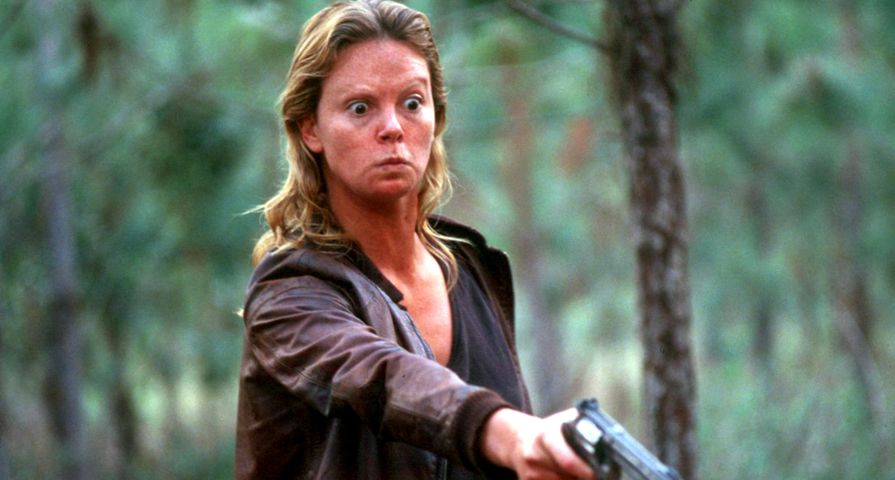 Criminals will always capture the public’s attention which is why their exploits make for great movies. It’s not unusual for male actors to take on the roles of nefarious figures – frankly, it’s a large chunk of what’s offered to film-lovers – but it’s not as often for a female actor to tackle (or even get a chance at) an intriguing criminal part. That’s what makes the women on this list and the roles they play that much more enticing. Here are 8 female stars who have played infamous criminals.

The true story of “The Hollywood Madam” spread across the tabloids like wildfire back in 1993 when the illegal escort business of Heidi Fleiss was broken up by Los Angeles police and countless celebrity names were implicated. Sex, money, and famous clients made for the perfect film fodder and The Sopranos actress Jamie-Lynn Sigler stepped into the role of the Madam mogul who rode high and then came crashing down as hard as they come in the 2004 TV movie Call Me: The Rise and Fall of Heidi Fleiss. It’s interesting to note though, that Ms. Fleiss did end up in prison, just like in the movie, but not for her escort business, but instead for income-tax evasion.

Laura Prepon took a drastic step away from her role as Donna on That 70’s Show when she took the part of true life killer Karla Homolka in 2006’s Karla. In a role that did nothing to appeal to audiences and frankly offended others, not to mention the fact that Prepon herself has come to regret the role, it’s only benefit for the actress may have been that it showcased another side of her acting abilities, which may have helped her land her latest hit part as the trouble-making, drug-dealing Alex Vause on Orange Is The New Black.

The true story of the “Long Island Lolita” captured the nation’s attention when teenaged Amy Fisher shot Mary Jo Buttafucco in an attempted murder after having an affair with the older woman’s husband. The story was outrageous enough to spark not only media attention, but also a film starring Alyssa Milano in the lead role of the made-for-TV 1993 film, “Casualties of Love: The Long Island Lolita Story.”

Alyssa Milano wasn’t the only actress to take on Amy Fisher. “The Amy Fisher Story” starred Drew Barrymore as the troubled teen caught up in an illicit affair and ending up attacking her lover’s unsuspecting wife. The duo films did nothing to deter audiences from checking them both out; however, good or bad the stories may have been, the stars and the scandal were enough to make them work.

One of the most famous female criminals of modern times is undoubtedly Bonnie of Bonnie and Clyde. The pair has become synonymous with romance-laced criminal rampages which, of course, will always pique the public’s interest. In 2013, Holliday Grainger stepped into the role of the 1930’s Bonnie Parker who went from a small-town waitress to infamous bank robber.

Before Holliday Grainger took on the role of Bonnie Parker, another actress had portrayed the famous female bank robber almost 50 years before. In 1967, Hollywood legend Faye Dunaway tackled the part in a version of the criminal events that was far more romanticized than the real life experiences of the famous fugitives who met gruesome and untimely deaths.

When Charlize Theron stepped in front of cameras as Aileen Wuornos, it was more than just a little shocking. The A-list actress who is well-known for her stunning good-looks was now leaving the audience stunned for an entirely different reason. “The actress, who had become pigeonholed in roles calling for a sexy blonde, had chopped and darkened her hair, made her blue eyes brown, gained 30lb and learned to speak with an unflattering dental prosthetic-induced overbite.” Making a drastic transformation in her appearance to look like the troubled female serial-killer, Charlize also morphed into the other woman so successfully that it earned her a Golden Globe and Academy Award for Best Actress.

A movie that hasn’t quite made it to theaters yet is sure to be one of the most interesting on this list. News was released to industry insiders announcing that Catherine Zeta-Jones, who played a drug lord’s wife in the 2000 movie Traffic, will take her own turn at the helm of the illegal trade when she portrays La Madrina. “The Godmother” Griselda Blanco ruled the Colombian cocaine drug cartel that flowed into the United States through Miami in the 1970’s and ’80’s. Known for her fabulous fortune and ruthless business style, she had no problem ordering the deaths of anyone and everyone who got in her way, including a few husbands, which also earned her the name the “Black Widow.” A formidable figure indeed, it will take a lot for Zeta-Jones to fulfill the role.