Fans of TLC quickly became attached to the Roloff family ever since the premiere of their reality series Little People Big World in March 2006. The series showcased the lives of parents Amy and Matt Roloff, who have dwarfism, and their kids Jeremy, Zach, Molly and Jacob, with Zach being their only child to also have dwarfism. Through 12 seasons fans have watched Zach go from a 16-year-old boy to a man with a family of his very own. Zach’s good-nature and quick humor instantly made him a fan favorite and now viewers have fallen in love with his family story with wife Tori and their new son Jackson! Despite being reality TV stars, there is still plenty to know about Zach and Tori and their endearing romance, so here are 10 things you didn’t know about Zach and Tori Roloff’s relationship:

Longtime fans of Little People Big World were aware of how often Zach’s father Matt said he should start dating, but Zach never seemed to have much interest. It wasn’t until Zach spotted Victoria Elizabeth Patton, aka Tori, that he thought of getting a girlfriend. “I’d never really dated before,” Zach told People of his single life before meeting Tori. That means Tori was not only his first girlfriend but also his first kiss!

When Tori Patton first appeared on Little People Big World, the relationship was poised as new and while fans were happy for Zach, his parents, Amy and Matt, were more skeptical about the relationship with Amy suggesting she thought Tori would break Zach’s heart. At the time, Zach simply gushed about their mutual interest in soccer, but in real-life, the two had been dating for months and it wasn’t soccer that brought them together. Tori was actually working on the Roloff family farm picking squash when she and Zach met. “A coworker told me, ‘Zachary really thinks you’re cute, but doesn’t think you’ll ever go out with him,'” Tori revealed. “Our first date lasted five hours and we’ve been together ever since,” she added of the beginning of their romance.

Since it took months after the pair began dating for Tori to appear on the show, fans weren’t clear about their relationship, and there were even rumors it was just for the show, but that couldn’t be any less true. The reason it took months for Tori to appear is that she wasn’t sure she even wanted to appear on reality TV despite dating Zach. “We’re such a unique pairing, and we have a really cool story to share, but it was terrifying. But the show has helped me realize I shouldn’t worry about what other people think,” Tori said of embracing being on Little People Big World. 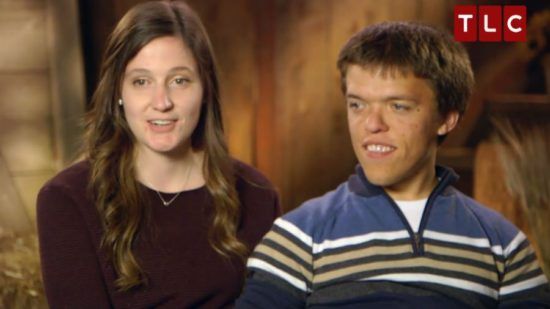 After three years of dating, Zach made the big move when he proposed to Tori on April 30, 2014, the day of their three year anniversary. Luckily, Zach’s brothers Jeremy and Jacob captured the adorable moment, which happened in a gorgeous open field. The pair immediately took to social media to share their news, with Zach posting, “She said yes! It’s been a brilliant 24 hours and totally excited for what the future holds.” Meanwhile, Tori wrote, “Words can not describe how much I love you. Saying I love you sometimes doesn’t even seem like it scratches the surface. You are the most amazing man, and I pray that I become the best wife to you, and do all in my power to make you happy. I love you FIANCE!!!”

After a year-long engagement, like so many others, Zach and Tori Roloff enjoyed a picturesque wedding on his family’s farm when they officially tied the knot on July 25, 2015. Fans of the series were not disappointed as the wedding was featured as a two hour special on TLC a month later, and although TLC camera crews were there, the couple tried to make the big day as intimate as possible. Although his brother’s wedding included more than 300 guests, Zach said he and Tori were not “spotlight people” and said their “I Dos” in front of about 185 guests. Tori looked stunning in a flowing off-white gown and Zach was handsome in a classic suit, and they revealed that Matt Roloff even went the extra mile to set up the perfect look for the day. “My parents played a huge role in setting up the farm, making it all nice,” Zach said while Tori added,  “Matt planted a bunch of wheat fields behind the gazebo. There’s like these huge rolling hills of wheat, which are really beautiful.” Although Zach joked it felt “different to wear a ring,” Tori sweetly stated, “We were always meant to be married. Now it’s just kind of more real.”

Following a year of wedded bliss, Zach and Tori announced they were expecting their first child with a very happy announcement in November 2016. While the pair had never talked about if they wanted to start a family soon or not, they already had a good idea about what their parenting styles were going to be. “I’ll be a fun, hands-on dad, but also the disciplinarian. Tori will be a loving mother hen,” Zach said. Of course, they knew there was a 50/50 chance of their child inheriting achondroplasia which is the most common form of dwarfism and the type of dwarfism that Zach has, but their only thought was being wonderful and loving parents. “We knew our chances of having a dwarf, but it didn’t matter. We just knew we wanted to be parents, however God wanted it to happen,” Tori said.

On May 12, 2017, Tori and Zach began their next big adventure when they welcomed their first child, son Jackson Kyle Roloff, into the world. It was a difficult decision for the two when it came to naming their little one, but luckily they found Jackson with Tori explaining, “We just liked the name. We couldn’t decide on boy names together and Jackson was like, literally, the only one we both liked.” Although the couple discovered at their 34-week ultrasound that their son was a little person like his dad, they didn’t feel the need to disclose the information. Now, the pair are happier than ever to be parents and Zach revealed that he hopes having faced his own challenges as a dwarf in childhood will help him be a better parent to Jackson. “I look at my childhood and being a boy on the farm, and it was a little tough because boys are very alpha-doggy and follow the pack. I was always chasing the back and way behind the pack,” Zach explained. “You have to encourage a dwarf child a little more because it will take them five steps to do what others can do in two. But I knew, dwarf or not, I was going to parent my child with the mentality that not everyone gets a trophy. You have to earn it.” Of her baby boy, Tori said, “I just pray that he is caring and thoughtful, like his father. I just want him to be a good person.”