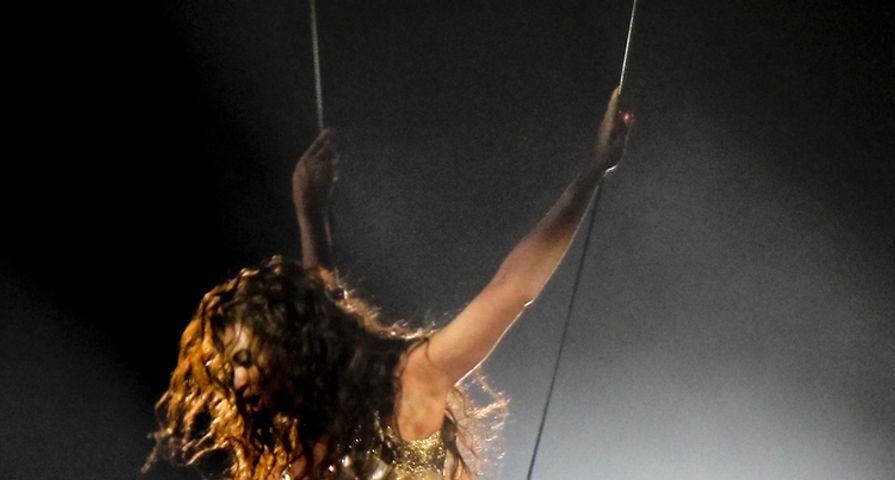 The Super Bowl halftime show is quite the gig. With 150 million people tuning in, it is one of the largest audiences that an artist or band will ever have the opportunity to perform for. It can totally make or break your career – just ask Janet Jackson! This weekend, the Super Bowl is back. Justin Timberlake will be taking the stage again. We are super excited to see him perform – he will definitely be the highlight of the event for us. In anticipation of the big day, we are going to rank the Super Bowl halftime performances – here are the 7 best and worst!

Shania Twain headlined the 2003 Super Bowl halftime show. She was in the midst of a mini-comeback at the time. She hadn’t released an album since 1997’s Come On Over and she had finally released an album a year earlier titled Up! She rocked the stage in a miniskirt, thigh-high boots, a bejeweled bra, a black cape and a ton of bling. Her confidence on stage was also remarkable. It was like she had never taken a break from the spotlight. Having No Doubt and Sting perform was also a great idea. Gwen Stefani brought a lot of great energy to her performance as well. She wore one of her trademark tummy tops and, along with her band No Doubt, they performed one of their biggest hits, “Just a Girl.” No doubt then left the stage, but Stefani stuck around to join Sting in singing the police hit, “Message in a Bottle.”

Madonna’s 2012 halftime performance broke the record for the most-watched Super Bowl halftime show in history; however, in our humble opinion, it wasn’t one of the better ones. The one thing that was really wrong with it was she didn’t seem completely on top of her game. Just a few minutes into the show, she lost her balance and almost fell as she performed “Music.” She kept going and acted like nothing had ever happened. Then, when she was performing “Give Me All Your Luvin” with M.I.A. and Nicki Minaj, M.I.A. made headlines for flashing her middle finger for a split second. We guess it isn’t a huge deal, but given how Nipplegate is forever etched into our memories, we wonder how people really felt about being flipped off.

Michael Jackson performed during halftime at the Super Bowl in 1993. His performance is actually what inspired the NFL to start signing top acts to appear during halftime. Apparently more people tuned in when they knew that he was going to perform. During previous halftime shows, other artists shared the stage or were preceded or followed by other performers. Jackson did not share the stage and he was the only act during halftime that year. The King of Pop began his performance by being catapulted onto the stage. He stood frozen for 90 seconds and then broke into his hit “Billie Jean,” then “Black and White” and then finally “Heal the World.” This was the first super bowl where the audience figures actually increased during the halftime show, which is a testament to Jackson’s star power. Even today, his performance is still seen as one of the most watched television broadcasts in American television history.

In 2011, the Black Eyed Peas took the stage during halftime at the Super Bowl. It wasn’t one of their better performances, although it did start out with a lot of promise. They descended from atop the stadium wearing Tron-esque costumes and jumped into their party anthem “I gotta Feeling.” It should have been an electric performance, but everything was off. They all seemed tense and tentative and Fergie’s mic didn’t even kick in until halfway through her first verse. With the Tron theme, one would think that the NFL would have chosen an electronic music band like Daft Punk to perform. The only redeeming thing about this Super Bowl halftime performance was Usher. He probably should have been the one headlining the event, but that’s beside the point. He gave the halftime show a jolt of the much-needed energy that it was missing.

In 2001, NSYNC took the stage alongside Aerosmith, Mary J. Blige, Nelly and Britney Spears. It was definitely one of the better halftime performances. N’Sync kicked things off with their hit single “Bye Bye Bye” and were followed by Aerosmith singing “I Don’t Want to Miss a Thing.” NSYNC then sang “It’s Gonna Be Me” with Aerosmith following with “Jaded.” Then everyone, including Mary J. Blige, Britney Spears, and Nelly, joined them on stage and sang along to Aerosmith’s hit “Walk This Way.” N’Sync were on top of the world at that point and so was Spears. She could have headlined this event and it is surprising that she wasn’t asked to do so. If you are going to remember Spears, it is best to remember her exactly as she was in 2001 – with her rock hard body, her glowing skin and her cute little tummy tops. Also, how cute was her outfit?

If it weren’t for the infamous wardrobe malfunction that occurred during Justin Timberlake and Janet Jackson’s halftime performance, people may have looked back on this halftime show with very different feelings; however, that’s impossible now given all of the controversy that has been tied up in it. Naturally, the whole thing was staged. Both parties willingly took part in it; however, Jackson’s breast being exposed wasn’t reportedly part of the plan. Timberlake was supposed to rip off part of her costume, but leave her red, lace bra in place. We suppose he pulled a little too hard cause everything came off except for her pasty. While both of them apologized, only one of them was really forgiven. Timberlake moved on from the scandal practically unscathed while Jackson’s career was more or less ruined. Her next album flopped and she was practically blacklisted in Hollywood as a result. We really haven’t heard much from her since.

Beyonce’s halftime show at the Super Bowl in 2013 was pretty fierce; however, she wasn’t able to beat Madonna’s ratings from the year before. Unlike the Queen of Pop, Beyonce didn’t have to share the stage with several other artists. Instead, the other members of Destiny’s Child Kelly Rowland and Michelle Williams joined her on stage. They performed “Bootylicious,” Independent Women Part I” and a new version of Beyonce’s hit “Single Ladies.” We think this was the best of the Super Bowl performances and we have the critics on our side. They believe that she proved her abilities as a performer. Jon Caramanica of The New York Times praised the performance, writing, “For 12 or so minutes…she balanced explosions and humanity, imperiousness with warmth, an arena-ready sense of scale with a microscopic approach to the details of her vocals. Amid all the loudness were small things to indicate Beyoncé was answering her skeptics, quietly but effectively,” he wrote. It was definitely one of her best.