5 Reasons You Need To Watch ‘Sunshine On Leith’ 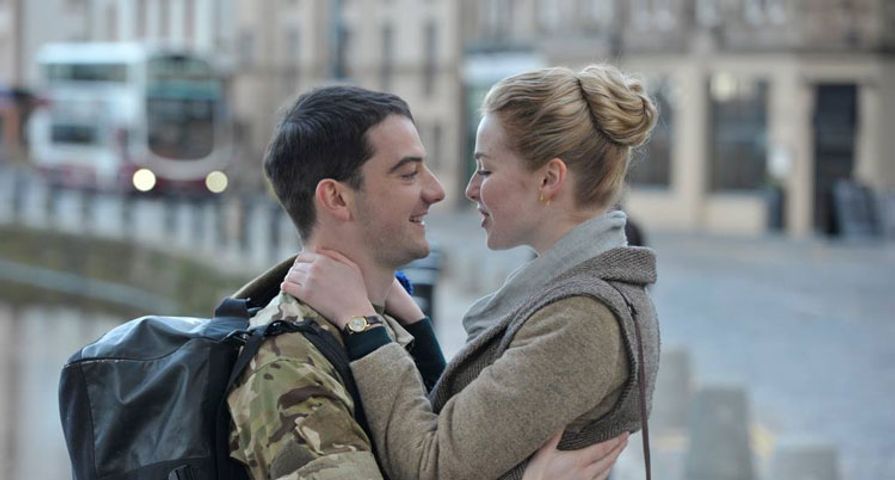 Sunshine on Leith, the critically acclaimed Scottish musical featuring songs by the The Proclaimers, is now available on iTunes, and if you haven’t heard of it this is a great chance to check it out. In the ever growing musical genre, Sunshine on Leith stands out with an excellent combination of perfect story-telling, music and casting to bring together the story of war, home, family and love. After premiering at the 2013 Toronto International Film Festival, the musical took the No. 2 spot at the UK box office, receiving extremely positive reviews.  Adapted by director Dexter Fletcher from the stage musical hit of the same name, there are many reasons to see this film, here are five of them.

Even if you don’t know who The Proclaimers are by name, we are willing to bet that you have tapped your foot to their famously catchy tune “500 Miles.” Sunshine on Leith, named after the 1988 studio album by The Proclaimers, is the ultimate way to experience their music as the entire musical is based on tracks by the group. Identical twin brothers Charlie and Craig Reid hail from Leith, Edinburgh, Scotland and are still touring the world extensively. Sunshine on Leith includes 14 tracks from the group beginning with “Sky Takes the Soul,” and ending with the iconic “I’m Gonna Be (500 Miles).” The duo even make a brief cameo in the film. Watch for them at the beginning as the two men whom Davy and Ally nearly bump into while singing “I’m On My Way.”

While a lot of films and stories focus on families being torn apart by war as soldiers leave and cities are destroyed, Sunshine on Leith gives a fresh perspective of the families trying to re-adjust after their loved ones return home. Soldiers Davy and Ally return home to Edinburgh after serving in Afghanistan and both struggle with settling back into the lives they left behind and the everyday struggles of family, jobs and relationships. Not only is Sunshine on Leith a stand-apart film from the musical genre, its story shines compared to many cinematic ventures which hits home with audiences. One critic wrote, “I shed a tear within the first 10 minutes, and spent the rest of the movie beaming like a gibbering, love-struck fool.”

Of course, even the best stories need a cast to fulfill their potential and as can be expected the cast of Sunshine on Leith was put together brilliantly to bring the musical film to life. George McKay and Kevin Guthrie star as Davy and Ally while Freya Mavor and Antonia Thomas star as their love interests Liz and Yvonne. Iconic actor Peter Mullan also stars as Robert “Rab” Henshaw. Mullan is a very well recognized Scottish actor and filmmaker and winner of the Best Actor Award at the 1998 Cannes Film Festival. He is currently working on the highly-anticipated live-action Disney film Jungle Book: Origins in which he plays Akela.

With a film as highly rated and well received as Sunshine on Leith, it shouldn’t be surprising that it appeals to a very wide audience – something that many films, let alone musicals, can attest to. As Cameron Williams from the Popcorn Junkie put it aptly, “It’s pleasant. It will provoke a smile. Take your grandma.” While another critic applied it as the musical of a generation, “[Fletcher’s] adaptation of the hit stage play is to Scottish audiences as Mamma Mia! is to The Me Generation and Rock of Ages is to Gen X-ers.” Even better it has opened up the audience for the music of The Proclaimers as they stated in an interview following the film’s success, “We get a lot of people at gigs who would never normally come see The Proclaimers or even go to a concert. A lot of people who watch musicals, older people and children have got into what we’re doing […] we’ll have the biggest crowds we’ve ever played to and the film has definitely had an impact on that.”

Don’t take our word for it – the critics love it, too! ‘Sunshine on Leith’ currently has a 92% fresh rating on popular film review site Rotten Tomatoes. Paul Brynes of the Sydney Morning Herald says, “The flash mob finale, with what looks like 500 dancing Edinburghers, is about the most fun I’ve had in a cinema this year.” With an industry that is currently churning out the same thing with a different look, the reviews from both critics and audiences prove that this unique film is something everyone not only needs but wants.

You can watch Sunshine on Leith on iTunes – let us know what you think of the film in the comments box below!