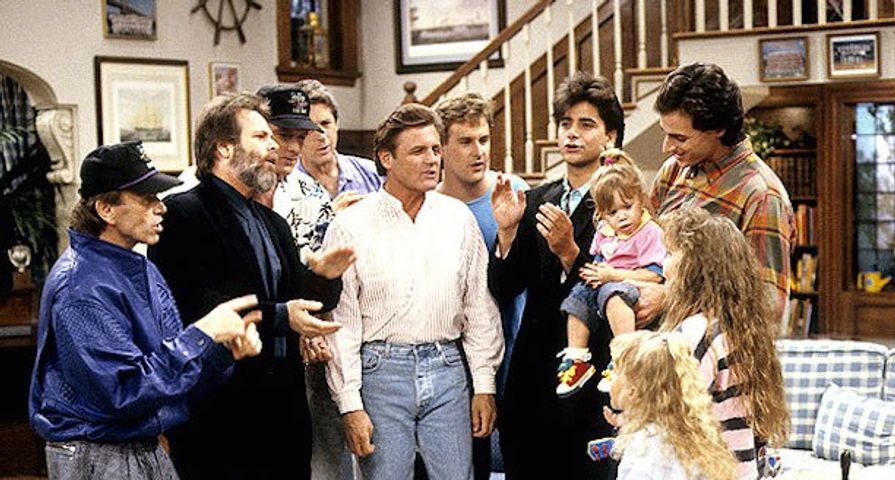 The coming of age sitcom known as Full House is one of the most beloved shows from the ’90s. While it was never popular among critics, it had a huge fan following, and still does to this day. Throughout all eight seasons, Full House had some pretty amazing celebrity guest appearances. Many of their guests were already famous in their own right, from musicians to professional athletes and other actors, while others weren’t famous at the time, but went on to become big stars! It’s impossible to name them all, but here’s a quick look at 15 celebrities who once guest starred on Full House!

The lead singer of The Four Seasons, Frankie Valli, shows up on Full House to do a quick performance, but not in front of his usual crowd. In the 1995 episode, “D.J.’s Choice,” both Nelson and Viper are competing for D.J.’s heart. In order to win her over, Nelson hires Valli to serenade her.

The hugely famous film and television actor and Broadway star, Mickey Rooney, showed up in a holiday special episode on Full House. Rooney was one of the last living silent film actors when he passed away in 2014. He was such a popular actor, it’s nearly impossible to name all that he was famous for at the time of his cameo, but when he showed up in season 8 of Full House back in 1994, he played a novelty store owner who sold Michelle an ugly tie which she gives to Danny as a Christmas gift.

Full House producers didn’t have to look far while casting for the first season. They chose Candace Cameron’s older brother, Kirk Cameron to play Cousin Steve in the episode, “Just One of the Guys.” Both siblings are equally famous for their roles on popular sitcoms, but after this cameo, Cameron’s fame rose even more after receiving two Golden Globe nominations for his performance in Growing Pains.

The Everybody Loves Raymond actress, Doris Roberts, guest starred on Full House in season 3 as Danny Tanner’s mother, Claire Tanner, in the episode “Granny Tanny.” During the episode, she comes to visit the Tanner family and tries to convince them to let her move in. This appearance was before she rose to fame as Marie Barone in Everybody Loves Raymond, but she was still well known for her many previous roles on television and in film.

The ’90s were the peak of Danielle Fishel’s career. She’s best known now as Topanga from Boy Meets World (and Girl Meets World), but when she appeared on Full House, she played the character of Jennifer, one of the popular girls in Stephanie’s class who pressured her to get her ears pierced. Fishel showed up in two episodes on Full House in 1992 and ’93. Not long after her cameo, she landed her main role on ABC’s hugely popular Boy Meets World in 1993.

In the ’90s, Jaleel White was a huge star. He played Steve Urkel on Family Matters from 1989 to 1998. In 1991, he made a guest appearance on Full House in the crossover episode, “Stephanie Gets Framed.” He comes on Full House as the cousin of one of DJ’s friends, but in the character of Steve Urkel! It’s an unsuspecting crossover between two sitcoms, but totally amazing. He’s seen dancing in the living room with Uncle Jesse and then provides a shoulder to cry on for Stephanie after she gets a new pair of glasses that she hates.

Back in the ’90s on Full House, she was known as the bad girl, Stephanie’s cigarette-smoking, crop top wearing, school skipping best friend named Gia. She held a recurring role on the show from 1993 to 1995, appearing in a total of eight episodes. She wasn’t famous during this time, but since then she’s gone on to have quite the impressive television career. She’s held notable roles on The Practice, Desperate Housewives, Party of Five, Big Day and The Fosters. Fans got to see what her character is up to now in her guest appearance on Fuller House in the episode “Girl Talk!”

Scott Baio showed up on Full House in the character of Pete, an old friend of Jesse’s who came pretty close to convincing Jesse to ride his motorcycle on the ledge of a parking garage. Luckily, Jesse had changed a lot from his days as Pete’s old buddy and he doesn’t go through with it. Baio’s cameo came in the late ’80s while he was still riding the wave of fame from his roles in Happy Days as Chachi Arcola and Joanie Loves Chachi.

The late Phyllis Diller made a guest cameo on Full House back in 1988 during season 1 in the episode, “But Seriously Folks.” The actress and stand-up comedian appeared as herself as she took over a comedy set originally intended for Joey. When Joey takes the stage after her, he completely bombs because the audience is all laughed-out from Diller’s performance. Her appearance on Full House was surprising, but one of the best.

Suzanne Somer’s cameo on Full House was very brief as she came in to use the pay phone after Steve and ended up causing drama in his relationship with D.J. In the episode “Love on the Rocks” in season 7; the Three’s Company actress approaches Steve to ask if she can make a call while he’s using the payphone.

The Wheel Of Fortune star showed up on Full House in season 7 as herself in DJ’s dream. It was the day before D.J.’s SATs and she was so nervous about failing that she has a nightmare featuring Vanna White. In the dream, White spells out the names of universities that correspond with the students results. Because of her nightmare, D.J. oversleeps and is late to her test. She ends up writing the exam in her pajamas and pink bunny slippers.

Another star who appeared as himself on Full House is NBA player, Kareem Abdul-Jabbar. In the episode “Air Jesse” in season 8, Abdul-Jabbar shows up at the high school’s fundraiser celebrity basketball game and acts as the celebrity referee for the game. Of course, the not-so-athletic Jesse has no idea who he is. He ends up giving some pointers to Jesse who then goes on to score the winning shot.

According to the Huffington Post, Little Richard was one of Full House‘s most high-profile guest stars! His cameo was definitely more exciting to the adults watching Full House than the young viewers. He appeared in the episode “Too Little Richard Too Late” as Denise’s uncle, who just so happened to be holding a concert in San Francisco when he lends his celebrity status to Joey’s campaign for PTA president at Michelle’s school and performs at an election rally.

How could anyone forget The Beach Boys cameo in Full House! The Beach Boys were Jesse’s idols and John Stamos is rumored to have occasionally played with the band in concert, so it’s no surprise they were invited to do a celebrity guest appearance on the show. They appeared in the episode “Beach Boy Bingo” in season 2 when Danny Tanner has them on his radio show and D.J. wins tickets to their upcoming concert.