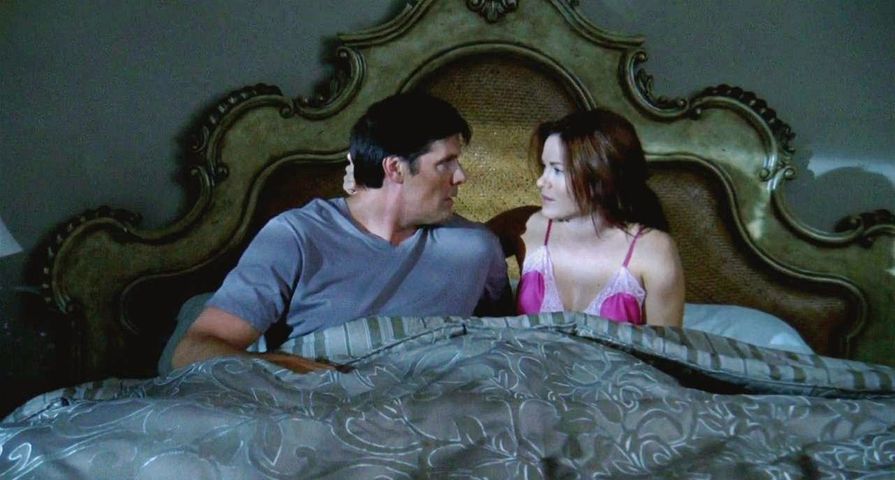 Every TV drama has one or several major romances at the center of almost every storyline, and these relationships are often what keeps viewers intrigued and the drama rolling. It is always the plan for producers to get fans to love a certain couple, but no couple can make it through without breakups and obstacles, often involving someone else fans know they shouldn’t be with. These couplings may have infuriated fans, but they also provided some great storylines and developments in the characters, so while it doesn’t necessarily mean they didn’t have chemistry or weren’t that great together, here are some TV couples fans definitely loved to hate! Check it out:

Friends was a masterpiece for 10 incredible seasons, but that doesn’t mean it didn’t have some rough patches. Over the course of the series each character had their fair share of failed relationships, yet one that still makes fans cringe is Joey and Rachel. While many may not have wanted Ross and Rachel together, they at least had way more chemistry than Rachel and Joey. The whole story arc was almost hard to watch but also impossible to turn away from, because fans just wanted to know when it was going to end! More than a decade after the finale, fans still love to hate Joey and Rachel together.

10 New TV Shows You Need to Watch This Fall

12. Nathan and Peyton – One Tree Hill

Overall, One Tree Hill fans really didn’t get to see too much of Nathan Scott and Peyton Sawyer actually together. The series opened with the pair fighting and clearly not having anything in common, and it quickly became evident that Peyton and Lucas were the two to root for. Of course, it helped that at this point in the series Nathan was framed as the villain and was easy to hate all on his own. Since Nathan and Peyton provided the drama that not only led into Peyton and Lucas beginning their romance, but also the conflict between Nathan and Lucas, fans loved to hate them.

Even though The O.C. only lasted four seasons, and she was only in the series for three, that was plenty of time for Marissa Cooper to have many intense relationships. While some fans loved some of Marissa’s relationships, one that they could not get behind was her hookup with the O.C.’s resident bad-boy Kevin Volchuk. The fact Marissa even began a relationship with someone who had not only continuously tried to fight and hurt Ryan, but had also kidnapped her, was absolutely unbelievable to fans, but that also made the coupling all the more intriguing. Volchuk was the perfect antagonist already making him a character that fans loved to hate, and at that point in the series, many fans also couldn’t stand Marissa anymore so when they got together it was very easy for fans to root against them.

The 12 Most Iconic TV Couples Of Our Time

Viewers endured many different couplings through Glee’s six seasons and one pairing they couldn’t get enough of — for all the wrong reasons — was Finn Hudson and Quinn Fabray. Immediately fans were not into the stereotypical quarterback-cheerleader romance, and then of course they just knew that Finn deserved so much better! They pair may have been hated together, but fans couldn’t look away as Quinn kept the drama coming with the baby controversy and, of course, the cheating scandal with Finn’s best friend.

Individually, Derek and Addison were two of Grey’s Anatomy’s most powerful characters, but together it was a disaster that helped cultivate Grey’s into one of the most successful series of recent TV history. When Addison made her entrance into the show, everyone was already for rooting Meredith and Derek which automatically made Addison the villain. It didn’t take long for fans to turn on Derek as well, as he continued to play games between Addison and Derek, which made the first two seasons incredible, but also made them extremely hated as Meredith’s heart was broken.

8. Caroline and Stefan – The Vampire Diaries

By the time Caroline and Stefan got together on The Vampire Diaries, fans had already seen them in such great relationships that when they got together it simply seemed as if all other options had run out. Compared to Caroline with Tyler or even with Matt, and Stefan with Elena, fans couldn’t help but hate the pair when they started dating. Fans knew they wouldn’t last, but still enjoyed hating them together and waiting to see what would be the catalyst for the breakup.

7 Great Shows That Should've Ended Sooner Than They Did

Friday Night Lights is one of the most critically acclaimed teen dramas of recent years and had a fantastic cast and great storylines, not to mention many romances. While some couples were obviously easy to love, some others did not resonate with fans and one of those was Tim Riggins with Lyla Garrity. The fact that they began hooking up while Lyla was still with Jason and while he was still in the hospital after suffering a life-changing injury from football made it very easy to hate the couple. At the same time, however, they provided drama, intrigue and a new element to the story which kept throwing new twists at viewers.

6. Lucas and Lindsey – One Tree Hill

One Tree Hill fans didn’t know what was going to happen, or what they were going to miss, when the series skipped four years in between seasons four and five. Needless to say they were definitely not prepared for when they left off season four with Peyton and Lucas together only to find them not only broken up, but Lucas in love with his book editor Lindsey. To not have Lucas and Peyton together was enough to make viewers mad, but to have it sprung on them made it even worse. Even though Lucas and Lindsey seemed truly in love and had a great relationship, fans loved to hate them because they knew no matter how close it came to the two actually getting married, it couldn’t happen because Lucas was meant to be with Peyton.

5. Katherine and Damon – The Vampire Diaries

To be a fan of The Vampires Diaries meant you had to have lots of patience as your favorite characters went through some strange and problematic storylines and relationships, and that patience was greatly tested with the romance between Katherine Pierce and Damon Salvatore. While the Katherine storyline definitely added a lot to the show, fans also couldn’t get enough of hating on Katherine and Damon. In all other aspects, Damon was a strong, cool character, but when it came to Katherine, he was weak, and it most definitely rubbed fans the wrong way.

4. Carrie and Petrovsky – Sex and the City

Sex and the City fans saw quite a few different relationships for all the leading women, and while some were great, and others were more or less insignificant, there were a few that were despised. Right from the beginning, Carrie’s relationship with Aleksandr Petrovsky was a little odd because of the age difference, but it became evident early he was a bit too cold and mature for Carrie. The romance was definitely exciting because of Petrovsky’s wealth and lifestyle which convinced Carrie to leave her beloved New York and move to Paris, but after such great romances with Aidan and Big, it wasn’t difficult for fans to hate on the Carrie and Petrovsky coupling, but enjoy the excitement it brought to the show in season six.

When a teen drama goes on for long enough, it becomes evident when writers have run out of material for central couples, and in the end every main character ends up dating each other, and that was exactly the point Gossip Girl was at when Dan and Blair started dating. The pair were the most unexpected couple in the series, and it was evident their storyline was just a product of the fact they were both single and was there to shake things up a bit. Fans knew they were not meant to be together, and had no problem criticizing the relationship with the knowledge that there was no way it was going to last. But it was something different, and it was interesting to see what drama it would bring.

11 Shows That Survived After Killing Off A Main Character

Even though it has now been several seasons since either George or Izzie were featured as a major character on Grey’s Anatomy, this disastrous romance is forever ingrained in the minds of fans. The lead-up to this relationship was exciting and fun, but it ended up being everything other than what fans imagined. Together, they were laughably awkward, and there was zero passion between the two, but most of all fans loved to hate them because it was all a bad idea right from the start considering George’s marriage to Callie. Needless to say the awkward fling was not worth losing his relationship with Callie.

While fans may have warmed up to Rachel during her time in Tree Hill, there was no love lost for Dan Scott and following his release from prison they definitely didn’t need any more reason to like him even less. Creating a creepy power couple with Rachel Gatina and Dan Scott on One Tree Hill was a bold, yet epic, move from producers because, while fans cringed at their relationship, they also couldn’t look away. Dan and Rachel was a fantastic twist in the series, and the combination of both villains made for the perfect TV couple that was very easy to hate, but fans loved every minute of it.