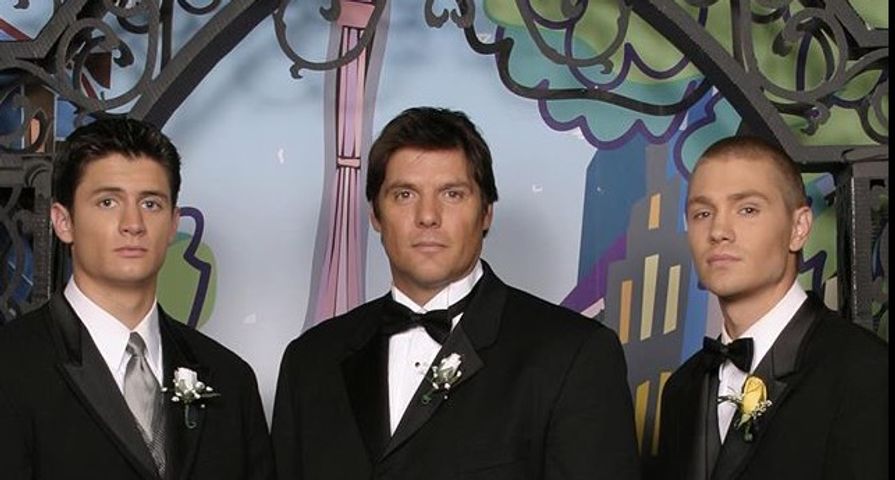 A lot of TV series focus on the bond between a mother and their child, but there are a few that give attention to the relationship between a father and child. TV fans have seen every possible imagining of a dad on popular TV series from amazing dads to absolutely horrible ones. From some our favorite TV dads to some of the most hated, here are some of the best and worst TV dads (and some that fall somewhere in between) from a few of the most popular TV series of recent years:

Sandy Cohen is one of the most iconic TV dads from any hit teen series. He was charming, understanding and the best at the classic “dad joke,” all while being hard-working and completely devoted to his family. While Seth Cohen was his biological son, his dad genes were so strong he was even a great father to Ryan Atwood after bringing him home in an effort to help the wayward Chino teen on The O.C. The lengths Sandy would go to to help anyone was extensive, but his love truly knew no bounds when it came to his family, and he was always there to help and support Seth even though he wasn’t like the other O.C. kids and, most importantly, was always there in the best and worst of times for both of the boys.

There is absolutely no doubt that when it comes to some of the greatest TV characters of recent years, Coach Taylor would have to be near the top of the list, but the same can’t be said for best TV dads. Eric Taylor was a loving family man without question, but it can’t be denied that a lot of his time and attention was always focused on football and the football team he was coaching. Not to mention his own daughter Julie Taylor ended up being the worst character on the series, so much of his wisdom and tender moments of understanding were actually saved for his players and his wife instead of his own children.

Cameron Tucker and Mitchell Pritchett are fun, hilarious and loving but also responsible and careful when it comes to raising their adopted daughter Lily. While they are far from perfect parents, there is never any doubt that they will always do everything in their power to do the best thing possible for Lily. Even though Mitchell’s work kept him from missing many of her milestones early in her life, he made the decision to put fatherhood and Lily first by quitting his job. While she might be sassy, she comes by it honestly with Cameron for a dad, and between Mitchell and Cameron, Lily has the best balance of drama, fun, seriousness and responsibility and, of course, never-ending love.

There is no doubt that Marissa Cooper wasn’t the easiest character to like on The O.C., but unfortunately a lot of her behavior problems can be focused back on her parents including her dad, Jimmy Cooper. Although it seemed as though he had good intentions, in the end Jimmy made some really horrible decisions such as stealing from clients and leaving town that ended up seriously affecting his children. With Julie Cooper not winning any mom of the year awards, Marissa really needed her dad, but he was too wrapped up in his shady business deals to ever give her the love and attention she needed.

Although it is easy to take sides on hating or loving some TV dads, others are harder to label. When a series goes on long enough, fans see the characters in many different situations and often they see different sides to a character they thought they knew. When it comes to Gossip Girl, at first Rufus seemed like the ideal dad. He was young, cool and relatable but knew when to be the authority and be more of a dad than a friend to Dan and Jenny Humphrey. Despite his best intentions that doesn’t change the fact that he left his children for an entire summer to go on tour with his band to try to escape his romantic problems. Not to mention that under his care, Jenny drastically changed and became selfish and reckless to the point where she couldn’t even live with him anymore and had to move to Hudson to live with her mother. Then of course there was the fact that Rufus went ahead and dated Lily even though his son, Dan, was dating Lily’s daughter, Serena, first which was not the best dad move.

Since Riverdale is still new, fans don’t know Fred Andrews as well as some of the other dads on this list, but he certainly seems like a great guy. As a single dad to Archie after Archie’s mother left, Fred has balanced working to support himself and his son, and being there for Archie the best way he knows how and, although there seems to be a lot of pizza dinners in the Andrews household, Archie and Fred have an amazing bond. What solidifies Fred as one of the best TV dads is that, even though he dreamed for his son to be a football star and then take over his construction business, he never stood in the way of Archie’s own dreams of pursuing music. Just when it seemed the conflict in what was best for Archie’s future was going to come to a head, Fred went ahead and renovated and soundproofed his entire shed so that Archie would have an entire space to work on his music. It was definitely an incredible dad moment, and it can’t go unmentioned that his fathering qualities extend out to Archie’s best friend Jughead as Fred took him in when it was discovered that Jughead was homeless.

Bart Bass may have had some gentle moments on Gossip Girl, but for the most part his attitude and treatment of his son Chuck definitely puts him as one of TV’s worst dads. It became evident very quickly that there was little love between Chuck and Bart despite the fact that Chuck’s mother had passed away and Bart was all he had. For the most part, Bart seemed to regard his son as lazy and ignorant and not willing to take responsibility or work for anything. When Chuck did make any attempt to form a father-son bond, Bart always rejected it and pushed Chuck further away. While things may have started off rocky between the two, by the end of the series they had devolved into enemies, with Bart faking his own death, double-crossing Chuck countless times, kidnapping Blair and even finally attempting to kill his own son.

It is hard to properly place Jax Teller as a father because very few scenes actually focus on him parenting his sons. Sons of Anarchy was predicated on father-son relationships and, although Abel and Thomas were so young, the entire series focused on Jax trying to get out of the gang lifestyle for his sons, but never being able to escape, much like his own father. Although Jax loved both of his sons fiercely and did everything he could to protect them from his own dangerous lifestyle, in the end they were left without their father, and Thomas’s mother Tara because of Jax and his deep involvement with SAMCRO.

Few TV dads have been as entertaining as Red Forman on That ’70s Show. As a war veteran and blue-collar guy, Red values respect, hardwork, loyalty and being tough, all of which he continuously tried to instill in his son Eric while doting on his daughter Laurie. Although Red and Eric’s relationship seemed strained and Red continuously called him a “dumba–” it all comes from a place of tough love, and the only way Red knows how to show affection to his son. Although he put on a tough exterior and seemed to enjoy being feared, he sometimes let his guard down and revealed how much he cared not only about Eric and Laurie but about Eric’s friends as well, taking it upon himself to give them guidance and advice and keep them in check.

Veronica Mars may not have had the long run that fans wished for, but it went on long enough for Aaron Echolls to be firmly placed as TV’s worst dad. Through the course of the series, viewers learned that Aaron beat his own son Logan and beat his wife until she eventually committed suicide after a scandal involving Aaron and another woman came to light. If that isn’t bad enough there is also the fact that Aaron was having an affair with Logan’s girlfriend Lily, but murdered her in a fit of a rage.

There is just so much to say about One Tree Hill‘s Dan Scott, and there are many arguments that would definitely qualify him as one of the worst TV dads ever, but it isn’t that simple. Although at first Dan Scott, was nothing short of a villain, eventually he became a man that it was hard not to love. At first he abandoned his first son Lucas Scott and Lucas’s mother Karen entirely when he discovered that he had gotten his college girlfriend pregnant only a few months after Karen. While he was awful for abandoning Lucas and making it known he thought he was a mistake, it wasn’t much better for the son he decided to care for as he mentally abused Nathan, who eventually emancipated himself because he couldn’t take it anymore. As time went on Dan’s fathering qualities finally came out and even fans came around to him. Despite his horrendous actions in the early seasons, he was able to rectify his relationship with Lucas to an extent and by the end stopped at nothing to ensure the safety of Nathan and his grandson Jamie. He went on a rampage in order to save Nathan from his Russian kidnappers, and the end of the series made Dan’s redemption clear when he died and the ghost of his brother Keith, whom he murdered, came to welcome him to Heaven.

Phil Dunphy may be the king of the “dad joke” and come off as clumsy and oblivious, but at the end of the day he is a truly amazing dad to Haley, Alex and Luke on Modern Family. Despite having three extremely different children, Phil is able to understand and help them in whatever way they need which is helped by his “peerenting,” which is acting like a parent but talking like a peer.