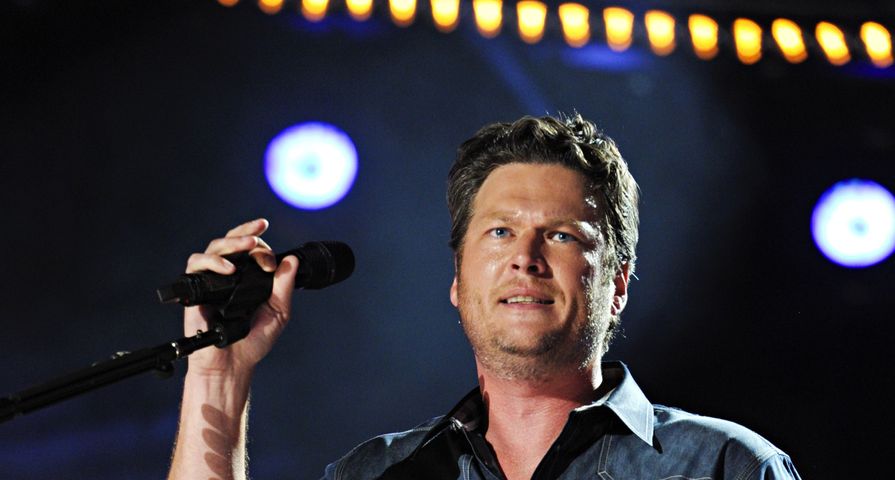 Blake Shelton. He’s a unifying and divisive source. There’s no doubting this guy’s prowess when it comes to success in the entertainment industry. He’s tall, dark and handsome, charming… and controversial. These days, it helps to be a little controversial, especially when you’re “misunderstood” like Blake. Isn’t it strange that everything he does to stir up controversy is just another misunderstanding, or people jumping to conclusions about what the meant? Let’s not infer too much with Blake. He’s a simple, country fella. Yeah, right. Here are 10 of his biggest controversies.

As mentioned, Blake can serve as a unifying force, and he’s one of those spotlight characters who will draw all kinds of attention for engaging a group like Westboro Baptist Church. For those who have been under a rock, The Westboro group offers an interesting take on church, as they provide educations of hate to their congregants, and then send them into the world to spread their hateful message. In 2013, the group decided to direct their ire at Blake Shelton, and while many people choose to ignore WBC when they spit some conjecture, that’s not really Blake’s style. Announcing that they were planning to picket Blake, the country star and judge on NBC’s The Voice, he responded with his own tweet that was a little less than friendly. “Hey WBC.. I’ve got one more sin for ya… B— me.”

Way back in 2011, Blake took to Twitter to offer what he believed was new lyrics for Shania Twain’s “Any Man of Mine.” The lyrics included a virtual beat down who was creepin’. Of course, people read way too far into this, and suggested that Blake was writing these lyrics from his own perspective. Suggesting that any gay man who might hit on him would be literally hit on with fists. Again, people…don’t infer too much with Blake. It’s an exercise in futility. Blake woke up to a rash of “WTF” from the Twittersphere, and stuck by his guns. He liked his new, face-pounding lyrics. It was only later that someone explained to him: “people think you offered those lyrics from your perspective…not for Shania.” Blake took his a-ha moment to Twitter, and explained himself, and all was forgiven. It’s such a wonderful time to be alive…everything is so offensive.

Blake really put a boot in his mouth when he made a few comments about new country vs. old country, and he offended legendary country artist, Ray Price. If Blake had been a little wiser with his words, he’d have likely avoided words like “old fart” and “jackass,” but we understood his point. He was simply suggesting that country has changed, and has had to change in order to remain viable in the entertainment marketplace. That said, his manner of saying it was rather obtuse, and he also suggested that no one wants to listen to their “grandpa’s” music. And… if Johnny Cash is grandpas music, Blake is dead wrong. Ray Price took exception to Blake, and put the little whipper snapper in the corner. Blake responded with an apology, and offered nothing but praise for country legends like Price.

Remember when American Sniper hit theaters less than a year ago, and it was enormously popular? Even more popular than the industry predicted? And everyone immediately became offended, and began calling it a war propaganda film without actually seeing it? That rubbed Blake the wrong way. Had Blake seen the movie? No. Not yet. But according to his Twitter counterattack, he didn’t really care much for the people slamming the movie–who also hadn’t seen it. For the most part, we’re talking vocal celebs like Seth Rogen and Michael Moore. Blake referred to individuals who discount soldiers as being #truecowards, because they’re dissing the very people who preserve their right to talk s***. Damn. It’d be awesome if things were really so black and white. Blake later admitted that he may have been a bit tipsy for his tweet. We’ll never know if he actually saw the movie, but he probably did.

6. He’s Got a Thing For Gwen Stefani

These rumors started flying the moment it was announced that Blake Shelton and Miranda Lambert were divorcing. That’s because Gwen Stefani announced shortly thereafter that she and Gavin Rossdale would be ending their marriage as well. At FAME10, we went so far as to suggest that Gwen might turn to her fellow judge from The Voice for a little rebound romance. Yes, there have been reports of flirtatious and romantic behavior shared by Blake and Gwen, but Gwen going from one guy who was alleged to be unfaithful on a consistent basis to another guy who has a reputation for a wandering eye…? Yeah. More than likely, the two just love the attention of each other. It has annoyed some people that Blake might have a little something for Gwen following his divorce, but what heterosexual male doesn’t have a thing for Gwen?

5. His Incessant Picking on Chris Young

Chris Young probably has a love/hate relationship with Blake Shelton. We all know he has to love Blake’s constant trolling, remarks, jokes, nudges… that is free publicity, and you’re basically being treated like the little brother of country’s biggest male star. The flip side: it pulled Chris into the divorce trial led by the media, as many speculated that Chris and Miranda had an affair, and that was the final blow to the star couple’s marriage. When Blake first started picking on Chris Young, people didn’t get it. It stirred the pot. People soon understood that the two are friends, and there was nothing but love in the Twitter trolling… but then to be accused of breaking up someone’s marriage? That was a bit more than Chris or his publicity team were hoping for. That goes way beyond the realm of entertainment.

“Remember that time…” Why do we suppose that so many stories about Blake Shelton between Blake’s friends begin with that line? But seriously…remember that time Blake sent Adam Levine’s cellphone number out to the masses via Twitter? He threatened to do it, and Adam called it a bluff. Blake did as he said he would, and sent it out…to the world. How many people tried calling? It might be easier to take a poll of people who didn’t…Let’s discuss this, shall we? What do you do if you’re Adam Levine, or any celebrity for that matter, and your cellphone number becomes public knowledge? There’s no salvaging that number, is there? And the text messages that would flood in…? Wouldn’t it make your phone melt? As you’d suspect, Adam had to change his phone number, confirming Blake did send out the real deal.

Maybe it’s time we take a page from Blake’s book, and call it like it is. A lot of Blake’s tweets spark some kind of controversy. They may be mini-controversies steeped in cryptic text speech, but there’s usually some nugget of controversial gold in the mix. Regarding this list alone, 50 percent of it is related to Blake’s Twitter activity. We could have gone whole hog–to use a term he’d appreciate–and focus on his Twitter gaffes, but we need to offer a little variety for the sake of sanity. So. What controversy will come next for Blake on Twitter? We’re not 100 percent sure, but we’re pretty confident it will be the result of Blake having ingested a little too much alcohol. And, then, down the line, there will be the inevitable, “I’m going to rehab for alcohol” tweet that will generate even more buzz, and spark more controversy.

2. Rumors of His Infidelity

How many times did fans endure the tabloid cover claiming Blake Shelton and Miranda Lambert were going to split? In terms of stories that were written, rumors that were cycled, and recycled…it was a quarterly thing. Blake and Miranda always squashed the rumors, but when stripping that relationship down to its figurative brass tacks, it seems there was always some trouble in paradise. The “it” couple in country did a wonderful job of hiding whatever their issues were, because they clearly loved one another very much. It begs the question: was Blake a project for Miranda? To make him the loyal, faithful, perfect man that he could be with all that charm and those looks? Or was their relationship born of passion and lust that turned to a deeper understanding? Yes. All speculation. But every time we heard about it: controversy.

The brass ring of Blake Shelton controversies–to this point… When Blake Shelton and Miranda Lambert announced their split, and their plans to divorce, it came as no big surprise. In fairness to both parties, these things happen as a result of shared problems. Whether it was an issue of one hoping the other would change, or Miranda finding comfort in the arms of another man/men, because Blake drank too much or was having an affair…whatever theory/rumor you feel like hits home…they shared their problems. That didn’t keep Blake from accepting the brunt of the blow in the process, people thinking he had to have been at fault, one way or another. The divorce also helped to dig up his past marriage, and the belief that he left his first wife in order to pursue Miranda. Just a big, controversial mess.