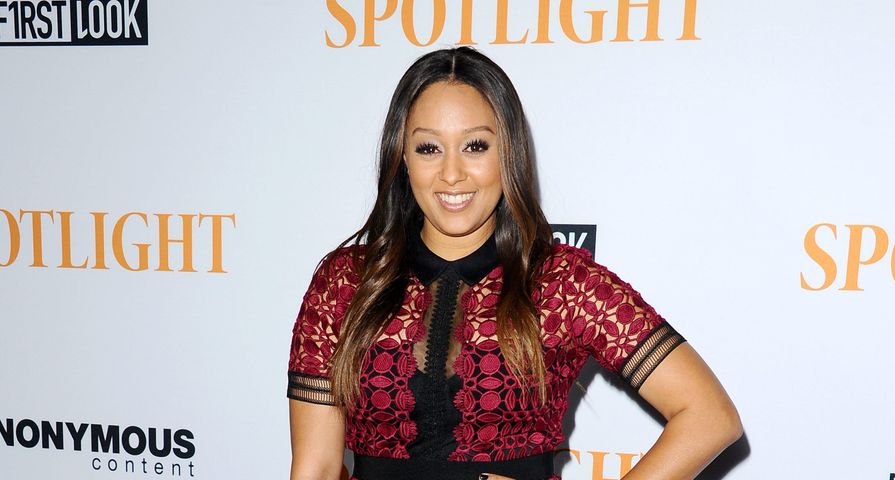 Tia Mowry, who’s also known as Tia Mowry-Hardrict, is one half of the famous identical twin sisters from the hit show, Tia & Tamera. The American actress and model rose to fame after she and her sister landed their own show Sister, Sister. After the show ended, they both went on to continue acting, landed their own reality show, and in Tia’s case, publish a book, star in her own Cooking Channel series called Tia Mowry at Home, host her own podcast and, more recently, become an author of a new cookbook on clean eating! In honor of all her recent success and the quiet chatter about the possibility of a possible Sister, Sister reboot, here’s a look into 10 things you might not have known about the child star!

She was born on July 6, 1978 in Gelnhausen, West Germany, to her parents, Darlene Renee Mowry and Timothy John Mowry, a member of the U.S. Army, who later became a police officer when they moved to California. Tia is bi-racial as her father is white and her mother is of Afro-Bahamian descent. Her parents met while attending high school in Miami and both joined the U.S. Army. They describe themselves as “Army Brats” because they moved around a lot as kids. They lived on Army bases in Gelnhausen, Hawaii, Texas and in Southern California. She and her sister, Tamera became born-again Christians when they were eight. They also have two brothers, Tahj Mowry, who is also an actor, and Tavior Mowry.

Tia Mowry’s acting career came about after she and her sister entered several talent shows and won! Tia would dance and Tamera would sing. At the age of 12, they convinced their mother to move to California so they could pursue a career in acting. She obliged and in 1990 the family permanently moved to California. Tia and Tamera began appearing in commercials and small roles for television. A producer saw the twins on the set of Full House and developed the series Sister, Sister — the role that made these two famous! Their show ran from 1994 to 1999, first on ABC and then The WB. When the show was cancelled for good, the girls enrolled in University and traveled to Europe to study humanities and Italian for a period of time.

The 38-year-old actress is now a huge advocate for clean eating, but back in the day, she was terrible to her body. As a teenager, she fueled herself on junk food because it was readily available to her. “TV sets are always catered, so I was surrounded by junk food 24/7. To my teenage self, it was like living in a Willy Wonka chocolate factory. Everything I wanted was at my fingertips: Twizzlers, M&M’s, Starbursts, potato chips, you name it. And if something I craved wasn’t there, all I had to do was ask: ‘Chocolate chip cookies, please?’ And they simply appeared. It was heaven. If heaven leads to health problems, that is,” said Mowry.

In order to stay skinny on this diet, she took diet pills. “I didn’t feel fat, but the pressure of being on television and wanting to look sexy and beautiful took over. I’m not proud of it. I got skinny, true, but the pills caused my heart to race, and I knew in my gut that I was hurting myself,” she said. Thankfully, Mowry made the decision to stop taking the pills when she admitted to it during a psychology class while attending Pepperdine University. “I had never told anyone about the pills, but I got honest in class,” she said. Her professor told her to write “Give up the diet pills” on a piece of paper and throw it into the fireplace. “As I watched the paper crackle and burn, something in me released. I haven’t touched diet pills since that day, and thankfully, I haven’t wanted to.”

Mowry found out she had endometriosis while she was still in college when she began experiencing extreme abdominal pain. After an appointment with an ob-gyn, she learned she had endometriosis and underwent two laparoscopic surgeries to help alleviate the pain. Mowry’s doctor told her that in addition to the surgeries, another solution to the diagnosis was to change her diet to alleviate the pain. One of the main things she had to eliminate was dairy which was one of the main causes of the inflammation.

The Sister, Sister actress met her husband, Cory Hardrict, on the set of the low-budget movie Hollywood Horror. “One day after work, I got into the car and I saw my husband at the bus stop. He was like, ‘I’m going home.’ And I was like, ‘Well, I can go ahead and take you home.’ And he was like, ‘Well, um…it’s uh…in the hood.’ And I was like, ‘I don’t care. So?’ So, yeah, I took him home,” she said. This innocent ride home was the beginning of their relationship. They dated for the next eight years, then got married in 2008 in Santa Barbara. Three years later they welcomed their only child Cree Taylor Hardrict on June 28, 2011.

Tia Mowry has been open about her struggle with endometriosis which has directly affected whether or not she and her husband, Cory Hardrict, could expand their family. She told People they would love to add to their family, but her diagnosis gets in the way. “So there’s a little bit of a challenge there, but I will say this: I am working on my diet,” she said. Her plan is to change up her diet which is now documented in her new cookbook. “I want to just clean myself out and get rid of inflammation in my body. Endometriosis basically grows from inflammation. [We’re] trying, but I don’t want to put too much hope into it. I don’t want to be let down.” She calls her first pregnancy a “miracle” and that the only reason she got pregnant with her son, Cree, was because she changed her diet.

Tia Mowry wrote her first cookbook, “Whole New You: How Real Food Transforms Your Life, for a Healthier, More Gorgeous You,” but it’s not the typical celebrity cookbook. This one chronicles the anti-inflammatory whole food diet that helped her recover from endometriosis and chronic migraines. It offers up recipes, tips on what foods to swap out of the pantry and mini cleanses to detox the body. “This cookbook was really personal for me. As I started to make healthier choices in my own life, I saw things — like my endometriosis or my migraines — be put at bay. And that was amazing to me. So I wrote this book based on the concept that food can be medicine in its own way; that it can worsen or help with an existing condition. That was my experience, and I’m hoping that writing about it can help others too,” she said in an interview with Buzzfeed.

In addition to cleaning up her diet and eliminating junk food and dairy, Tia Mowry got inspired by her new found health and went completely vegan! “I went vegan for a while because I wanted to detox. I’d started to feel sluggish every day because I was overworking myself. And I knew, just from experimenting with food in the past, that plant-based foods gave me more energy. But I ultimately stopped [being vegan] because I’m anemic, so I need a good amount of protein in my diet. Everybody’s different, but that’s what I needed to do for me,” said Mowry in an interview with Buzzfeed. Her husband, Cory, is also a vegan, but their son Cree isn’t, although she has him on a strict diet of no processed foods, sugar or gluten and all his food is organic.

Both Tia Mowry and her sister, Tamera, are mothers and wives, and according to Tia Mowry, she knew when her sister was pregnant with her second child before she even started showing! The same goes for Tamera when Tia got pregnant — they call it twin telepathy! “It’s a twin type of telepathy. My sister and I, we share the same DNA, so on paper, we’re the same person. I knew she was pregnant like right away — it’s crazy — but I asked her, and she said yes,” said Tia in an interview with People. “We cannot hide anything from each other. I know how she’s feeling and vice versa. I can tell right away if she’s hiding something, so secrets don’t work with the Mowry twins!”