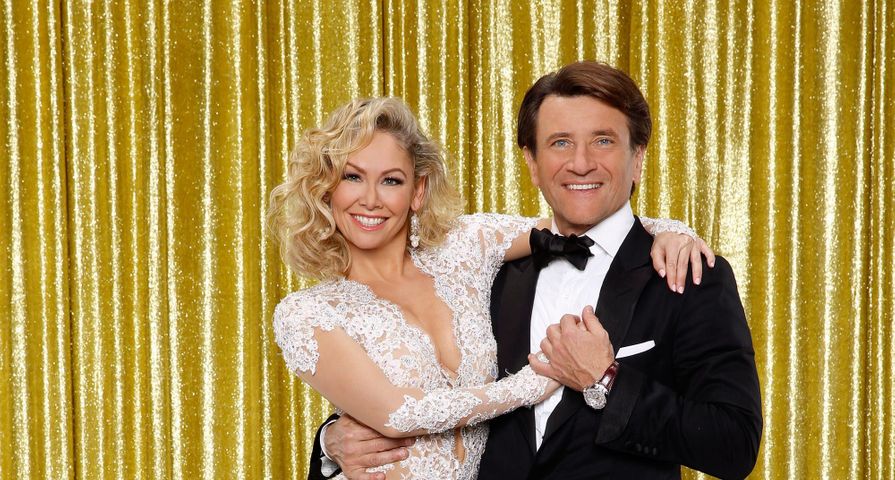 Since meeting on the set of Dancing With the Stars in 2015, dancing professional Kym Johnson (now Herjavec) and Shark Tank businessman Robert Herjavec have been inseparable. While the popular reality competition show has had quite a few real-life romances form, few have been as serious as Robert and Kym’s, and their love for each other is simply infectious. Now the pair are not only married, but have twins together and fans just can’t get enough of the adoring couple! Here are 10 things you didn’t know about the the pair and their relationship:

Sparks flew between gorgeous Australian pro dancer Kym Johnson and businessman Robert Herjavec almost immediately after he was cast for season 20 of Dancing With the Stars and Johnson was assigned as his partner. According to many, the pair were already becoming romantic during rehearsals before the season even started taping. Herjavec’s Shark Tank co-star Daymond John revealed, “I saw it immediately. I just saw that – this isn’t just your dancing partner, but you’re talking to “her” in a very caring manner.” Despite the almost immediate rumors that the dancing duo were becoming partners in real-life as well, they played coy about their relationship. Only a week after the season premiered in March 2015, Herjavec was asked about his relationship and hilariously joked about a different DWTS hookup instead to distract from talking about his status with Kym. “I am dating Bruno [Tonioli]. I will admit it, I never realized he was that good looking in real life…He has a Ferrari, you know!” After months of speculation, Johnson finally confirmed their relationship when she revealed Herjavec would be by her side when she returned to Dancing With the Stars Australia. “He’s lovely, he’s great. He’ll be at the first show watching and it’s really lovely to have him here,” she said at the time. Later she said of their relationship, “We were friends first. We got to know each other on a friendship level. That developed into something else. We’re both each other’s number one fans, and have respect for each other.”

Since confirming their relationship, the two have never been hard pressed to find loving things to say about each other and often gush about their love. One of the biggest attributes which helped them form such a strong relationship was that they supported each other in everything. “I’m learning something new about her every day,” Herjavec said in an interview. “She’s starting a business right now, and I can’t believe how committed she is and how hard working she is. I always knew she was, but it’s scary to go into a different field you haven’t gone before. She’s approaching it with the same level of enthusiasm and courage that she’s done her whole life. I find that very motivating. I find that so impressive about her.” Following their wedding, Kym said, “It feels like we’ve known each other forever. It’s been almost three years since we met. He’s just amazing. We’re best friends, and it’s just easy.”

At the time that they met, Herjavec was 53 and Johnson was 39, but their over 10-year age gap didn’t dissuade them and both had been in very serious relationships before and knew what they wanted. The businessman had previously been married to Diane Plese since 1990, but the pair split in 2014 and finalized their divorce in 2016. Although neither commented on the reason for their separation, Herjavec did say, “Human relationships are so difficult … I wish nothing but love and peace for our family as we move forward from this.” Herjavec and Plese share three children together, daughters Caprice and Skye and son Brendan. Meanwhile, Johnson was in a serious relationship with Australian cricket player Shane Watson and the two became engaged, but the pair split in the mid-2000s after three years together.

Following his surprising split from Diane Plese, Herjavec began dating 32-year-old actress Danielle Vasinova, and when Herjavec’s relationship with Johnson became public, the actress had an ominous warning for the dancer. “She needs to know the truth… I don’t want anything like what happened to me to happen to her,” said Danielle to the Daily Mail. She also claimed that the millionaire businessman cut off all contact with her and forced her to move out their apartment when he met Kym. In 2017, Vasinova resurfaced when she sued Herjavec with claims that he repeatedly sodomized and raped her, but Herjavec’s lawyer quickly responded saying it was all an extortion scheme. “The allegations are false and with the sole intent for monetary gain. My client has had enough and will not tolerate extortion.”

Following his split from Diane Plese and before his stint on Dancing With the Stars, the business mogul later revealed he became depressed and suicidal. In the summer of 2014, shortly after his wife filed for separation, Herjavec revaled he contemplated jumping from the balcony of his Toronto hotel room. “I just wanted to end it,” he told People magazine. “It’s been a terribly difficult year. We were great parents and a great team but we drifted apart.” He then also revealed that after his split from his wife, his three kids who were in their teens and early twenties decided to stop speaking to him. “Everyone has their kryptonite. For me, it was my kids. It took me to a place I never thought I would go.” After confiding in his pastor about his depression and suicidal thoughts, his pastor suggested he volunteer at a homeless shelter in Seattle called Union Gospel Mission. Herjavec revealed helping others much less fortunate than he was helped him heal his own pain and become involved in helping theirs. “Nobody knew who I was. People thought I was a recovering addict.” He added, “I was hollow and broken, and these people saved my life.” Shortly after his recovery, he got the call for Dancing With the Stars and knew his life was on a whole new path but little did he know it would lead him to a whole new love as well.“I met Kym, and I was scared. But it was like a ray of sunshine. She made me feel really good about life and myself. And then I realized, ‘Oh my God, she’s a super hot, sexy Australian! Bonus!’” he joked.

After just less than a year of dating, Herjavec decided he was ready for the next big step with Johnson and he proposed on February 27, 2016, with a gorgeous 6.5-carat emerald cut ring. He explained that he surprised Johnson with an elaborate setup. “We went to the house and I had rose petals going up to the pool. “In the pool was a big swan and on the swan was a box. She pulled the swan in, opened the box, and I said, ‘Actually that’s not for you. That’s for me,’” he said of tricking his fiancee. “I opened the box and the ring was inside. And I said, ‘Will you marry me?’ and she started crying and doing crazy sounds. And then I asked again and she started crying and doing crazy sounds. And I asked a third time and I was like, ‘Ok this is really uncomfortable!’ he joked. Of course, Johnson said “Yes!” eventually and Herjavec added, “I still can’t believe that a year after walking into a dance studio of all places, my life has changed this much. Kym is an incredible woman and I’m just so excited for what the future brings for us.”

After jumping right into the planning, the adorable pair were married only a few months later on July 31, 2016, at the Four Seasons in Beverly Hills. Johnson wore a Monique Lhuillier strapless gown while Herjaved donned a classic white tuxedo with black pants and a black bow tie. There were many famous faces in attendance, and Johnson’s Australian family flew in but there was also a lot of surprises! Johnson performed a surprise dance number with a local Croatian group honoring Herjavec’s Croatian heritage which he said was the “sweetest surprise.” Meanwhile, he surprised his gorgeous bride with a rendition of “Happy Birthday” sung by none other than Olivia Newton-John, because Johnson’s birthday was only four days after their wedding. “She’s my idol!” Johnson said of the moment. “I adore her. I was shaking. And then we sang ‘Let’s Get Physical’ together. It was like I was in some weird dream.” The duo they read handwritten vows and exchanged rose gold and diamond rings by jeweler Peter Marco, and naturally, the dancing took over! “People were still dancing at 2:30 a.m.,” Herjavec stated. “We didn’t need to pay for the food! I don’t think anybody ate.”

Although it truly seemed as though their wedding day was a fairytale come to life, there was a minor mishap. In all the excitement and joy, for a brief moment, no one noticed that Johnson’s gown had actually caught on fire! “We smelled something and we thought, is someone having a barbecue?” Herjavec told PEOPLE. “Then we realized that Kym’s dress was on fire!” According to Johnson, her gorgeous, yet rather large dress, accidentally passed over a candle on her way to the altar. “I almost went up in flames! Thank God my man of honor stomped it out with his foot. But underneath my dress is completely singed,” she said.

With Herjavec already in his 50s and with three grown children from his previous marriage, the possibility of Herjavec and Johnson starting a family wasn’t really discussed — but then they revealed their surprise! On Monday, December 11 Johnson confirmed she was pregnant with an adorable Instagram post featuring a sonogram in which her unborn child seemed to be giving a thumbs-up gesture. She captioned the photo, “It’s a thumbs up.” A few days later, however, they had another surprise — they were actually expecting twins! “We waited so long that we decided to double up!” the couple revealed. “We are very grateful for the blessing of twins.” Of course, Johnson was never shy about her dream of motherhood. In 2012, she opened up about dating and said, “I’m looking for a good person I connect with… I can’t imagine myself without kids… I really want to be a mum. Hopefully I can find the right man.” On April 23, 2018, Kym gave birth to a son, Hudson Robert Herjavec, and a daughter, Haven Mae Herjavec.

Before meeting Herjavec, Johnson said she wasn’t “opposed to dating a celebrity,” when asked about the possibility of dating one of her star partners, and while Herjavec is known for Shark Tank, it is his business sense that has given him incredible success. Together the pair has a combined net worth of $201 million with $200 million being credited to Herjavec and Johnson bringing in her own $1 million. According to reports, after the two became engaged, the businessman asked for a prenup that would prevent him from paying out millions like he did to his ex-wife if his marriage to Johnson ever were to end. “Kym will get $100,000 for every year they are married, capped at $1 million, if the marriage ends,” a source told the Daily Mail. They added, “The houses they live in are all in Robert’s name, and Kym won’t have any claim to the properties if they split.”