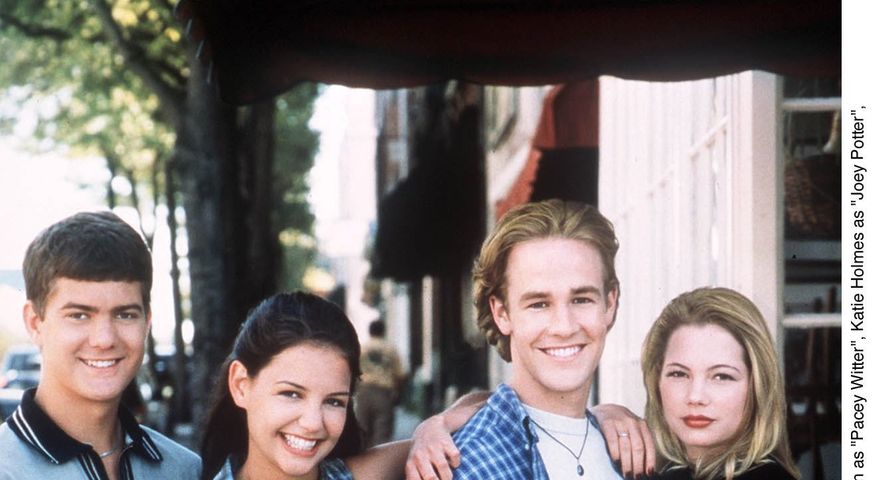 “Dawson’s Creek” premiered on January 20, 1998 and aired its last episode on May 14, 2003. It was an instant hit on the WB with its younger demographic. The show launched the careers of James Van Der Beek, Katie Holmes, Joshua Jackson and Michelle Williams, turning them into household names. Many of us remember this show fondly. We kind of grew up with it, with its many love triangles, sharp dialogue and SAT vocabulary. Since it is the anniversary of when “Dawson’s Creek” ended it’s six-year run, we figured that now would be a good time to take a trip down memory lane.

The show’s lead character, Dawson Leery, was based on creator Kevin Williamson. Like Leery, Williamson was obsessed with movies and would share his bed, platonically, with a girl down the creek.

Selma Blair auditioned for the role of Joey Potter.

During filming of the first season, Joshua Jackson and Katie Holmes had a brief off-screen romance. She considers him her “first love.” “It was something so incredible and indescribable that I will treasure it always,” she told Rolling Stone.

Dawson’s father was killed off of the show because the actor, Wesley Shipp, had hiked his fee during renegotiations. Shipp wasn’t happy on the show anyway. He was frustrated with the increasingly limited role that that parents were playing, which is why he hiked his fee to begin with.

During season one, Scott Foley had a recurring role as a quarterback named Cliff. He took Jen, Michelle Williams’ character, out, which forced the other guys to come to terms with the fact that they were all attracted to her as well.

Katie Holmes auditioned for the part of Joey Potter by videotape. She couldn’t make it to Los Angeles for the audition because she had a school play. When Kevin Williamson watched the tape, he thought she was perfect for the part. “She had those eyes, those eyes just stained with loneliness,” he said.

WB execs were worried that Katie Holmes’ came off as too angry on-screen. The show’s producers had to convince them that Joey Potter was the sort of character that audiences would inevitably root for.

Jason Biggs auditioned for the role of Pacey Witter.

The entire first season was filmed before the first episode aired.