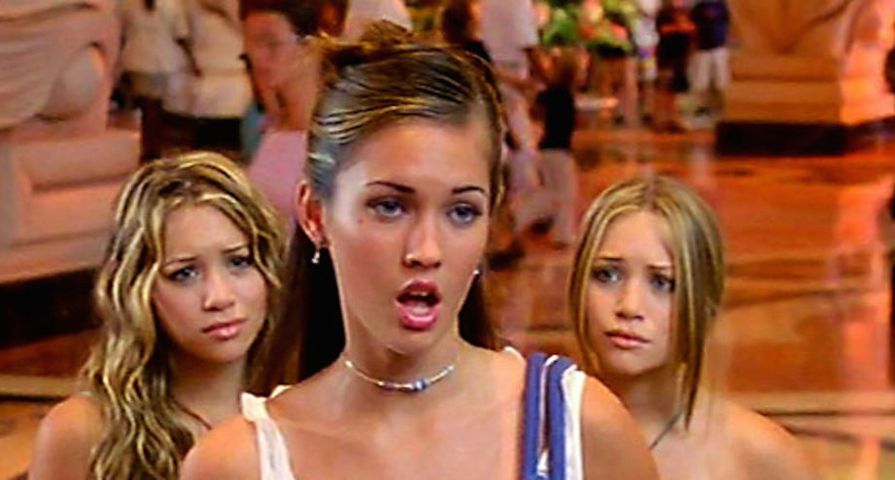 Mary-Kate and Ashley Olsen are well known for their time on Full House as the adorable Michelle Tanner. However, their acting careers didn’t stop at that. Near the end of Full House, the fraternal twins began to establish themselves individually by appearing in roles outside of the ABC sitcom. Mary-Kate and Ashley starred in numerous films and shows between 1992 and 2004 and the two even started their own production company called Dualstar. In the ’90s and early 2000s, “the Olsen twins” were a highly franchised brand, and while the girls were producing and starring in films, some of Hollywood’s well known celebrities were making their acting debuts co-starring alongside them. Here are 12 celebrities you might have forgotten appeared in Mary-Kate and Ashley Olsen movies:

Riley Smith is a model turned actor who had made a name for himself in television and film before being hand picked by Ashley and Mary-Kate to play the rebellious bike messenger in the 2004 film, New York Minute. Before this film, Riley Smith was well known for his roles in 7th Heaven and Bring It On, but today he continues to be active on-screen with more recent roles on Nashville, 90210, True Detective, Criminal Minds, True Blood and more!

An even bigger celebrity in the Olsen’s last film, New York Minute, was Bob Saget! The Full House father had a quick cameo in the Olsen twins last movie. He was there for their first acting job, and their last — talk about coming full circle!

Troian Bellisario was one of our favorite leading ladies in the Pretty Little Liars series, but 12 years before she landed her role as Spencer Hastings, Troian had a role in the 1998 Olsen film, Billboard Dad. We aren’t too surprised to see Troian in an Olsen film from back in the day because she is reportedly childhood friends with the twins.

Jane Sibbett is most well recognized for her role as Ross Gellar’s lesbian ex-wife on the well-loved sitcom Friends, but she also had a large role on the Fox sitcom Herman’s Head. After making a name for herself on the small screen, Sibbett appeared in the 1995 Olsen film, It Takes Two. In her role, Sibbet almost marries Ashley’s father and threatens to send her soon-to-be stepdaughter to boarding school, whereas Kirstie Alley, another celebrity who starred in this film, was the loving social worker who Mary-Kate wants as her adoptive mother.

Willie Garson had already been making a great career for himself in the HBO television series Sex and the City as Carrie Bradshaw’s beloved gay best friend Stanford Blatch, but viewers might not have recognized the actor when he appeared in the 2000 film Our Lips Are Sealed. Garson appeared as federal Agent Norm.

Marguerite Macintyre was also in the film Our Lips Are Sealed in the role of the twin’s teacher. This was one of MacIntyre’s first films — before that she’d appeared in several television shows, but her best known re-occurring role after was several years later on the popular teen series, The Vampire Diaries, as Sheriff Liz Forbes.

Jesse Spencer began his acting career with a role in Winning London as a British heartthrob, Lord James Browning Jr. At this time, the Australian actor was unknown, but today he is well recognized for his role as Dr. Robert Chase for 9 seasons on House. He’s also been the love interest of Brittany Murphy on Uptown Girls and is currently Matthew Casey on Chicago Fire.

One of our favorite One Tree Hill men, Austin Nichols, can be found toying with the hearts of Ashley and Mary-Kate Olsen in the film Holiday In The Sun. Long before he was Julian Baker on the popular teen drama, he was Griffen Grayson in the 2001 Mary-Kate and Ashley film.

Jared Padalecki starred in the film, New York Minute, as a love interest. Before that, Jared had made an acting career for himself as Dean on the popular television series, Gilmore Girls. Only one year after his role in New York Minute, his career became bigger than ever as Sam Winchester on Supernatural, and his time as a love interest in the 2004 Olsen twins film is long forgotten.

Eric McCormack played the twins dad in Double, Double, Toil and Trouble. But it wasn’t until he was cast as Will in Will and Grace, that he became a well-known actor.

Michael Cera, the branded awkward nerd, debuted his career as a bully to the Olsen twins! He was the 11-year-old boy in the 1999 film Switching Goals.

Today, Megan Fox is a popular actress who is well known for her roles in big movies like Transformers, Ninja Turtles, and Jennifer’s Body. But before she became one of Hollywood’s hottest actresses, she played a spoiled mean girl, Brianna, in the 2001 film Holiday in the Sun.