Home » Trending News » We Weigh In: Who Is The Mysterious Figure Watching Abby On Y&R?

We Weigh In: Who Is The Mysterious Figure Watching Abby On Y&R? 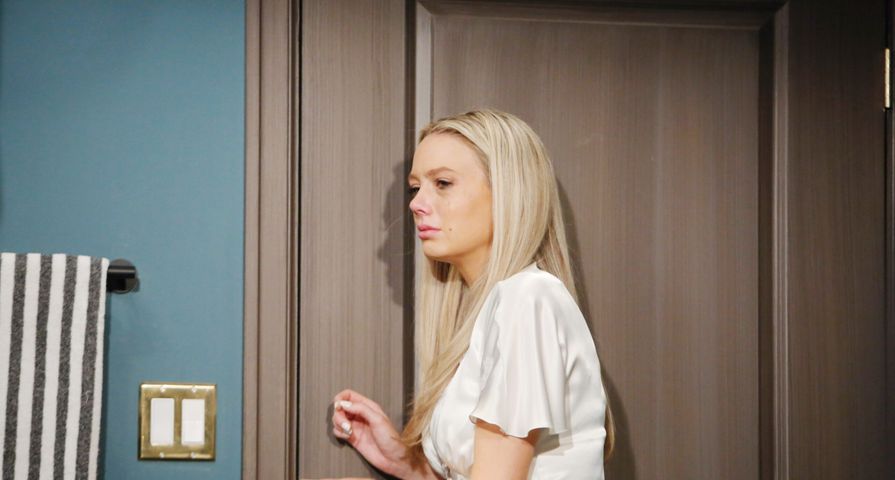 In an eerie scene from the June 18th episode of The Young and The Restless (Y&R), a mysterious figure was seen looming over Abby Newman-Abbott-Chancellor (Melissa Ordway) as she slept. There was no way of identifying the shadow, but it resembled a man.

Abby wasn’t the only one who woke up feeling a bit uneasy; the scene jolted Y&R viewers awake as well! Let’s face it: the storyline of Abby missing Chance has been a slog to watch. Knowing that actor Donny Boaz will not return (and the role of Chance is in casting limbo) further nullifies any anticipation amongst viewers that her long wait is about to end.

So with this new development of a strange presence in Chancellor mansion, audiences are riveted by the possibility that Abby’s storyline might spice up over the coming weeks. Just who is this mysterious onlooker? We’re weighing in.

Want Y&R spoilers? Check out Young and the Restless Spoilers For Summer 2021

Let’s start with the obvious candidate: Chance. Now, we don’t recall Chance having any stalker-ish tendencies, but it makes sense to start with Abby’s husband since he’s the one missing. Also, Y&R has been name-dropping him a bunch in recent weeks, which suggests that show-writers have a plan for the character’s return.

But herein lies the mystery within the mystery: who will be playing Chance? Last we heard, Y&R broke up with Donny Boaz (and it wasn’t exactly mutual). “I was told that Chance is not being replaced or killed off,” Boaz shared on Instagram at the time. “He just isn’t gonna be there anymore.”

Since we all know that isn’t going to remain the case, maybe Y&R will use a recast opportunity to make Chance purposefully look different. Is it possible that Chance underwent some sort of plastic surgery, either to reconstruct his face after an injury, or blend in while undercover? Is it possible that he’s endured some kind of trauma that has brought him home but unwilling to come out of the shadows? Surely, a soldier of his pedigree would be able to hide undetected in his own home.

As long as we’re talking about fallout from Chance’s mission, we should also entertain the idea that some of Chancellor’s enemies could be watching Abby and the residence to ascertain his whereabouts. The mission, although shrouded in secrecy, is clearly dangerous enough that Chance’s life is constantly in danger. It seems plausible that any conflict with stakes that high could make his home-life with Abby an important strategic discovery for his enemies.

Next on our list of suspects is Abby’s previous husband, Dr. Ben “Stitch” Rayburn (Sean Carrigan). Although he hadn’t been on the canvas since 2017, Carrigan is back onscreen as the good doctor. Given the hardships he and Abby endured during their marriage, plus the way she fell out of love with him, is it possible that Rayburn has become obsessed with his ex-wife?

The couple’s inability to have a child helped destroy their marriage, and judging from his flashback memories during the episode of June 25th, that’s the way he remembers it. In his first flashback scene, they happily discovered they were expecting; in the second scene, they had lost the baby (more on that, shortly); in the third, they were separating. So if Ben hasn’t moved on, the news that Abby has a surrogate and an absentee husband might present him with an opportunity to rekindle their relationship. In any case, whether Rayburn comes back to Genoa City as a friend, a doctor or a stalker, it’s sure to speed up the timeline for Chance’s recasting.

Perhaps the good doctor will return to the canvas to help Abby in a professional capacity. Seeing as how Dr. Rayburn helped Devon Hamilton with his memory loss after a car accident, perhaps the good doctor will be called to Chancellor mansion because Abby is struggling mentally. What if her worrying over Chance has spiralled into a pathological condition that requires medical intervention? In that case, the mysterious presence Abby felt might be imaginary.

As long as we’re mulling over factors that contributed to Abby and Stitch’s separation, we have to mention Max Rayburn. Not only did Ben’s son believe that Abby was responsible for his mother’s fatal car accident, he methodically planned and executed Abby’s staircase fall, which resulted in the loss of her baby.

Max came up in two conversations during that same June 25th episode. In the first mention, Ben solemnly shared that Max is still struggling, and has spent the last several years living in different long-term psychiatric facilities. In the second mention, Abby, Mariah and Nina provided viewers with a summary of Max’s psychological problems. So it isn’t unrealistic to think that the return of Stitch could also see the return of a rapidly aged, twenty-year-old Max. While it’s a long shot, nobody else on this list has so much contempt for Abby.

Want more Y&R spoilers? Check out Young and the Restless Spoilers for the Week (June 28, 2021)

Finally, it was reported on July 6th that Christian Telesmar has joined Y&R to play “Tyler”. The casting news didn’t offer a last name or any other hints but rumor has it, Telesmar will assume the role of Tyler Michaelson — yet another ex of Abby’s! We haven’t even seen Tyler’s return to the canvas yet, so it seems like a stretch to add him to our suspect list. However, he’s sure to resurrect some awkward memories for Abby and Mariah! And who knows, if Chance never comes home and “Stitch” ends up being a villain, maybe Abby can get her life back on track with Tyler. At this point, fans know that any romance will be an improvement!

Share your opinion below. Who do you think the mysterious figure is?