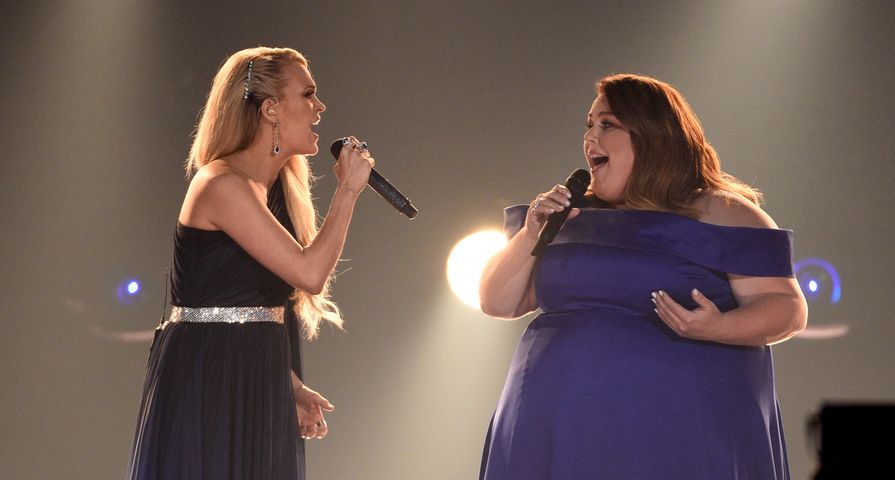 Fans of the hit drama This Is Us knew that Chrissy Metz could sing, but she still stunned fans with her performance during the 2019 ACM Awards on Sunday night in Las Vegas.

The talented actress sang her song “I’m Standing With You” from her upcoming movie Breakthrough and was joined onstage by country stars Carried Underwood, Lauren Alaina, Mickey Guyton and Maddie & Tae.

Metz donned an off-the-shoulder navy blue gown as she belted out the emotional lyrics alongside the country stars, who all donned blue gowns as well in the incredible performance.

Ahead of her ACM Awards debut, Metz opened up about her excitement on the red carpet. “I’m excited. I mean, you know, as a little girl, you always dream about something like this. But to actually do it and to hold a stage with these incredible women — Lauren Alaina, Carrie Underwood, Maddie + Tae, Mickey Guyton. Are you kidding?” she said. “It’s really exciting.”

“Here’s the thing. I just ran into Tanya Tucker. I was like, she literally kissed my hand — I have her lip gloss on my hand, folks. I really do love all of these acts and all of these artists,” Metz added on red carpet. “I got to see George Strait and Miranda Lambert sing one of my favorite George Strait songs at rehearsal. I was like, losing my mind. Everyone here is just incredible. I love country music.”

Metz has showcased her singing abilities a few times over the three seasons of This Is Us, but her performance still shocked many.

Before her big break as Kate Pearson, the 38-year-old actually auditioned for American Idol but didn’t make to live auditions in front of the judges.