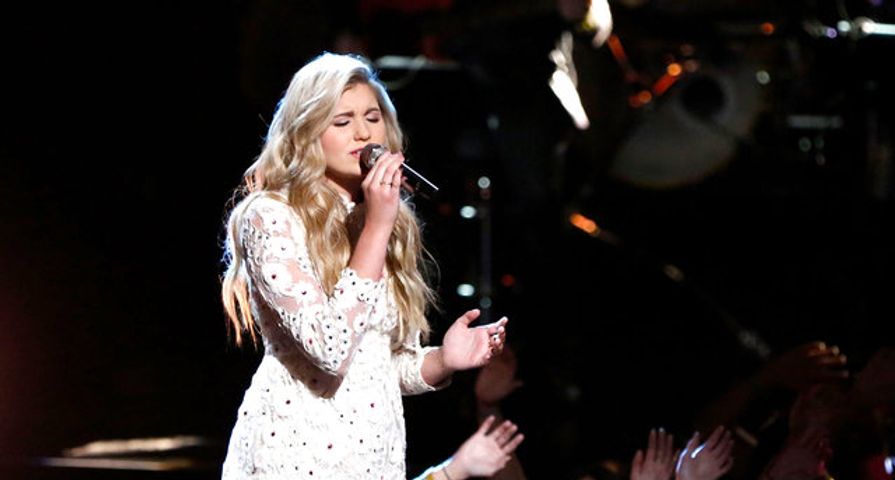 Tonight we saw performances by the remaining Top 11 contestants. Each had to sing to win the America’s votes in hopes of surviving tomorrow’s eliminations.

Stephanie Rice held true to her word and took to the stage in a way we haven’t seen from her before. Last week Rice mentioned a desire to really relax on stage and show a different style of performance. Tonight we witnessed exactly this in her rendition of The Who’s “Behind Blue Eyes”. Rice showed extreme control in her dynamic transitions from singing enticingly quiet to a powerhouse roar.

Vanessa Ferguson took on “Diamonds”by Rihanna and she absolutely nailed it. As coach Alicia stated in the rehearsals scenes, no one own’s their style and voice as much as Vanessa. This singer radiates confidence in their stage presence and it definitely gives them an extra edge over their fellow contestants.

Chris Blue performed “When a Man Loves a Woman” by Percy Sledge. Chris knew this was the week he had to really prove he deserved to move to the next stage, and he did not disappoint. Chris was able to make the popular song his own through his classic riffs without having to deviate too far from the original. Overall it was a rock solid performance that will hopefully keep him safe for the ext round.

Lilli Passero proved she’s in this competition to win performing “Town Without Pity”by Gene Pitney. Last week, Lilli’s performance was unconvincing and dropped her to the back of the pack in terms of star power. However, tonight, the soulful singer shook us to the core with a controlled and timeless performance. Lilli, of course with help from Adam, truly found her sound and I hope we get to hear more of it.

Mark Isaiah sang “How to Love” by Lil Wayne. Isaiah was in the hot seat last week and was almost eliminated, so many were hoping this is the week he would blow us all out of the water. The young singer stuck to what he knew in a performance that, although was not bad, was not at the same level as the rest of the competition. Sticking to the mainstream genre could work in his favor, however, his lack in variation could hurt him if paired against the range of other contestants.

Jesse Larson chilled us with his performance of “Human”by Rag’n’ Bone. We got to experience a different side of the singer in a mellow rendition of the song. He proved tonight that you don’t need to have extensive riffs or excessively aggressive notes to captivate an audience. It was a performance that most likely will see him through to the next round.

Aliyah Moulden shook the ground with her performance of “Take it Back” by Reba McIntire. Throughout the competition we have heard a steadiness in Moulden’s voice even through the hardest and highest of riffs or notes. Blake stated that Reba would be beaming because of Moulden’s performance, and true it was a hearty and original performance. However, Moulden is starting to become a one trick pony in which the booming voice never seems to end. More changes in dynamics could really show the control this young performer has to offer and could maybe even win them the competition.

TSoul mesmerized us with his cover of “Lay Me Down” by Sam Smith. I literally felt as though I was in a trance listening to him sing and play the piano so effortlessly. The allusion was shattered as soon as TSoul left the piano. Alicia also remarked on the sudden mood and performance shift at this transition. Although the performance was remarkable at the beginning, who knows if voters will feel that strongly about the second half despite Alicia’s comments.

Lauren Duski melted the audience with her performance of “Somewhere In My Broken Heart” by Billy Dean. I’m not a huge country fan, but I was in absolute awe of this performance. Duski has the control, confidence, and in general the whole package the next winner needs. Not only are her transitions flawless, but the raw emotion you can feel project from her dynamic changes make her a force to be reckoned with. I wouldn’t be surprised if Duski is the one to win it all, especially after tonight’s performance.

Hunter Plake sang “All I Want”by Kodaline. Plake has definitely shown progression throughout the season so far in consistently well performed numbers. Tonight was no exception as he held the stage with a confidence that can be hard to find. Plake’s performances are so enjoyable because as a viewer, you know that he knows what he needs to do to really own a piece. There’s never a risk of Plake giving a truly bad performance. Plake is so in tune with his talent that even with misplaced notes he knows exactly what he needs to do to recover.

Brennley Brown gave the purest performance tonight in a rendition of Joni Mithell’s “River”. Through rehearsal scenes we watched Brennley and Gwen work extensively to give the Mitchell song a coutnry vibe, and the transition was amazing. Lauren Duski has close competition with this young star!

Stay tuned tomorrow night to find out who will be sent home!