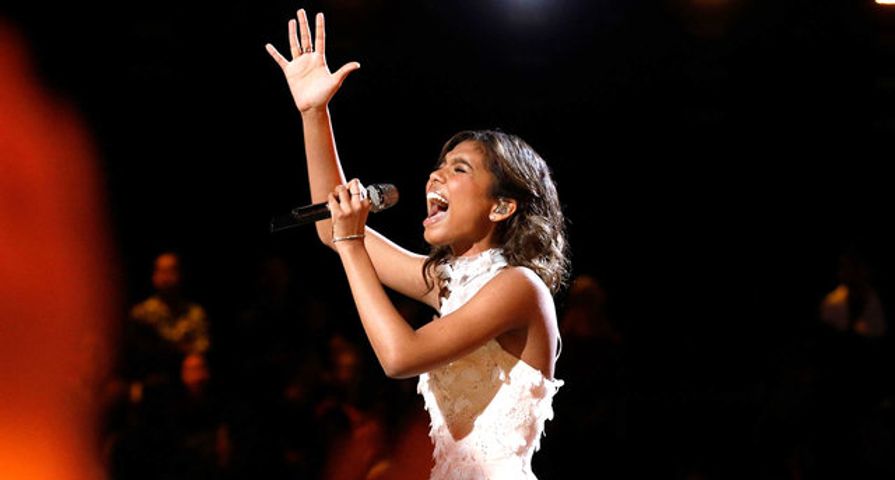 Tonight was Part One of two for The Voice Season 12 Finale. This meant that the four remaining artists would perform solos and duets with coaches in hopes of collecting enough votes to win the grand prize: $100,000 and a record deal with Universal Music Group. At this point in the competition, each finalist has already proven how much they deserve to be up on that stage sharing their immense talent. So with tomorrow being Part 2 of the finale I don’t think anyone will be too upset with any of the possible results as they are all so gifted.

Aliyah Moulden from Team Blake, and also the youngest contestant to have made it this far in the competition, performed an original single called “Never Be Lonely”. The song was undeniably catchy, however Aliyah clearly had a difficult time with some of the lower notes during the performance. Although the young singer has shown astounding power and voice control throughout the season, this was not one of her more memorable performances.

Jesse Larson from Team Adam then sang a cover of “Takin’ It To the Streets”. Jesse has been one of the more consistent singers of the season has he brings the same confidence and vocal control in each song he sings. However, although musically flawless, something was missing from this performance to really make it memorable a a finale performance.

Chris Blue and Coach Alicia teamed up to perform “Diamonds and Pearls”. Although the song started of strong, a dynamic duo, at one point Alicia went off on a musical tangent and the pair lost complete connection for the rest of the song.

Lauren Duski from Team Blake performed a cover of “The Dance”. Lauren has yet to miss a single performance, she gives each one 100% her all and it is always breathtaking. At this point its hard to believe we’ll be seeing the last f Duski on this show. She may be the first contestant to go on to have a truly successful career after the show whether or not she wins the finale.

Aliyah Moulden and Coach Blake then sang “Dancing In the Street”. Although at times the two seemed to be trying to be heard over the other, the performance overall was well done. The genre definitely suited Aliyah’s vocal styling and I’m glad we got a chance to hear Aliyah again after her solo in a different vocal styling.

Chris Blue from Team Alicia performed an original song called “Money on You” and I already want the rest of the album. It was absolutely perfect, not only is the feel of the song reminiscent of Bruno Mars, it’s also a sound that is completely original and like nothing else on the radio. Chris is beyond ready for that record deal, and this performance proved it.

Jesse Larson and Coach Adam then performed “Let’s Go Crazy”. During this song Jesse validated his endless talent as a guitarist however his vocals didn’t hold up in comparison. Jesse has amazing talent, and even during this song he was on pitch, hit the notes and yet there was something missing in this iconic Prince classic.

Lauren Duski and Coach Blake absolutely nailed “There’s a Tear In My Beer”. We all know Lauren can crush a ballad, but it is always so nice to see her channel a more fun side to her. She can literally do know wrong.

Jesse Larson the crushed his original song called “Woman” and here we go, this is the pizzazz we’ve been waiting for. Before this, previous performances have been musically impressive, but have missed a unknown factor that kept them from being excellent. And tonight Jesse found it. This song had a depth and spirit to it, that only Jesse could bring. Jesse was in his element during this song and I think viewers finally saw the full talent Jesse has to offer the coach Adam has been telling us about.

Aliyah Moulden then returned to the stage with a cover of “Signed, Sealed, Delivered I’m Yours”. Overall it was a quality performance from Moulden. The genre was perfect and Moulden was really able to express her vocal skills throughout the song in a way her original song or the duet couldn’t quite capture. Even with what seemed like possible mic difficulties at the beginning of the piece, Moulden really reeled it in to create a stellar performance.

Lauren Duski sand her original song “Deja Vu” and she needs to stop, her talent is too overwhelming. I really can’t comprehend how not only can someone have such amazing vocal talent, but also be able to write such haunting lyrics. It really isn’t fair.

Chris Blue then ended off the night with a performance in every sense of the word. Chris is the definition of an entertainer, he can sing, dance, he oozes charisma on the stage, what more could you ask for? It was the perfect way to close off the competition.

Tomorrow the final results are in and after tonight’s performances, I couldn’t even guess as to who will be the lucky winner. I guess we will all just have to wait to find out!