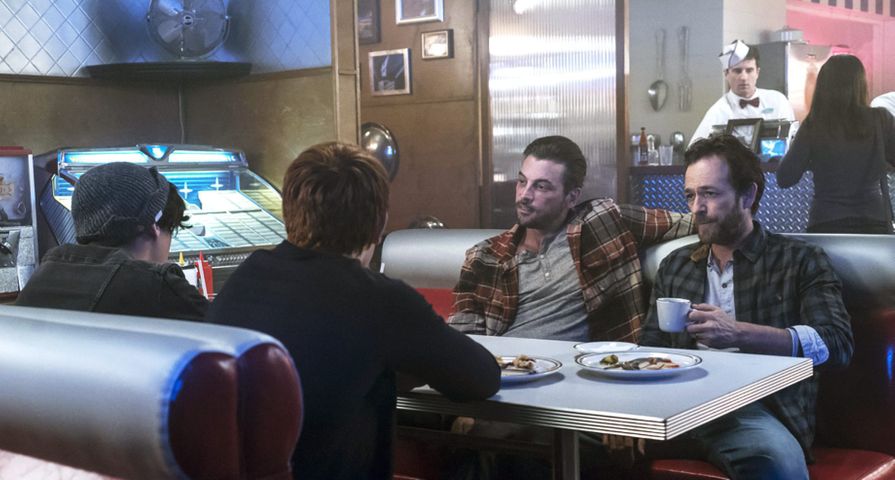 With the season four premiere of Riverdale only days away, the cast and fans are preparing for the most emotional episode yet.

Title “In Memoriam” the episode will see Archie (KJ Apa) finding out that his father Fred Andrews (Luke Perry) has passed away, and the episode will be in tribute to the loss of Perry after he suffered a fatal stroke at the age of 52 in March.

“It was very difficult for us all,” Skeet Ulrich, who plays F.P. Jones said about the episode at the 2019 New York Comic Con. “To me, in some ways, it meant reliving something incredibly painful. We felt the need and the want [to pay him tribute], but I don’t think any of us wanted to live in that again—[the first episode of the season was] a beautiful episode, but incredibly hard to perform.”

Meanwhile Molly Ringwald, who plays Fred’s ex and Archie’s mom, Mary, added,  “I think we all dealt with it in different ways. I didn’t get to go to Luke’s memorial so [this episode] was really like my good-bye to him.” She continued, “It was kind of what I needed. He was my guy. It felt like a nice goodbye for me.”

Marisol Nichols, who plays Hermione Lodge, said, ““It’s funny, Luke passed, and we had two episodes after that and when you come back you’re right back in the incident. It’s like, you expect to see him at Pops, or there was his trailer. His spirit is still with us.“

Back in June, Riverdale’s showrunner revealed that the first episode of season four would be a memorial episode for Perry and is titled “In Memoriam,” and spoke out about why they waited to honor the actor who portrayed Archie’s dad, Fred Andrews. “It was just devastating,” he said in May after Perry’s sudden death at 52. “And we wanted to honor Luke, and figure out the best way to handle the character of Fred Andrews in the show, so we sort of said, you know what? Let’s not squeeze, let’s not rush to squeeze something into the finale, or into the last couple of episodes, let’s really think about it, and let’s tell that story at the beginning of season four.”

It was also revealed that Perry’s longtime friend and Beverly Hills, 90210 costar Shannen Doherty will be a special guest star in the episode to honor her late friend.