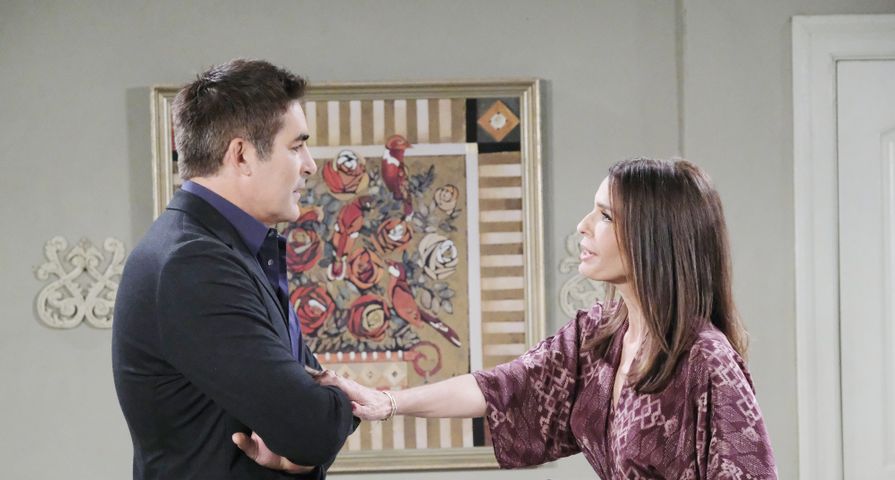 There won’t be any dull moments this week on The Young and the Restless, Days of Our Lives, General Hospital and The Bold and the Beautiful! Find out what will happen with our spoilers for July 7, 2020:

Tuesday on Y&R, Gloria will host family and friends for an Abbott Family barbecue. Also, Devon will struggle with a secret, and Victor will lift Nikki’s spirits. Originally aired on July 4, 2005.

Steve will make a big announcement to John and Marlena on Tuesday’s episode of DOOL, and Kayla will keep thinking of her past with Steve. Also in that episode, Justin will press Hope for answers while Victor, Justin, and Sonny will have a warm moment before the ceremony begins.

GH’s Tuesday episode originally aired on May 4, 2010. What will happen? Michael will confess to his involvement in Claudia’s demise.

On B&B on Tuesday, Whip (Rick Hearst) and Deacon (Sean Kanan) will butt heads, explaining that there is no way that Brooke would ever betray her daughter, Bridget, and that Whip must forget and pretend Brooke’s baby is really Deacon’s. Meanwhile, Bridget, not realizing that her mother is pregnant with her husband Deacon’s baby, will throw her a baby shower. Taylor, Kristen (Tracey Melchior), and Erica (Courtnee Draper) will attend, as well as Megan (Maeve Quinlan) and Stephanie, both of whom know the truth about Brooke’s secret. After the shower is over, Meagan will assure Whip that Deacon won’t do anything to jeopardize his relationship with Bridget, while Deacon will head over to Brooke’s house to talk about their baby, where he will profess his love for her. Originally aired on June 14, 2002.

Calling all Days of Our Lives (DOOL) fans! Wondering what will unfold within in the little town in the coming day? Another July week, another July wedding, and another chaotic event! Learn about all that goes right and all that goes wrong (plus more on other Salem storylines) in the DOOL spoilers for the week of July 6, 2020.

According to DOOL spoilers, Kayla will be getting ready for her wedding day on Monday’s episode when she learns about a major crisis that is unfolding. Does this mean that her wedding to Justin will be canceled? Do things go as planned? As Days summer teasers indicated, one out of the four weddings will result in a funeral, so does this “major” crisis involve someone passing?

8. Justin Gets A Boost

On the other side of town, Justin will get some encouragement from Sonny, as both are preparing for his wedding day. DOOL spoilers indicate that Sonny will offer some reinforcing words to help boost Justin’s spirits. Justin may still harbor some guilt about being “happy” and getting married. It could feel like he’s betraying Adrienne.

As Kayla and Justin prepare for their wedding day, it is very uncertain as to whether or not the event will go as planned. DOOL spoilers hint that Justin will make a major confession to Kayla on Wednesday’s episode, but will they have already said their “I dos” when Justin drops this bombshell, or will it happen before then?

But, before Justin confesses something to Kayla, Steve will also have an announcement that he turns to Marlena and John for. What could Steve have to say to Jarlena, and does it have to do with Kayla’s wedding or the potential crisis that is unfolding on her wedding day? Only time will tell…

To further thicken the wedding plot, DOOL spoilers indicate that Justin will visit Adrienne’s grave near the end of the week, and see something unexpected. Why would Justin visit Adrienne the week of his wedding? What does he see at her gravesite that has him so taken aback? Could there be hints that Adrienne is still alive? If he does end up marrying Kayla, this could place him in a very sticky situation.

Meanwhile, across town, Days spoilers indicate that Xander will once again turn to Jack to confide in about Sarah. Could fans be seeing a budding friendship develop between these two men? They have a lot in common, and perhaps Jack can help Xander reform into a man that Sarah would want to be with!

Speaking of, Sarah and Victor will have a chat this week where he defends Xander to her. Could this be what she needs to hear to truly forgive him for all he’s done? Are these two en route to a potential reunion? Seems like it could happen, and happen soon!

Vivian Alamain is set for an explosive return to DOOL this week, and while she’s sure to stir up trouble at the Elani wedding, she might not get overly reprimanded for it. According to Days spoilers, Viv will turn to longtime nemesis Kate Roberts on Friday, asking for a favor. Will Kate laugh in her face, or lend a hand?

As the week rolls to an end, DOOL spoilers state that Gabi will head to Jake’s apartment unexpectedly, and is faced with something unpleasant. Could she witness Gwen and Jake together? Or, could Jake be attacked by more thugs and she happens to pop by during it all or in the aftermath? Either way, Gabi will not be happy with what she sees.