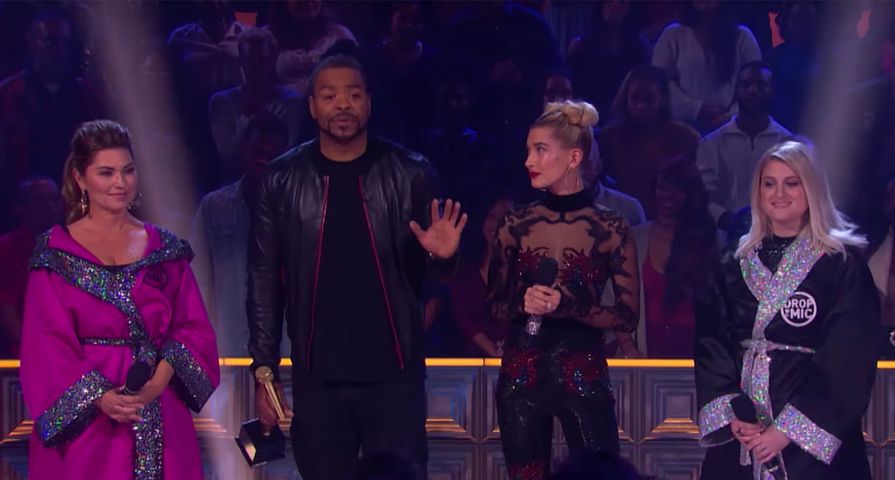 Our favorite late night hosts have inspired some of TV’s most hilarious celebrity-centric shows including Lip Sync Battle from Jimmy Fallon and now Drop the Mic from James Corden. There have been some truly entertaining and memorable Drop the Mic rap battles in the past, but Shania Twain vs. Meghan Trainor has to be one of the best.

With Twain being one of the sweetest singers in country music, no one expected her to be throwing out cuss words and dropping some major (yet, friendly) shade against Trainor, in the epic rap contest. Trainor opened the battle by rapping, “When I was told I’d be battling one of my idols, I wondered if beating her was worth the title.” The verse then took a snarky turn, when Trainor smirked and said, “Shania Twain? No problem, I thought you meant Dolly Parton.”

Twain was not phased at all by Trainor’s Dolly Parton and responded, “You expected Dolly Parton. Must be hard on you. Because when I heard Meghan Trainor, my response was, who? I’m busy selling records. F–k you’re right. You’re a Target back to school ad come to life. Yeah, I took some years off. I admit that’s true. I only did it to make room for new artists like you. But Meghan, I’m happy now to put you in your place. You don’t want trouble tonight because I’m all about that bass.”

Although the two talented ladies initially exchanged jabs, it didn’t take long before they couldn’t keep it up anymore with Trainor confessing, “I wrote this mean rap because they forced me to, but the truth is my whole life I’ve been obsessed with you.”

“I know we’re battling to see who’s meaner but I love you so much, girl. I didn’t want to do this either,” Twain replied, as the singers hugged it out.

Check out the full battle below: