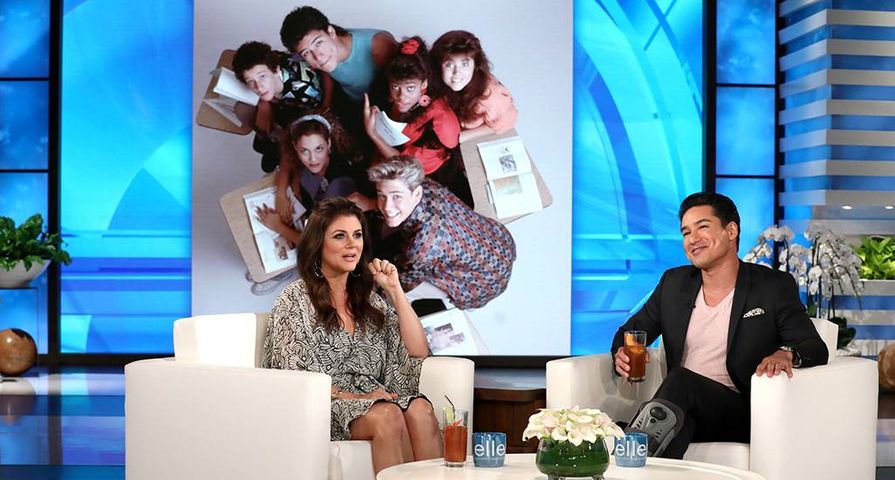 When Ellen can’t make a show she always calls on help and this time it was from Mario Lopez, who then in turn used the opportunity to host a mini Saved by the Bell reunion!

On Thursday, August 30, Lopez, who played AC Slater on the beloved show welcomed Tiffani Thiessen, who of course played Kelly Kapowski, to help him make some cocktails and promote her new cookbook Pull Up a Chair: Recipes from My Family to Yours, out October 2.

“This is what our 20-year high school reunion would look like,” Lopez quipped after Thiessen made her entrance. “We’re actually almost on 30,” Thiessen was quick to correct. “Oh my gosh. Shut your mouth,” Lopez joked back as Thiessen, “yes, we are that old people.”

The two teamed up to make some fun cocktails using recipes from the new cookbook before they sat down to have a chat where they inevitably went down memory lane about their former hit show.

Lopez asked Thiessen if her children were fans of Saved by the Bell and she revealed that just recently, her 8-year-old Harper “started watching it a tiny, tiny bit.” Thiessen explained that she quickly cut her daughter off of watching however. “I was okay with season one, but after that, when kissing started happening, I was like, ‘no,no,no we’re done!’”

While Harper was impressed by her mom’s show, Lopez revealed that his kids weren’t “feeling it.” “They’re like, ‘Daddy, why is your hair like that?'” he said.

Thiessen then revealed that Harper was “so into you and Mark-Paul” telling Lopez about her daughter’s crushes on the two lead men, and she added, “She’s so boy-crazy already. Oh, I have trouble.”

The Ellen DeGeneres Show kicks off its sixteenth season on Tuesday, Sept. 4.