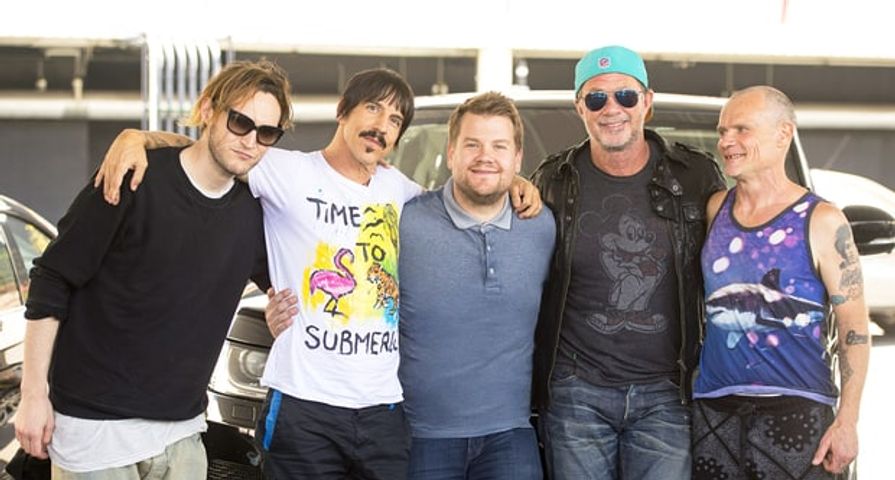 Things got a little crazy when the Red Hot Chili Peppers joined James Corden for “Carpool Karaoke” on the Late Late Show this week. But we suppose that’s to be expected when you team up a rock band!

The host drove around the 4 members of the band – Anthony Kiedis, Chad Smith, Flea, and Josh Klinghoffer – where they did everything from talk about Cher to take their shifts off. Yes, you heard that right. Near the end of the car ride, Kiedis and Flea shed their shirts, with Corden joining in. “As soon as I took the top off it made me feel great,” Corden said, having fun in the moment. “This is the weird thing about having my top off. If I’m in the car on my own with a top off I look weird. Somehow, the fact that the three of us have our tops off it feels completely normal. Am I wrong?”

As if that wasn’t enough, Corden and Kiedis wrestled on the front lawn of a random person’s home. You can probably guess who won that one, no?

In addition to their antics, the group sang some of the band’s hits, such as “Can’t Stop,” “Under the Bridge,” “Californication,” and “The Zephyr Song.”

Corden was clearly having a fanboy moment throughout the car ride.”I never expected it to be as much fun as it has been,” Corden told the group. “People say don’t meet your heroes, but I don’t think they ever met the Red Hot Chili Peppers.”

Check out the full video of James Corden’s ride with the Red Hot Chili Peppers here: