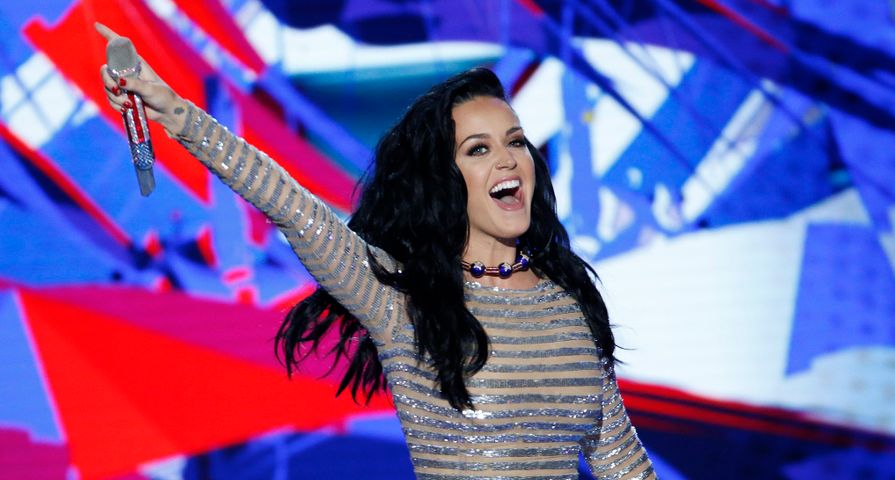 Last night at the Democratic National Convention Katy Perry made a brief political speech about who she thinks is the best fit for President and performed her latest hit “Rise” in front of a live audience for the first time.

The 31-year-old pop singer dazzled the audience in a sparkling floor length gown and said, “Both my parents are pastors and staunch Republicans. I didn’t finish high school. Unfortunately, I don’t have a formal education. But I do have an open mind and I have a voice. I’m asking you to have an open mind and to use your voice…Here’s how I’m going to use my voice: I’m going to vote for Hilary Clinton.” Perry continued on with her speech by adding, “I love Hilary. I have saved messages on my phone from HRC. You know I’ve got a closet full of Hilary-themed dresses!”

Cameras caught Perry’s boyfriend Orlando Bloom, 39, proudly snapping a picture of her on his iPhone while she made her speech and continued to film her throughout her entire performance. Bloom was also seen backstage with Perry moments before her performance, being supportive by holding her hand and talking with fans.

Perry finished off her speech by reminding voters that it’s not where they come from, but rather the person they’ve become. “So I am asking you to have an open mind and to use your voice, because on November 8, it will be just as powerful as any NRA lobbyist. You will have as much say as any billionaire…Because it’s not where you come from but what you grow into.” After her speech she gave two powerful performances of her hit singles, “Rise” and “Roar.”

The couple was last spotted out on a dinner date earlier this month at the Sunset Tower in West Hollywood. Before that, they attended the amfAR Gala in May at the Cannes Film Festival. According to a source at US Weekly, “They’re full speed ahead” and “They’re so into each other.”