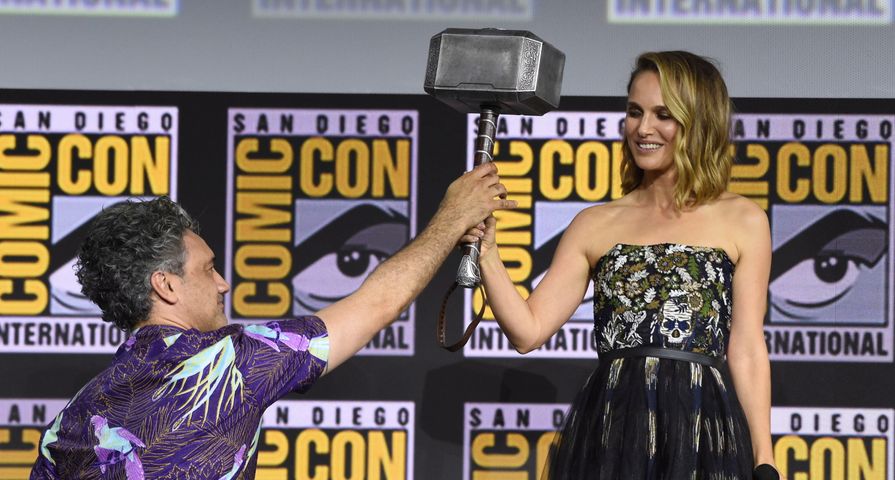 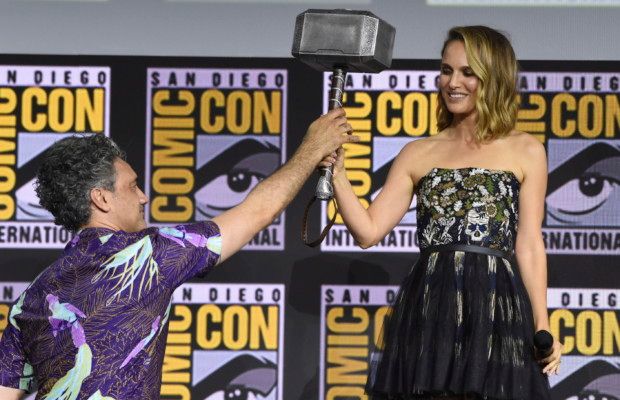 San Diego Comic-Con’s Hall H was full of major Marvel announcements over the weekend and one of the biggest was the revelation of the new Thor!

Marvel Studios President Kevin Feige revealed that Thor: Ragnarok director Taika Waititi would be returning to direct the fourth installment in the Thor franchise which is set to be titled Thor: Love and Thunder. While Chris Hemsworth will be in the film, the biggest news was that Natalie Portman’s Jane Foster will become the female Thor in the movie which is slated for a November 2021 release.

“Feels pretty good. I’ve always had a little hammer in me,” Portman told the cheering crowd.

Of course, fans will remember that at the end of the last Avengers film, Thor handed over New Asgard to Valkyrie who is the MCU’s first LGBTQ character, which will be more of a focus in the upcoming film. “First of all, as a new King, she needs to find her Queen. So that will be the first order of business,” Thompson told the crowd.

The women of Marvel continued to take center stage when it was also announced that the long awaited standalone Black Widow film will be coming with a May 1, 2010 release. Scarlett Johansson will be joined by David Harbour, Florence Pugh, OT Fagbenle and Rachel Weisz in the film. “I don’t think I could have played this version of Natasha 10 years ago. I get to play her as a fully realized woman. I’m looking to wipe out some of the red from my ledger,” Johansson said before the audience was shown the full trailer.

In addition, it was announced that Angelina Jolie, Richard Madden, Kumail Nanjiani, Salma Hayek and more will be staring in The Eternals which is set for a November 6, 2020 release. Anthony Mackie and Sebastian Stan will be starring in a brand new original series called The Falcon and The Winter Soldier which will stream exclusively on Disney+ in the Fall of 2020. Simu Liu, Awkwafina and Tony Leung have been tapped to star in the upcoming film Shang-Chi and the Legend of the Ten Rings which is set for a February 12, 2021 release. Elizabeth Olsen and Paul Bettany will star in the original series Wandavision which will stream exclusively on Disney+ in the spring of 2021. Tom Hiddleston will reprise his role of Loki in a standalone self-titled series on Disney+ in the spring of 2021. Benedict Cumberbatch will star in the next Doctor Strange film titled Doctor Strange in the Multiverse of Madness in theaters May 7, 2021. Jeremy Renner will star in a new Hawkeye series on Disney+ that will also introduce Kate Bishop. Finally, Mahershala Ali will star in a new Blade film.