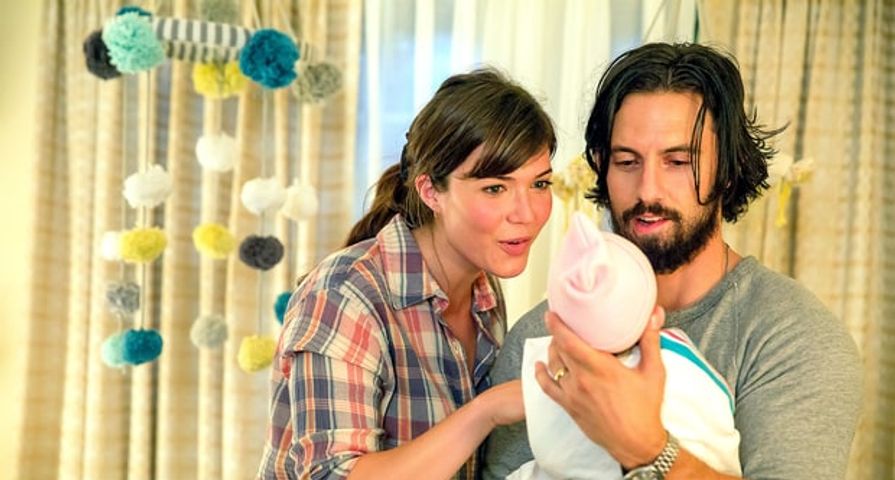 Playing a mom with triplets hasn’t scared Mandy Moore from having kids, instead she has baby fever.

The 32-year-old actress is now well known for her portrayal of Rebecca Pearson on the new hit drama This Is Us and told Conan O’Brien she is “totally ready to have kids” thanks to the part. “We have three extraordinary young actors on the show, who have fantastic parents by the way. They’re very attentive,” she said of Mackenzie Hancsicsak, Parker Bates, and Lonnie Chavis who portray the young Kate, Kevin, and Randall Pearson. “I think it’s a lot of their first jobs for most of them, and anytime there’s a scene that requires them to eat; I have to remind them — Milo, who’s my husband on the show — we’re always like, ‘Guys, slow down because you don’t realize you’re committing yourself to eating that same amount for the entirety of the scene, which can sometimes be a couple hours,” she said of working with the young actors.

She also talked about working with newborns for the parts of the show that flashback to her pregnancy and having the triplets. “I mean, we get to hold these newborn children, and I can’t believe their parents were willing to hand over their babies to me. I’m like, ‘Hi, I’m Mandy. I have absolutely no experience with small children,’ and they’re like, ‘Here’s my 2-week-old baby.'”

Regardless, the actress, who was married to Ryan Adams but is now dating Taylor Goldsmith, did say that she is thinking more about having kids. “I didn’t know how to change a diaper. I had crew members showing me how to change a diaper. I’m terrible, but yes, it has sort of activated that maternal side of me that I’m totally ready to have kids now.”